I just won (a rare event) an online game of Alhambra at Boiteajeaux, and I must say it is the strangest game I've played there (or anywhere). 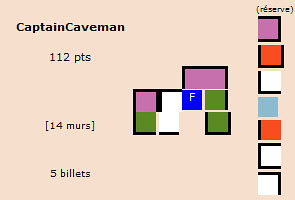 I had a great start, running out ahead of the rest of the players in this four-player game early on. My problem was that I boxed myself in with my nice Alhambra wall. The last seven tiles I purchased all went straight to my reserve. I had decent currency matches that allowed me to do this - I figured depriving other players of their points was worth the effort, and I planned at some point to swap out the lower white tile to open up my wall again. In the end I won 112-95-94-74.