I'm not ready to review this game yet, but I can share some first impressions after having read the rules and playing a partial game with Jacob last night. There is very little information out there regarding this game, so I figure a few folks might be interested in basic mechanics of gameplay. A simple Google search for the game reveals less than 10 hits, including one where there's an interesting reader comment about the game.

First, you must pronounce the name of this game correctly to play it - "chye-zo rising", not "cheese-oh rising". Think "ChineseZodiac". Ah, that was probably obvious. 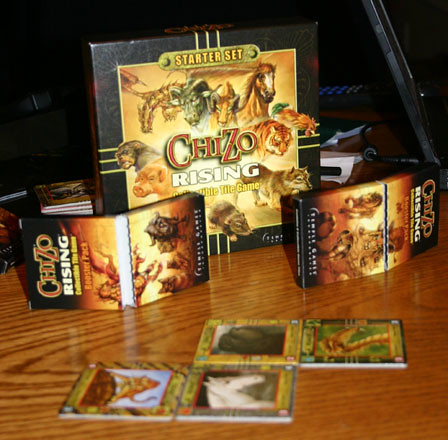 The ChiZo Rising starter set, which includes a fixed number of starter tiles with two boosters.

I purchased two starter sets that Jacob and I opened up Monday night after his football game (and before another trip back to the east coast at 6am on Tuesday - yes, I was in Portland for less than 24 hours). My box had the three creatures Dragon, Horse, and Dog. Jacob's had Tiger, Pig, and … can't remember what the third was because he never got a third creature out. The booster packs are not necessarily aligned with the starting creatures, which meant that out of our four boosters we had maybe 12 tiles (out of 32) that were unusable. This is expected in a collectible game I suppose. We pooled our boosters, trading tiles that worked with our respective creatures.

The goal of the game is to collect 12 capture points. Capture points can be obtained by capturing opponent creatures in battle, collecting sets of 4 neighboring compatible creatures, or by action tiles that give points (usually for a sacrifice).

Each player builds a deck with 40-60 tiles and draws five tiles for the starting hand. On your turn you can take two actions, with three choices for each action: 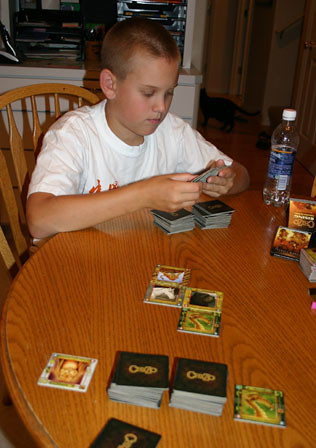 Jacob and I into our second turn.

Creatures played onto the table must be placed orthogonally adjacent ("neighboring") at least one other creature tile, the only exception being when there are no other creatures on the board. Creatures are placed with top away from the player playing the tile so that tiles can be distinguished from each other - there is one creature play area for the whole game, and the game supports 2-4 players.

You start an action stack by playing an action tile - these usually have some instant effect but some are permanent effects that stack underneath a tile. Each other player in turn has the opportunity to play a reaction tile on top of the stack (literally) until everyone passes once. Effects are then resolved top to bottom - I like the graphical depiction of the stack. It is possible for a tile to fizzle when it gets revealed in the stack depending on the other reactions already resolved.

All of this up to now is fairly standard CCG stuff, though the shared tile layout space is somewhat original. Where ChiZo gets interesting is in set collection: if you can manage to place the fourth creature tile and complete a 2x2 square of compatible creatures, you get to claim all four of those creatures as capture points. This can be tricky, as every creature in the set must be compatible with every other creature. The rulebook includes a compatibility matrix that I haven't quite grokked - there seem to be some interesting balance attempts in how they built this. For example, Roosters are fairly weak creatures but are compatible with a wider range of creatures than, say, the Tiger. This will certainly lead to some interesting deck building strategies.

What I don't know yet is if it is a fun game. I think it will be and look forward to playing it this weekend. The tile quality is mostly outstanding - I love the artwork and color treatments, and they did a nice job of using consistent backgrounds to link action tiles to specific creatures. I did notice that a few of the tiles had some punch-out issues with the paper backing tearing off - not cool as this allows you to identify tiles fairly easily from their backs. I wonder if this will be a pervasive issue in this initial product release.

Oh, the boosters packs are fun to open. As you can see in the top picture, they come 8 tiles to a box and the boxes snap in half, allowing the tiles to slide out.