Back in May I mentioned that Julie and I committed to doing a sprint triathlon this summer. This weekend Julie and I finished the Mid-Summer Triathlon, held on the NE side of Portland around Blue Lake. 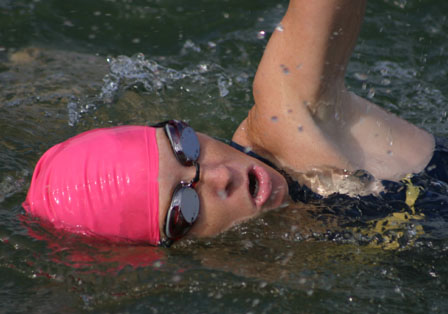 Julie swimming her first leg. She had a great time of around 13 minutes for the half-mile swim.

Saturday Julie participated in the women’s sprint triathlon, which is about half the distance of a full olympic triathlon (1/2 mile swim, 12.5 mile bike, 3 mile run). She set some lofty goals for herself and surpassed them easily; in fact, she finished 38th overall and 7th in her age division. 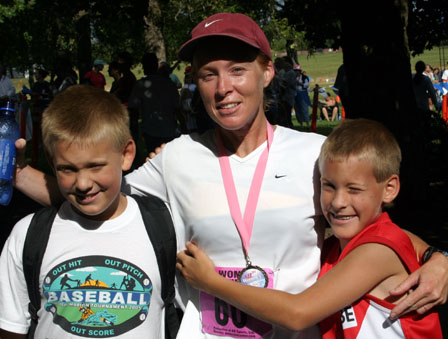 Julie with Jacob and Matthew after her finish.

I’m not surprised that she did so well, having trained with her. She has stayed in much better shape than I over the years and if she’s conitnues training I think she could become competitive.

After Julie’s event the boys participated in the splash, pedal, and dash event. This was a fun little event – 50 yard swim, 3/4 bike ride, 1/4 mile run. 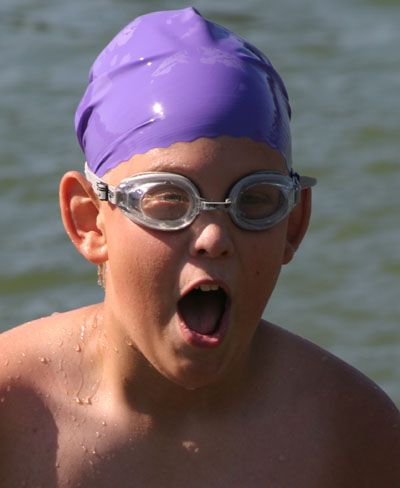 Jacob getting ready for his swim.

The best result from this event was that both boys are now very interested in getting into some more competitive events – we’re going to try and get them to run a 5k with us sometime before the end of the year. 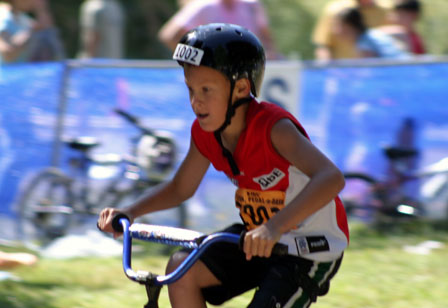 Matthew takes off on the bike segment.

I was more than a bit nervous about my event. The swim in particular is intimidating, even though I’ve been training for several months. Swimming more than a few lengths of a pool was unheard of for me just a short year ago, and I still think I have a ways to go technique-wise. I definitely have a ways to go conditioning-wise. My goal for the tri was to finish in less than 1:45 – to do that I thought I needed to finish the swim in 20 minutes. This is about the pace I’ve been able to do in the pool. 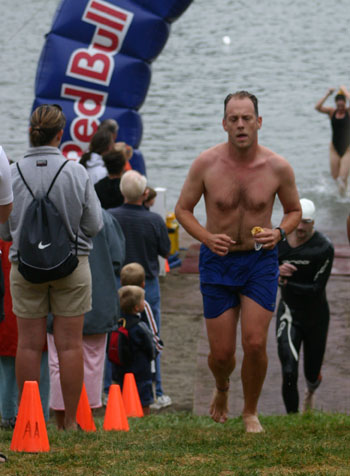 Here I am running from the swim to the transition area for the bike ride.

Things in the lake were a bit tougher than I expected. My split time there was around 23 minutes or so (results haven’t been posted yet). At least I know what I need to work on… 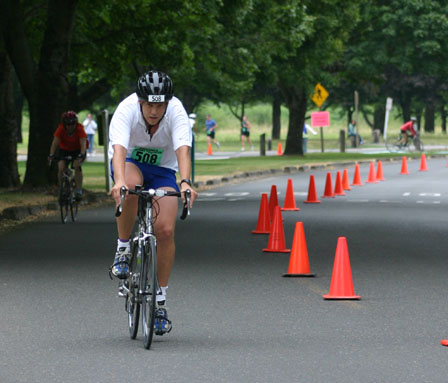 Near the finish of the bike leg.

The bike portion was a blast – mostly flat along Marine Dr. and the Columbia River. I was able to average about 16–17MPH without really pushing myself too hard. This is significantly better than I’ve been able to do around Sherwood on rides that involved more hill climbing and wind. I finished the bike in just over 45 minutes, just slightly over my goal. 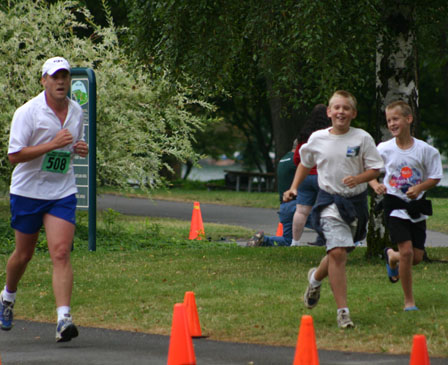 My chase team follows me in at the end of my run.

The run portion went almost exactly as expected. My pace these days is at around a 10 minute mile, which offers plenty of room for improvement. To think that in high school I could run about 6:30 pace… a small amount of weight loss and more speed training should get me closer to an 8 minute pace. 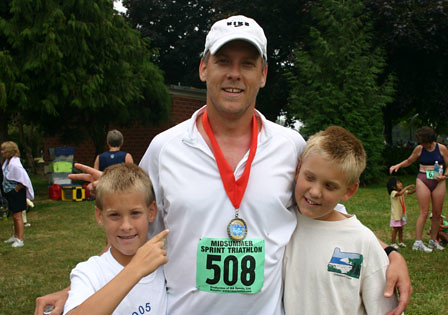 My supports with me after the finish.

In the end I’m glad I did it, but this is not something I want to do more than 1–2 times per year. Julie and I have committed to doing more events throughout the year (mostly runs) to keep us focused, then resume triathlon training in the spring for (perhaps) the same event. This is a great one for beginners as the bike and run are both flat.