After baseball practices from 4-8pm on Friday, we drove out to the coast with Julie's brother Mike to spend the weekend at Salishan with Jan (Julie's mom) and David. This morning I offered to teach David and Mike Ticket to Ride, the fantastic game from Days of Wonder. Friday at work during lunch I had a chance to play Ticket to Ride: Europe, which I think might be even better than the original. I'll save that discussion for another day...

Jacob and Matthew joined us so we played with 5 in all. This is an easy game to teach so we were off and running quickly. I had some solid early card draws (LA to New York and Santa Fe to Chicago), allowing me to focus on a contiguous long route that overlapped with a medium sized route. Matthew lagged behind everyone, having built only LA to San Francisco, and I started giving him a hard time about drawing random cards on every turn. He tends to get too focused on a single route and won't want to draw face-up cards if they don't help his immediate need. 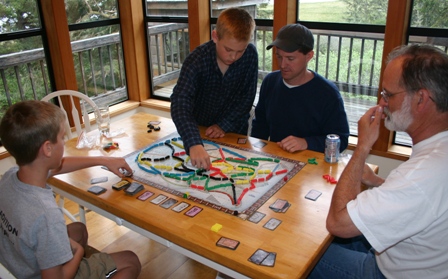 Matthew, Jacob, Mike, David, and I play Ticket to Ride.

As usual, Matthew had a master plan that was beyond the cognitive abilities of the rest of us. He built a long route (it would turn out to be the longest), looping around the west coast and through the upper half of Canada (of course scoring tons of points along the way as most of those are 5-6 train segments). As we approached the end of the game, Matthew had a substantial lead over the rest of us. I held out hope, holding 5 completed tickets with 4 of them being 15 points or higher. It would turn out to be not enough though as the longest route bonus for Matthew pushed him over the top.

Mike, Jacob, Matthew and I played 18 holes of golf during the day, and after dinner we decided to try a four player game of Einfach Genial. While I was hoping to play a partnership game, I thought it made more sense to start with the basic individual game so that everyone could see the core mechanic without being confused by team play.

I did need to consult the rules again, but we were playing within 5 minutes of setup. This was a very open game with very little blocking happening in the first 2/3 of the game. Mike and I competed for the lead, with each of us moving four of our colors to the maximum of 18 points. For all of us yellow was the weakest color, and I made a play late in the game that pushed my yellow count up to 13; I thought this would be enough for the victory. Mike managed to score 5 on his yellow, pushing him to 14 and blocking out any further yellow scoring for me. This turned out to be the decisive play as he ended up winning with 14 points.

Both of these games are great choices for introducing non-gamers to this hobby. Ticket to Ride has a great theme and lasts longer, while Einfach Genial is an easy to learn and enjoyable abstract. I suspect one or both of these might come out again tomorrow.