I was in the Phoenix area this week on business travel and managed to join some old friends in Tempe for an evening of gaming. I last met these guys back in September of 2003 on a business trip.

Scott Bailey was kind enough to host; this was especially convenient as his house was only about 8 miles from my hotel near the airport. Jason Sato arrived seconds before I and shortly thereafter we broke out the basic Carcassonne game with the Princess and Dragon expansion. This is a good choice to set up as folks arrive as it scales easily. As it turned out, three more people showed up over the next 10 minutes: Matthew Frederick, Kirk Bauer, and Shawn Asmussen. 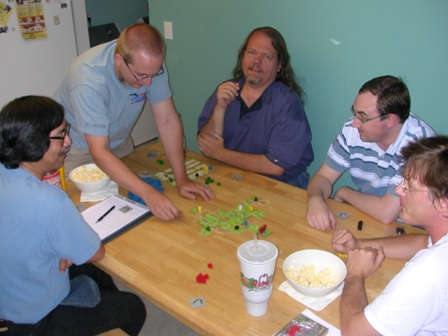 Jason, Kirk, Matthew, Shawn, and Scott join me in a game of Carcassonne: Princess and Dragon.

I'm not a big fan of Carcassonne with more than 3 players: it is almost impossible to plan ahead and a bit too chaotic for my tastes. Princess and Dragon makes it a bit more bearable, surprisingly enough because it increases the chaos in the game. The meeple-eating-Dragon also can serve as a bit of an equalizer and gives players the opportunity to go after the leader, something that is more difficult in the base game where there is very little direct confrontation. There are also some nice tactical plays to employee with the princess that can cause rapid changes of control in large cities. I give this expansion a thumbs up, though I'm unlikely to purchase it as Carcassonne isn't very popular at home. I believe Matthew captured the victory with me a not-so-close second place. No farmers in the fields for me sure didn't help.

Rather than try another game with six players, we opted to break into two groups of three. Jason had brought along his newly purchased copy of Australia, and Matthew and I eagerly approved of this as a choice for the three of us. 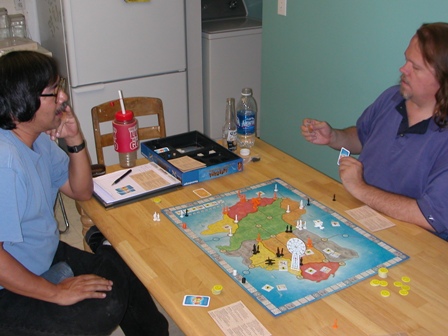 Jason, Matthew, and I about midway through our playing of Australia.

The theme in Australia is pretty nifty: players control a cadre of rangers (they look sort of like boy scouts) working on construction and conservation projects in Australia in 1920s. The mechanics are a bit difficult to explain here, but the basic idea is you want to fly in and drop your rangers into regions where they will be able to complete projects. There's a majority element here as players share in the rewards from the projects based on the rangers they have adjacent to the area where the project is, with the player that causes the project to complete through an action getting an extra three points. Rangers are placed by flying your airplane to a region (1 action) and playing a card that indicates a number of rangers that can be placed in that colored region. Cards provide a mix of income and ranger placements (the fewer rangers you are allowed to place, the more income you will receive).

We played with the advanced rules that incorporates a windmill and an additional mechanic for scoring points. When placing rangers in a region adjacent to the current location of the windmill (it moves around based on certain value construction projects being revealed), you have the option of placing one or more rangers on the windmill scoring track. Scoring on this track happens everytime a certain number of projects are completed. The scoring value on the windmill bumps up each time it is moved. 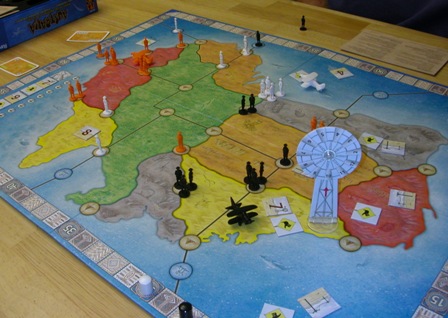 The game board in Australia.

I enjoyed this game more than I expected based on the lukewarm reviews that I've read, though this could just be another manifestation of Cooley's Law as I won by a decent margin. I would gladly play this one again and will consider adding it to my collection.