I purchased Europe Engulfed (GMT Games) about a year ago but had never made it past putting the stickers on the blocks and setting up a scenario to see how it went together. This is a big game with over 280 wooden blocks but seemed approachable given my affinity towards the Columbia block wargames. I attemped to play via email / Cyberboard last year with my friend Doug Walker, but I think that's a miserable way to learn a new game plus I had a hard time visualizing the entire gameboard on my small screen.

Doug Cooley had the same dilemma so we decided to schedule some time to get together and give it a go. Doug graciously offered to host; I had yet to make it to his place so that was an added bonus. We decided to start a full campaign game knowing we wouldn't finish. 1941 was a decent starting point as it would allow us (hopefully) to get all the way to American entry into the war. 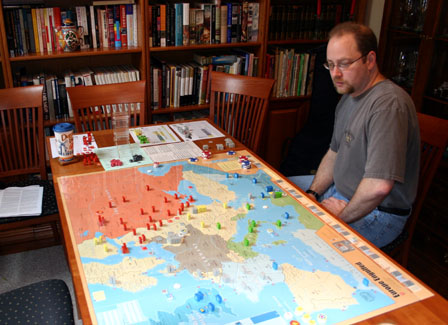 We started in 1941. Russia / Germany are at war, France is already toast, and the Germans have rolled through Poland and the rest of Eastern Europe. Next stop, USSR. See those red blocks in the upper left of the screen? Those are about to leave the board.

First, a warning for you casual Euro-gamers out there that might have enjoyed Hammer of the Scots or Liberty: this is not a light wargame. Doug says it better than I can:

What is complicated is that every single country has special rules.
Finland, for example: Can't leave Finland until the Germans are in
Novgorod (encircle Leningrad), and then can only go into one area.
Can't be in a space with, say, Hungarians. You can get a free step, but
not if you got one for them the previous turn. And that's just the
Finns, you should see the French, Vichy or otherwise.

So while the game uses a very straightforward combat and movement system, the political rules are killer and were cause for much checking and re-checking of the rules. That's OK - it really is needed to create a reasonable theater-wide simulation. The mechanic that makes this game especially interesting is the Special Action. Special Actions can be purchased during the production phase (each major power has hard limits on special actions, c.f. the political rules :-) and represent the abilities of the major powers to focus political and military resources to achieve specific strategic objectives. Examples would include the blitzkrieg actions by Germany early in the war and the invasion of Normandy. In the game Special Actions allow players to conduct breakthrough movement and combat, retreat, reinforce from adjacent areas, etc. I like it because it keeps players guessing and adds a bit to the "fog of war" as well as the economic simulation.

I played the Allies, so that meant managing the Russian devastation, retreat, conscription, reinforcement, repeat and rinse. Oh, and I got to attack once in North Africa. 5.5 hours into the game and 4 turns later (there are 6 turns in a year) we called it quits. 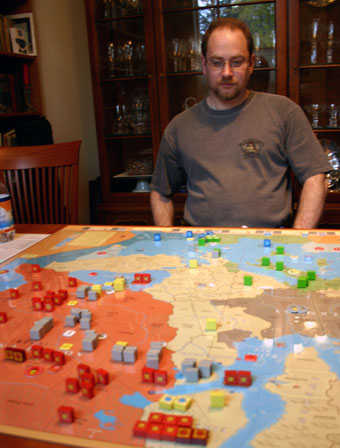 The final board layout in 1942 before we cleaned up. See all those grey blocks in Russia? Hey, at least I kept him out of Moscow and Baku.

I had a lot fun, and we were really building momentum by the third turn. I think our first 2 turns took three hours and the last 2 about 1.5 hours (we broke for lunch over at the Lucky Lab). I suspect we could play a full turn in 30 minutes at this point, so theoretically we could play an entire campaign in a single long day. I'm hopeful for another play within the next few months - maybe I can talk Jacob into a go. 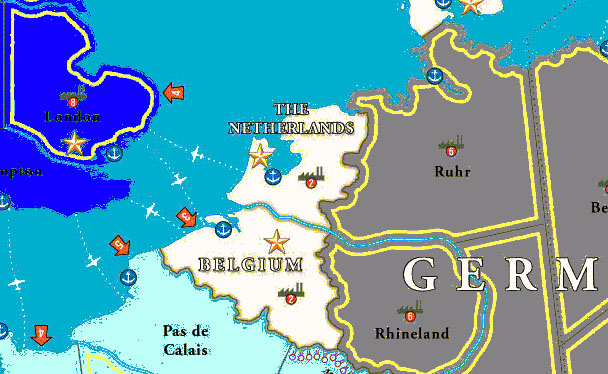 Oh, and George was looking for proof that his homeland The Netherlands were represented in the game. Here it is George!