We invited the Humphrey and Rude families out to Salishan for an extended weekend of fun and games. This was our first test of the house for a large group of guests, and it went extremely well. We had a total of 13 people staying at the house and pretty much everyone was able to sleep on a bed in relative privacy (with their own family). Jacob and Matthew camped out on the floor in the master bedroom - we need to fix this next time as that's rather uncomfortable.

We had mixed weather over the Thu-Sun extended weekend - Thu and Sun were nice, but Fri/Sat were mostly rain with frequent high winds. Interleaved with the gaming at the house were frequent trips to the Salishan Lodge swimming pool, beach walks, a trip to the batting cages / miniature golf / arcade, a tidepool hike, and a beach football game.

The rest of the story I'll tell with photos... 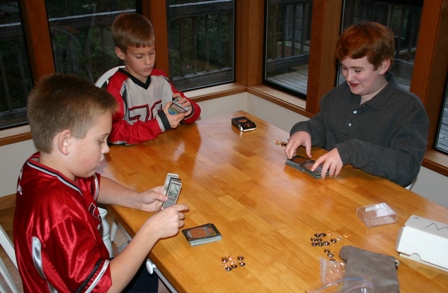 Jacob and Matthew brought out Magic decks early on, and this would prove to be a constant activity over the weekend. 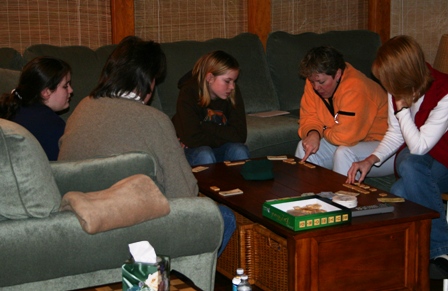 The women break out the fine Buyword game on the first night. I don't think it was well received. 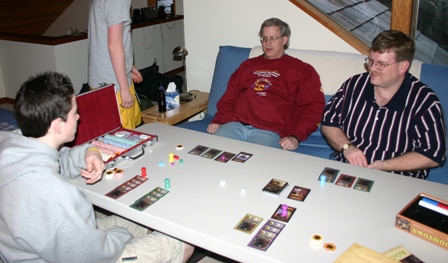 Josh, KC, Ken, and I played Boomtown the first night. Josh crushed us, but it was a learning game for everyone but me. There's a strong luck factor to the game, but it is fun. 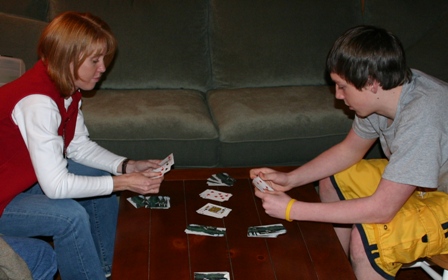 Julie and Justin play their first game of speed. They would play a total of 28 over the weekend, splitting the match 14-14. 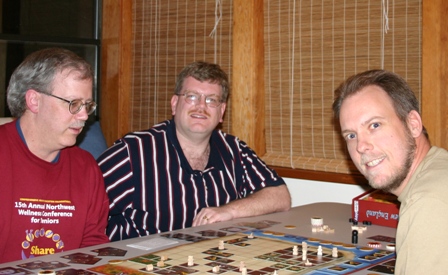 KC, Ken, and I play one of my favorites - New England. KC pulled out a narrow victory. 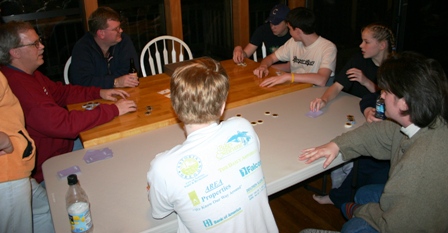 I planned a few special events over the weekend, the first being a Texas Hold'em tournament with prizes for first, second, and last place. Everyone got involved and had a great time. Rita won the last place prize (Kill Dr. Lucky) and earned the right to deal for the rest of the tourney. Chelsea took second, winning Oceania for the Rude family. KC was the tournament champion, winning the two-player game Jambo. 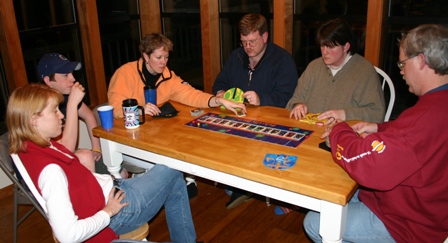 After the poker tournament the adults sat down for a rousing game of Schrille Stille. 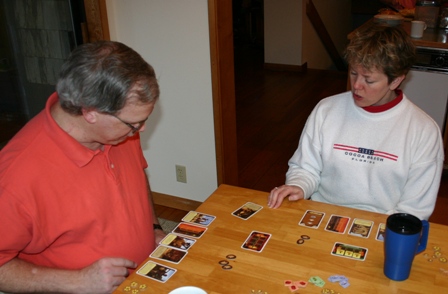 Now it is New Year's Eve (Friday), and the day starts off with some two-player gaming. I taught KC and Rita their new game Jambo - I think they like it a lot. 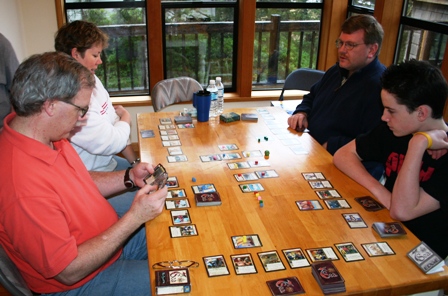 All of Friday afternoon was spent playing a 5-player game of the great trading card game 7th Sea. This a great multi-player CCG, its main detractor being the extraordinary amount of downtime when two players are resolving a boarding attack. Josh cut out early to join the other kids, but the adults hung in till near the end - we had an early dinner and had to call it short. Rita, Ken, and I were all in and strong when we called it quits. 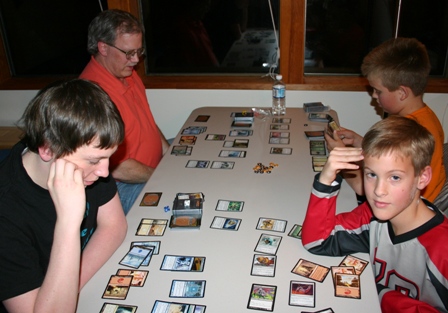 The special event for New Year's Eve was a sealed deck Magic tournament with tournament packs from Mirrodin and boosters from Darksteel. This is by far my favorite tournament format. I ran it swiss-style and we had 8 players. Ken and I were neck and neck throughout the tournament, but in my second to last match Matthew pulled out a draw (we played two games per match), putting me a half point behind Ken going into the final match. This meant I had to to win both games to win the tournament, while Ken only needed a draw, which he was able to achieve. 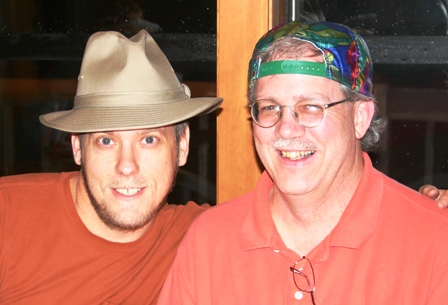 After the Magic tourney we played a 3-on-3 game of Magic general, which is a special format where each team has a general with a lieutenant on his right and left flank. Ken and I squared off as the two generals - I had KC on my left flank. 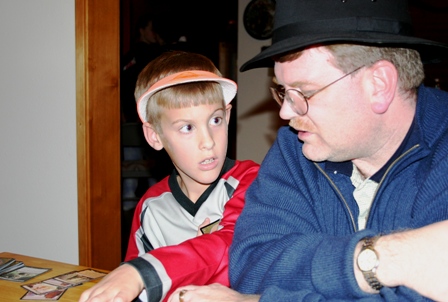 Ken had Matthew on his right flank and won the match. 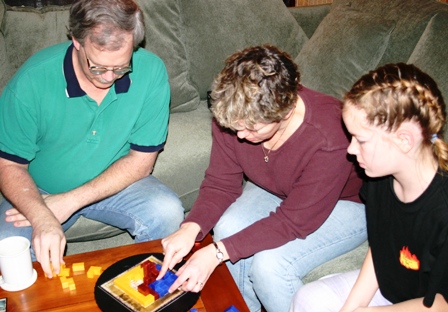 On Saturday morning the Humphreys brought out Rumis, an abstract building/block laying game that we gave them for Christmas. The game plays quickly and I like the variations that are built into the game. 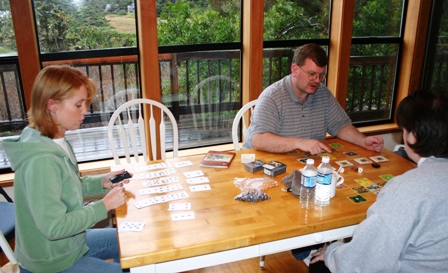 Julie plays some solitaire while Ken and Tracy play a game of Settlers of Catan: the Card Game. 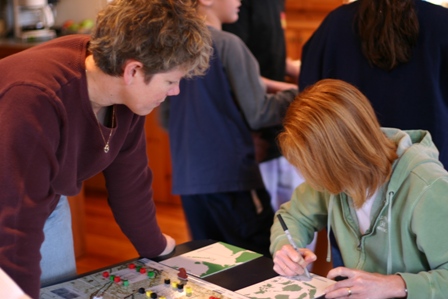 Saturday afternoon KC brought out a game I hadn't heard of: VOC!. We played the basic game, which I think is meant to teach the core mechanic of the game: tracing a shipping route on a wet erase board with your eyes closed, trying to avoid land masses and arrive at ports! Players work together to give advice based on the number of sailors they have on the player's ship. Big score in creativity, but the game play itself was very lacking. KC and I read ahead into the advanced rules, which brings a much better strategic element and trading process to the game. I look forward to trying it again. 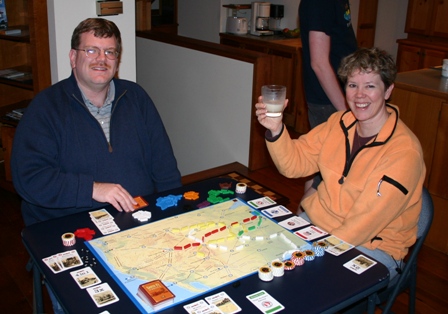 I picked up Santa Fe Rails last month at a sale at GMT Games. This game has real promise - in hindsight, we all agreed we placed way too little emphasis on city cards, forcing a premature ending to the game as we built out all of the major lines quickly. In fact, non of the short lines ever came up. I'll be playing this again soon and will give a report. 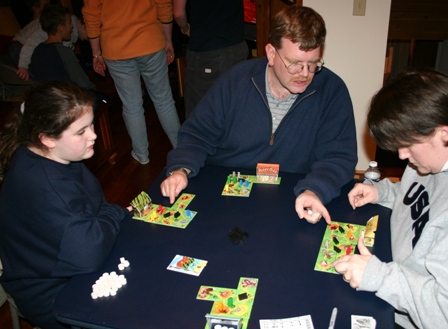 I taught Chelsea, Ken, and Tracy one of my favorite games for kids: O Zoo Le Mio. I think the Rudes really liked it, especially Chelsea (maybe because she won?). 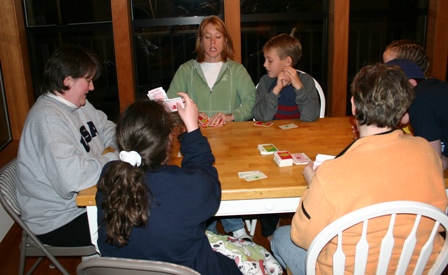 The final evening consisted of an Apples to Apples game, a draft Magic tournament, and a little more poker.

I expect to try this again next year - I can't think of a better (or safer) way to spend the New Year celebration. This was also a good warm-up for a gaming event I'll be holding out at the coast towards the end of January.