I've managed to attend a few different gaming sessions over the past 10 days. Two Saturdays ago Jacob and I traveled to Vancouver to attend a game day at Doug & Mimi's - our first time there in quite a long while. As always their hospitality was first rate - swedish meatballs, good wine (OK, I brought the wine), and great company.

I jumped on the opportunity to play Anno 1503, a title I've wanted to play for a while. Opinions are certainly split on this game (it has a relatively low BGG rating of 6.63 right now), and while it was enjoyable I doubt this is a game I would ask to play very often. 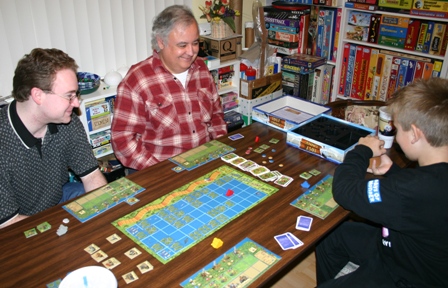 Tyler, Doug, Jacob and I play Anno 1503. The board in the middle represents only a small portion of the game (island exploration) - most of the action occurs in each players' individual area.

Some have classified this game as multiplayer solitaire, but I think that's a bit harsh. There was plenty of player interaction (dialog, tradeoff discussions) - much more than in the St. Petersburg game that followed. I just didn't see much that was new or interesting in the game. I would much rather play a new Settlers scenario if I want a resource acquisition / building game (and Settlers has trading - Anno does not), or Entdecker if I want to play an exploration game. 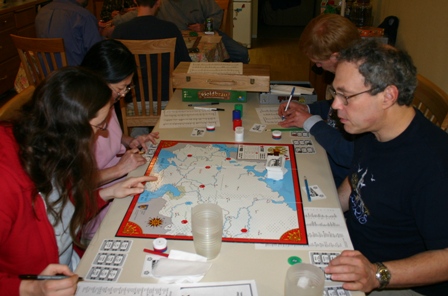 Another group decided to play the new crayon rail game Russian Rails. I jokingly commented 'see you in 6 hours,' which turned out to be not far from the truth as they were still playing when Jacob and I left 5 hours later.

Jacob and I finished the evening with a game of St. Petersburg with two folks we'd never met before (and I forgot to write down their names! one of you reads this weblog, so please write your name in a comment to me). This was a four-player game with three fairly seasoned players plus Jacob - he is still learning the ropes to this game and it can be a rough ride when you are playing with players with experience. 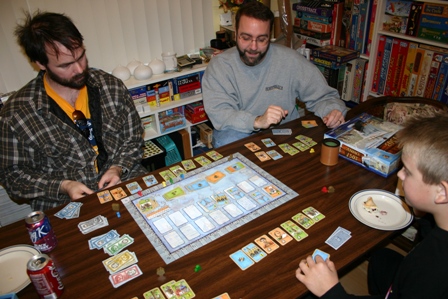 St. Petersburg was our final game of the evening.

That was it for Saturday. The following Thursday evening I was in the Tigard/Beaverton area for a district scouting meeting, so I stopped by Mike's place for my gaming group's Die Hard Thursday event. Tim was also there and my arrival was timed well. I suggested Hansa, the game of trading and merchants of the Hansiatic League. A fairly dry (surprise) game, but I found it to be quite unique and fun. It played quickly and I would like to see this played more in our group. 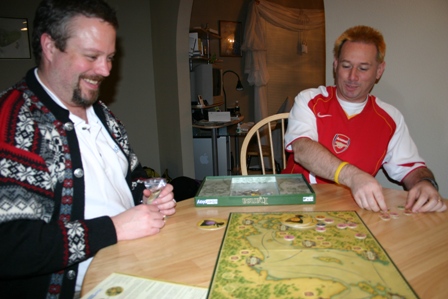 Tim, Mike, and I playing Hansa.

There's a real arc to this game and Tim played well, transitioning to populating as many merchants in cities as he could towards the end of the game. Mike and I caught on a bit late but were able to close the gap and tighten up the game. I finished second to Tim a couple of points behind, I think Mike was one point behind me.

Next up was what is quickly becoming my favorite trick-taking card game, Die Sieben Siegel. I played my best game so far, winning by a relatively large margin. I'm not sure this is a great three-player game, but we did have fun. I think it is probably quite a bit more chaotic this way as it can be difficult to assess hand strength when one player chooses to be the traitor. 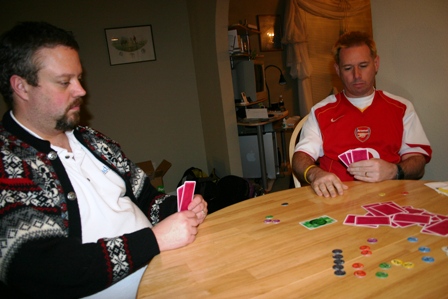 We finished the evening playing the Steven Segal game.

The next Friday was our weekly gaming session at work. Eric Landes and I decided to start this a while back and we are starting to promote it a bit more. We have new tenants sub-leasing space at our corporate HQ and, as they share the cafe with us, we thought it made sense to publicize what we are doing and make folks feel welcome joining us. We'll see if attendance picks up beyond the 4-5 regulars we have now. Eric did a nice promotional flyer for us: 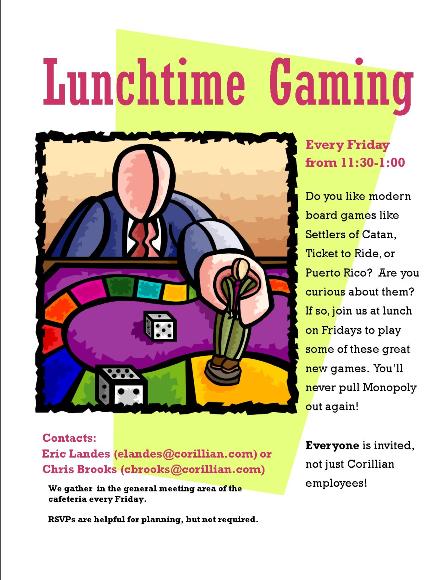 Last Friday we brought out the Knizia classic Samurai, one of the first games I picked up after re-entering the gaming world two years ago. This game is extremely easy to teach and learn but has some great depth. Arron enjoyed the game enough that he went out and bought his own copy at Rainy Day Games. I was the winner in a close final showdown with Jason.