It's Christmas Eve and I finally have a few spare moments to post some pictures and a narrative of our recent Caribbean cruise on Royal Caribbean's Voyager of the Seas. We'll be back to run-of-the-mill gaming postings before you know it.

Earlier this year I reached out to our extended family to see what the interest might be in a family cruise around Christmas as a way to get everyone together without the burden of one family hosting. It was also an opportunity to get my side of the family together with Julie's. My parents, Julie's mom & stepdad, and Julie's brother David and his wife Lisa all decided to participate. 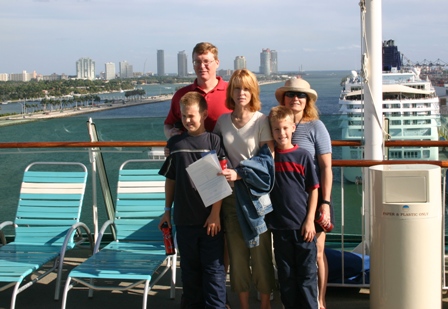 Julie, Jacob, Matthew, brother Dave, and sister Lisa shortly after boarding the Voyager. You can see another smaller ship in the background - we are still in port.

I was eager to give cruising another shot. We did a Disney Cruise back in 2000 (4 days at Disney World, 3 days at sea) and weren't terribly impressed, especially considering the cost. My parents cruise quite a bit a think highly of Royal Caribbean, and the Voyager class ships have a lot to offer kids. It is hard to describe how massive these ships are, though it does help to see them alongside other ships in port. 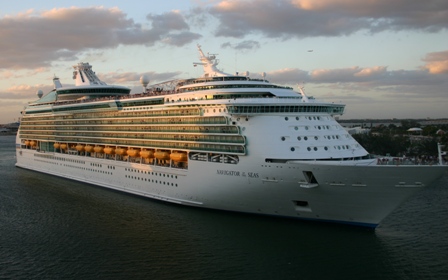 I took this picture of the Navigator of the Seas leaving port ahead of us, which is virtually identical to our ship. Fully loaded with passengers and crew, this ship tops out at around 4,500 passengers.

We opted to pay a bit more for rooms with outward facing balconies on the 9th deck (there are 15 decks in all on this ship). Jacob and I tend towards sea sickness so being able to breath fresh air, see the horizon, etc. were very helpful. Quarters are definitely cramped with all four us together in a cabin, and Julie and I both wonder how much longer we'll be comfortable sharing a room with both boys. Jacob and I enjoy a game of Fluxx on our balcony.

The service and food were outstanding - I'm convinced our Disney Cruise experience was an abberation. We ate breakfast most mornings at the Windjammer Cafe buffet - they have the most flexible hours and we were often off to an early (7am) start to get onshore to our current port. Dinner was at 6pm sharp each evening in the impressive 3-story dining room (there's one each fore and aft). There were two scheduled formal nights, though for the second one we opted for dinner at Portofino's. This is their extra charge but nicer offering and it was well worth the added expense. We left the kids in Adventure Ocean, the kids program, where they had dinner at Johnny Rockets, a 50's style dinner serving burgers, shakes, fries, and onion rings. 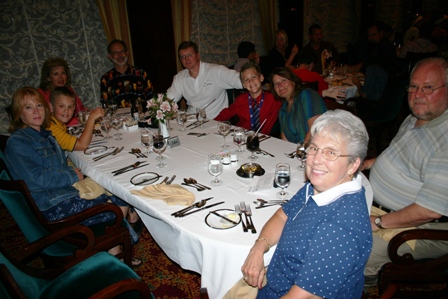 Our dinner table on one of the more casual evenings.

Matthew loved putting on a tie at night, choosing to wear it on even the casual evenings. The entertainment was better than I expected. My two favorites were Beatlemania, one of many Beatles tribute acts roaming the planet, and the ice show. Yes, an ice show on a cruise ship that was as good as anything I've seen in a full-fledged arena or on TV. The low point entertainment-wise was a comedian who probably hadn't updated his material in 15 years - he continually poked fun at these new-fangled music groups like the Beastie Boys and Hootie and the Blowfish. 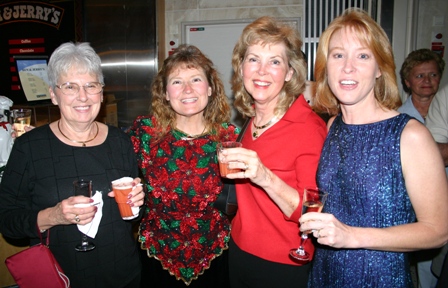 The lovely ladies enjoying some free drinks on the promenade.

We had mixed experiences onshore at the various ports. I refuse to pay $200 to let someone drive me to a beach and show me how to snorkel, so I planned out all of our self-led excursions ahead of time. Our first stop was Nassau, the Bahamas, and unfortunately we encountered fairly high northerly winds (20-30 knots) which didn't make for the best beach weather. We caught a taxi over to Paradise Island and hiked for about 30 minutes to a decent area for some snorkeling. Jacob saw a stingray and we saw a few fish and crabs but overall the snorkeling was poor. The beach hike was fun though and the scenery beautiful.

St. Thomas was the highlight for the week. After arriving in port, we caught a cab to Red Hook where we booked passage on a ferry to St. John for some snorkeling. On St. John we caught a taxi to Trunk Bay, a magnificent white sand crescent beach with fabulous snorkeling. There's actually an underwater trail you can follow with sign-posts describing the reef, fish, and other characteristics of the bay. 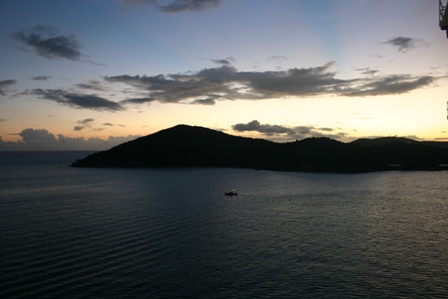 A view of the bay in St. Thomas before our departure.

We took a lot of pictures underwater with a disposable camera, so once I develop those I'll post a few shots. We saw a wide range of critters, including a moray eel, angels, parrot fish, brain coral, and more. The weather was perfect and we all had plenty of time to just relax and enjoy the beach.

Our next stop was San Juan, Puerto Rico. We had limited time in port (7:30am - 1:30pm), but based on some research I did I thought we would have time to explore El Yunque, the rainforest outside of San Juan. Rather than cab it, I opted to rent vehicles and drive ourselves. The plan was OK, but the execution less than perfect. First, the car rental office we used near port took over 90 minutes to get our cars to us. Second, traffic was horrendous, and it took us over 90 minutes to get to El Yunque. You can do the math for yourself - we ended up with about 30 minutes in total to explore. Next time, given the limited time in port, I would probably just explore Old San Juan. 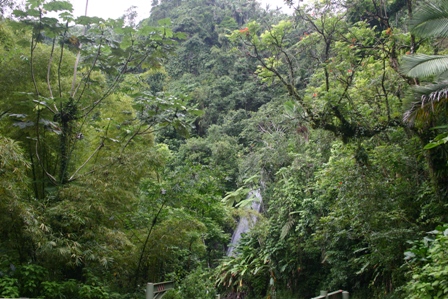 Look kids, El Yunque. Quick, get back in the car and stop crying - we need to get back to the ship.

Our final port was to be Labadee, the port/beach that Royal Caribbean leases in Haiti. This should have been a fun final shore trip (kids water play area, snorkeling, beach bbq), but unfortunately the seas were two high to operate the tender service to get us onshore. The captain informed us early morning that we would not be able to visit and that we should plan on enjoying another sea day. Bummer, but this is one of the risks you take doing a cruise in December. 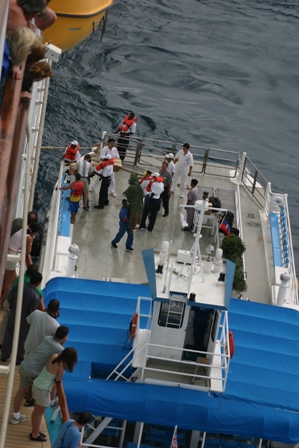 This is the tender used at Labadee. We hooked up to exchange some people and goods. Here you can see them transferring Christmas trees from the Voyager to the tender.

Our sea days were spent exploring the ship, participating in art auctions, and after we discovered it, playing shuffleboard. 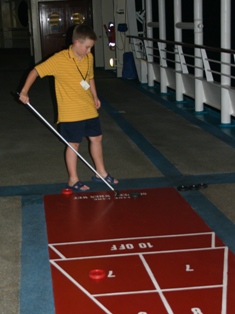 Jacob and I playing shuffleboard late one evening

The interior of the ship is impressive. The promenade is an open shopping and entertainment area that feels like a narrow city street. Below the promenade is the ship's casino that we walked through several times but never stopped for any gaming. We did participate in every trivia contest we could find though, winning at least two of the competitions. 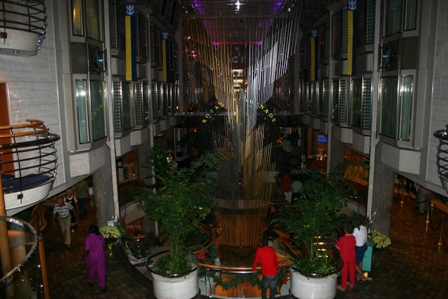 The promenade at the center of the ship.

I would definitely recommend Royal Caribbean and the Voyager line of ships. It certainly doesn't have an intimate feel, but I was surprised at the quality of service they are able to provide to search a large group of people. Perhaps this will become a regular event for us every two years or so. 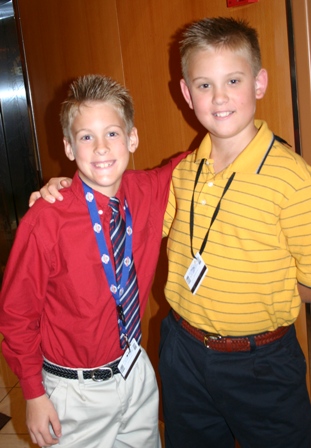 Typical dinner attire for the boys. Matthew, where's your lanyard?!