Tonight I had the fortune of spending a few hours gaming with the Billabong Boardgamers of the greater Melbourne (Australia) area. Alan Stewart was kind enough to extend an invitation to me, and with the Amaroo Neighbourhood Centre only a short train ride away I couldn't resist.

As usual, after meeting several of the members face-to-face, I was reminded of how small the board gaming world is. One of the regulars, Craig Macbride, has gamed with Tom Powers and the other Microsofties (Tom runs Boards & Bits and I've gamed with them a few times) while visiting Seattle. Julian Clarke, owner of Unhalfbricking Games, is acquainted with owners of several American publishers that I know (Jeremy Young of Uberplay and Eric Hautemont of Days of Wonder).

There were 10 of us in total at the centre, so we initially divided into three groups 3/3/4. I opted to play St. Petersburg with Duncan and Julian. Duncan was clearly an experienced player, having read quite a bit of the commentary on BGG and knowing key strategies. I've been playing the fine PC version quite a bit while traveling so I think I've got a pretty good grasp as well. So Duncan and I quickly taught Julian the rules and helped him along with strategy as we played. Not that he needed much help - he quickly grasped the rules and was leaping to good strategy early on. 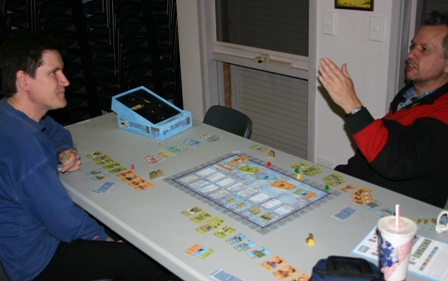 Duncan and Julian about half way through our game of St. Petersburg.

Julian maintained the VP lead most of the game, with me close behind. Duncan trailed most of the game by 20-30 VPs, but I kept a close eye on his accumulation of aristrocrats. Fortunately (for me) in the final round I was able to grab the only aristocrat upgrade, giving me 7 distinct aristocrats and enough the squeeze out a narrow victory over Duncan, who finished with 10. Julian managed to get 5 (I think), finishing about 10 points behind me. I still enjoy this game quite a bit, though as some have complained there seems to be somewhat narrow paths to victory. 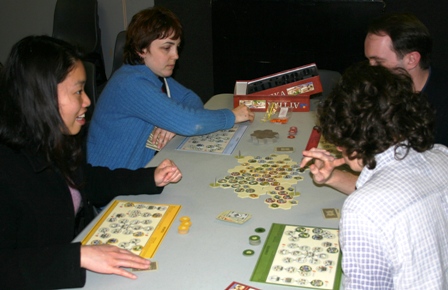 While I was playing St. Petersburg, another group played Attika. 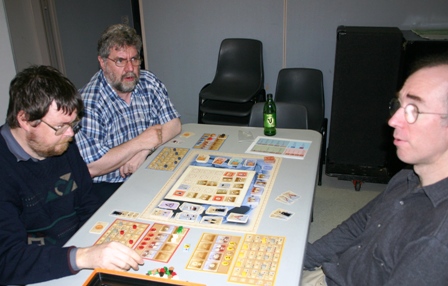 It was a tough choice opting out of Goa and playing St. Pete. I've played this only once but can't wait to try it again. Apparently this was a close game, coming down to a tiebreaker at 41 points.

While waiting for the other games to wrap up, Duncan, Julian, and I played a hand of Coloretto. This is a fun little card game that I haven't played in a while; not sure why because it really is a lot of fun. 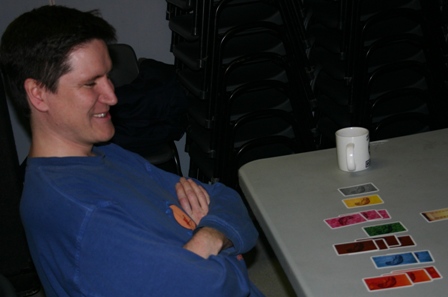 Duncan showing off his rainbow spectrum of cards in Coloretto. He still managed to win.

I thought I was doing OK, but Duncan managed to win the hand despite a rather diverse collection of colors. 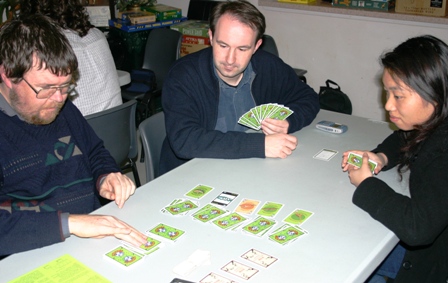 This game is called Extinction. Doesn't get very good ratings on BGG.

Next up for me was Einfach Genial with Craig and Brian. This game just didn't appeal to me based on what I'd read, but I was anxious to try it anyway. I know Dave has had some nice things to say about the game (he is a huge Knizia fan, after all). This is an abstract game of hex-tile laying (the pieces are actually two hex tiles) where points are scored based on the number of other connecting hexes of the same color as the piece you played. Players score across 6 different colors, with the winner being the player with highest low score (just like the scoring in Tigris and Euphrates). 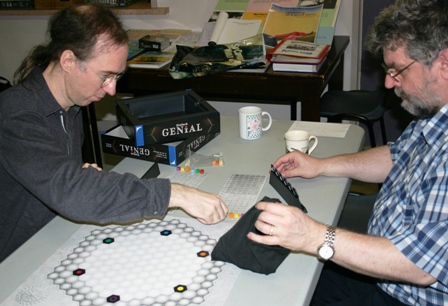 I found the game to be engaging, quick, and very fun. Our game was tight and could have gone to anyone. Craig made a good blocking double-move at the end that took away any possibility for me scoring in my weak color at the end. This ended the game with a tie at 10 for Craig and Brian, Brian winning the tiebreaker. I finished at 9. 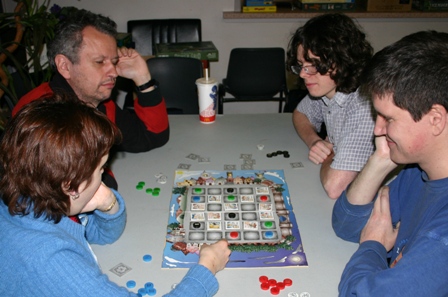 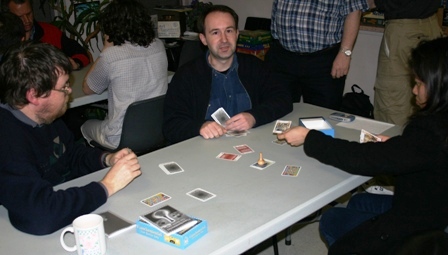 While waiting for some other games to wrap up, I was able to teach and play a couple of hands of Tres Amigos, one of KC's card game prototypes. We played with the three-player rules and opinions were fairly neutral. It is likely the rules I was playing with were a bit out of date, as there were too many cards in the undrawn stack (under the face-up trump card) adding quite a bit of chaos into the system. I need to check with KC on this.

Finally, Duncan and I taught Craig and Brian the fine Uberplay game Saga. This is a light card game that I first played at GenCon with Jacob this year. It has some subtleties to it that I don't quite have handle on yet, though in this case I must have been doing something right as I won 56 / 36 / 30 / 5. I can't figure out if this game is too chaotic / luck driven, or if it really is possible to control the pace and end of game.

Thanks again to the Billabong Boardgamers for hosting me. Let me know if you ever make it out to the Portland area!