I awoke this morning at about 4:30am local time. Not too bad in all - that's about 7.5 hours of sleep and I'm on may way towards adjustment. I wanted to go for a run along the river, but it was still dark so I decided to play some Middle Earth: the Wizards solitaire. I've owned this game since 1995 but never got a chance to play it and it has sat on my shelf all this time (next to my stash of Magic cards). Back in 1996 I also purchased the book Middle-Earth: The Wizards Companion. This is a better (i.e., more readable) version of the rules than you find with the starter decks, and also has some solitaire rules and interesting scenarios.

Last week a box of preconstructed challenge decks arrived at home, so I was eager to give this game a try. Part of my inspiration to give it a go was Chris Farrell's high opinion of the game, particularly before some of the later expansions were shipped. Oh, and this is why I picked up some D6 yesterday. 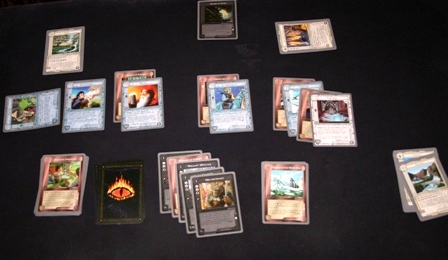 The cards sitting on my ottoman in my hotel room.

There are quite a few similarities to the Lord of the Rings TCG, which I have played quite a bit. Or, should I say, the LOTR TCG bears a lot of similarity to METW. There is a movement mechanic to both games, and conflict is created by opponents challenging you while you move your group(s). Thematically I think METW is much better, primarily because a big part of deck construction involves matching characters, items, and sites they will travel to. If you want to recruit Treebeard as an ally, you must travel to Wellinghall to get him. The rules for moving in METW are extremely confusing at first though; this is one game where it really would be best to be taught by someone in the know. Hey, maybe I can become that person now.

Here's a summary of the solitaire rules from the book:

I only got through my deck once, and as I mentioned I wasn't drawing enough hazard cards (though I was playing the right amount). It was a slow process of referring to the rules, playing a little, double-checking the rules, etc. I do think I'm getting a grasp of the game and look forward to playing it face to face.