I'm not a big-time fisherman; you won't find me watching many fishing shows on TV and I rarely purchase my own fishing tackle. The sport has always facinated me though, and I've probably fished a few times a year for most of my life. Growing up it was mostly the hook-and-bobber sort, though once I got into high school and then college I started to learn the art of fishing with artificial lures; first with spinning gear and Rapala-style lures (thanks to my friend Bob), then fly fishing (thanks to my friend Mike who took me to Colorado for a summer).

At Keuka Lake the boys and I will often fish from the dock, usually catching panfish like bluegill, rock bass, perch, and largemouth bass. Every so often we'll catch a nice fat catfish. 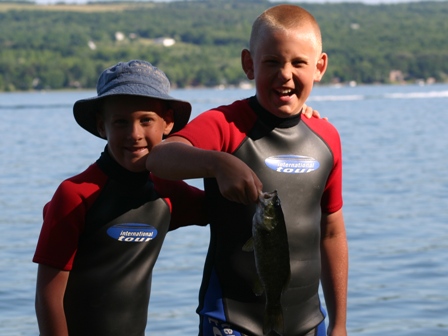 Jacob and Matthew this summer after they caught a nice rock bass (UPDATE as my fisherman friend Bob pointed out, that ain't no rock bass! It is actually a smallmouth. Believe me, though, we caught a ton of rock bass as well. Big red eyes. Seriously). Did you know that a rock bass isn't really a bass, but is actually a sunfish? I didn't till I searched for a good reference page on rock bass. And did you know that if you search for rock bass, you are just as likely to link to Jon Entwistle?

After spending time on and off at Keuka Lake for the past 13 years, this summer I was bound and determined to catch some REAL fish in this lake. I mean something like lake trout or salmon. And apparently, Keuka Lake is known for its lake trout fishing.

After some investigation, we found a charter service that worked out of a marina just up the road from this. My objective in taking a charter was the "teach a man to fish" mentality learn the tackle, rigging, and techniques so that we could do this ourselves in the future. So early one morning, Julie, Jacob, and I headed up the shore to start the charter at around 5am.

The lake was beautiful at this time we were on the water before sunrise and the lighting was spectacular as the sun rose over the east hills. We fished just off bluff point (the very middle of the lake where the Y-branch happens) on the eastern branch. We were situated between the Switz restaurant and a big house on the bluff with columns; the water depth was about 110 feet.

Jacob starts to reel in a lunker lake trout.

The fishing approach was very straightforward we used alewives (aka sawbellies) for bait on treble hooks, with about 12 inches of leader below a swivel. Above the swivel was an egg-shaped sinker. We ran 6 poles simultaneously off the bottom, with two having floats for the sole purpose of keeping the line away from the others.

We had a very productive morning 1 good size smallmouth (which we released) and 5 lake trout. The boys and I cooked up one of the trout that very evening, and I swear the meat was the color, texture, and flavor of a salmon. Very tasty! The three that we cooked up the following evening were the more typical white meat found with trout, but tasted fantastic nonetheless. 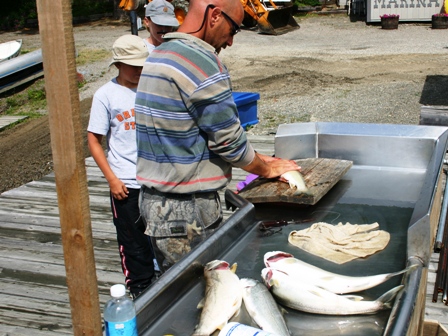 Our guide cleaning the trout after our fishing trip. He kept the fish whole, and we cooked them in foil over a grill with butter, garlic, onions, mushrooms, and other seasonings.

Our next fishing adventure was to prove just as productive, if not nearly as enjoyable. Jacob and I had been toying with the idea of an off-shore fishing trip from Depoe Bay, which is near our new beach home at Salishan. Last weekend (July 31), we were cruising around Lincoln City looking for flooring for the house. As a reward for getting dragged around for half the day, we stopped by the DQ on 101 for some lunch and ice cream. We are standing in line waiting to order when a man walks up and says "aren't you Julie and Chris" or something to that effect. I do a triple-take and realize it is Dr. Jerome Smith, father of one my earliest best friends Bob Smith (yes, the same guy I mentioned earlier that I fished with as a youth). Turns out most of the Smith family is in Lincoln City for the weekend for the wedding of Bob's younger sister Debra. Debra moved to Portland a few years ago, but Bob and his parents live in Indianapolis. Bizarre coincidence...

Anyway, I talked Bob into joining me on a salmon fishing charter the next day. Dockside Charters had room for two people, and on the Sunday morning we learned that the other pair had cancelled (small 4-person charter) so there was room for more. I raced back to Salishan to pick up Jacob! Boy, was he going to regret that a spot opened up...

We were able to get back to the dock around 6:15am for our departure. Low tide was going to be at around 7:30am, and as treacherous as the bar is at Depoe Bay, the skipper was anxious to get out. The Coast Guard was actively patrolling the inlet and disallowed any non-commercial boats from leaving the bay due to rough sees and shallow water at the bar. What did this mean for us? Once we got out on the ocean, we weren't coming back for 3 hours...

Bob reeling in a chinook salmon. Does Jacob look happy? No, Jacob does not look happy.

Here's the problem with the three of us going out on an ocean charter where we can't come back for three hours: we all got seasick. I was fine for the first 90 minutes or so, and took great pity on Bob and Jacob. Bob was at least functional enough at times to reel in fish; I probably caught about 4-5 wild salmon (which had to be released) plus my two limit hatchery coho salmon. By 7:30am we were all in pretty bad shape; Jacob and I lost track of the number of times we each threw up (fortunately all over the side). Jacob was so out of it that he doesn't even remember that I was seasick. 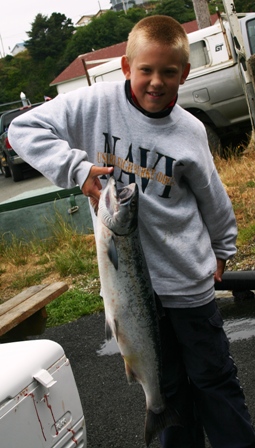 Jacob with a rather sizeable coho salmon.

Despite our misery, we managed to pull in our limit of two hatchery salmon each. We had them cleaned once back on the dock, with a combination of filets and steaks providing enough salmon to last us for several months. 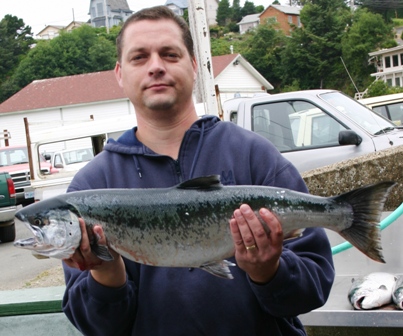 Bob holding up our largest coho.

So, it looks like Jacob and I probably won't be doing any more ocean fishing trips, at least on small boats. Now we are actively searching for a good coastal river or bay guide service only flat water!