About a week ago, Jacob and I joined Ken and Brandon at the Rude household for a game of Runebound, the fantasy boardgame from Fantasy Flight Games. This game is right up our alley great theme, easy to learn, some dice rolling, and plenty of action. 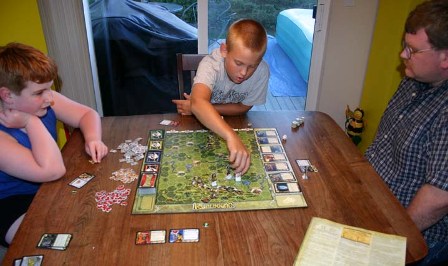 Each player takes the role of one of twelve heros, either randomly or by mutually agreed choice, and the objective is to complete a quest. In the case of the scenario included with the game, this means defeating the evil lord Margath or collecting three dragon runes (usually by defeating three dragons).

Gameplay is very straightforward. On a player's turn, he rolls movement dice (5 if in a town, 4 otherwise) to determine the allowable terrain through which his hero may pass this turn. This creates some limitations and often dictates what a player will try and do. Most of the game is spent going to towns to heal or hire allies or purchase goods, or attempting to defeat encounters (usually monsters). Encounters are color-coded depending on difficulty, and defeating an encounter gives the hero experience and some additional reward (gold, an item, or perhaps an ability to use later). 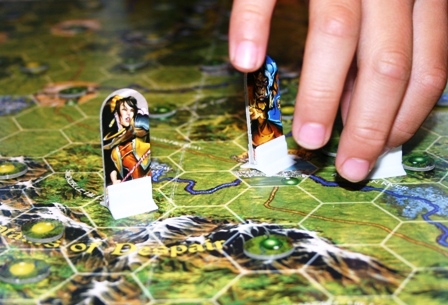 Closeup of the hero counters. You can also see some of the encounter chits (green, yellow in this case).

We played the basic rules and found the game very enjoyable, if a bit too long with too much downtime. Four is definitely the most I would play with, 2 or 3 would be even better. We found ourselves multi-tasking a bit, having the next player roll and start his move while the previous player finished his turn.

Combat was very confusing to learn at first it isn't always clear what choices you have and what is mandatory, especially when you are joined by allies in battle. We worked our way through it though, and I'm fairly sure we got things mostly right based on some reasearch I did after playing. Make sure you read the FAQ!

There's plenty of luck in this game, and it can be very frustrating! Jacob had a very difficult time at first and fell behind quickly mostly due to poor rolls in his first few battles. Goes with the territory in a game like this. We stopped before the game finished after about 3 hours of play, and gave the Ken the victory as he was the only one who had collected a dragon rune.

There is a planned expansion coming out soon which should keep things interesting. Jacob, Matthew, and I plan on playing this weekend, and we will certainly try out the advanced rules this time to raise the challenge bar and complexity a bit.