Last week Julie and I, along with her mother (Jan) and stepfather (David), closed on a home in Salishan, near Lincoln City, OR. This was originally an idea Jan had they'd been thinking about a vacation property for some time, and after deciding against building a place in Utah not far from their home in Las Vegas, they decided on the Oregon coast. It probably helped that we confirmed with them how much we love this area and how we have no plans to leave...

Given the proximity of the home to ours, we thought it would make sense to join in the investment and split things evenly, and as of last week the process is complete!

First, a bit about the general location. Salishan is a peninsula that forms around Siletz Bay, creating an amazing blend of rugged Oregon coast, a tidal bay, and estuarial wetlands. There are some amazing homes in Salishan, and while we certainly bought in at the low end, we couldn't be happier with the location. The home is on the bay side in a pine forest, so we have very little direct wind and sea spray exposure. This should ease maintenance on the home and makes it very comfortable during all hours. The beach is a short 2 minute walk away; though beaches in Oregon are public, given that the peninsula is fairly difficult to reach by the general public we have found the beaches to be very quiet. 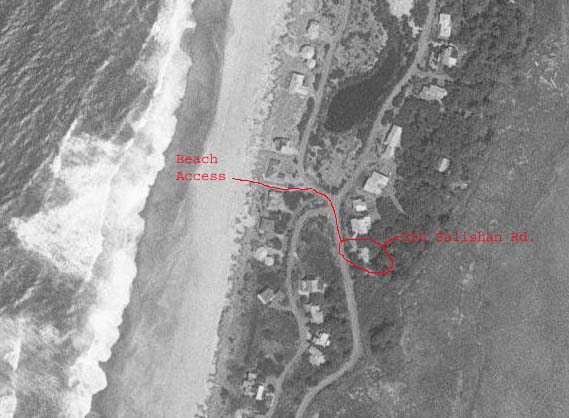 A satellite view (courtesy of TerraServer USA) from around 2002, showing our home and the convenient beach access available. The bay is to the right of the home.

The house certainly needs some work, but it has tons of character and a very interesting floorplan. There are five levels to the home, arranged mostly in split-level fashion, with the ground floor being quite a ways up from the driveway and carport. The main floor is close to the treetops of fairly old growth pine forest, creating an almost treehouse effect. The deck on the main floor is most impressive, offering panoramic views of the bay and some fabulous bird watching early in the morning. There also an elevator (!), currently not functional but on our list to repair. This is mostly to transport groceries and other goods from the carport to the main level, but it is designed to carry a single person. 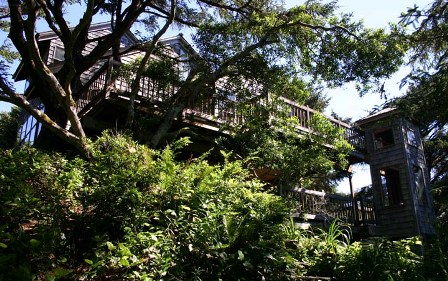 View of the home from the stairs leading up the driveway. You can see the main deck above, the deck for the entryway below, and the elevator to the far right.

This place will be a money sink for a while as we replace flooring throughout most of the house, do repairs, and furnish the place. It is only about a 90 minute drive from our house, making it an easy trip for weekend visits. Given the horrible traffic on most Sunday afternoons (mostly due to the casinos between our house and Lincoln City), we will likely stay through Monday early morning many days.