This will be my last entry on the Sun River gaming extravaganza. Sunday was a shortened day George and I left together around 3:30pm to get home in time to see our kids to bed. 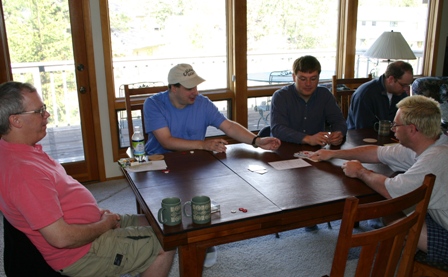 We started the day with a replay of KC's Tres Amigos, a clever little trick taking game. This was enjoyable for me as we tweaked the rules as we went along, trying a few variants including the ability to go 'nill'. This turned out to be a bit easier than anyone initially thought, so the points were probably imbalanced. Chuck one this match in a come-from-behind manner by, you guessed it, going nill in his last hand. 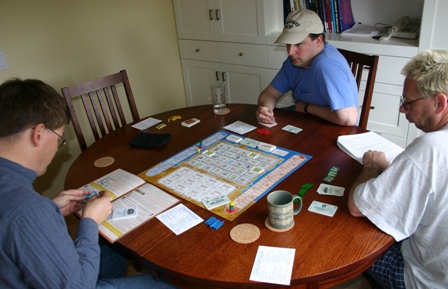 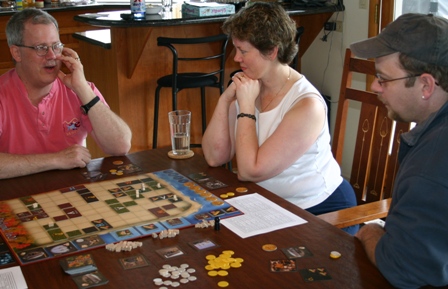 KC and Rita were very interested in a game of New England. This was one of my favorite new releases last year so I eagerly joined in as did Doug. This game, as are most I play, was very close. I believe KC won, scoring the winning points on his final play. We exhaused the tiles and cards simulataneously. 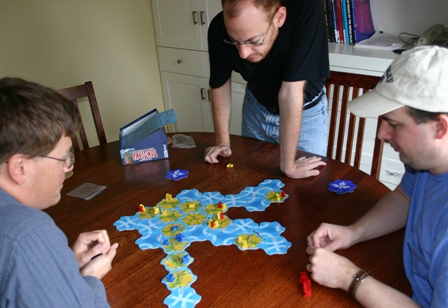 Tongiaki comes out. I don't get to play this game nearly enough. 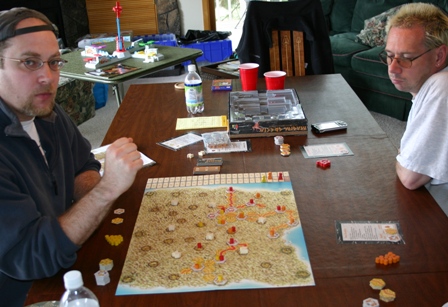 I asked to play Magna Grecia this is a game I picked up on the cheap a few weeks ago so wanted to learn from an experienced player (Doug in this case). This game reminded me of Java tons of choice and opportunities for analysis paralysis. A bit too abstract for my taste, but it was enjoyable and I'll play it again. It took a while to grasp all of the connectivity and scoring rules. 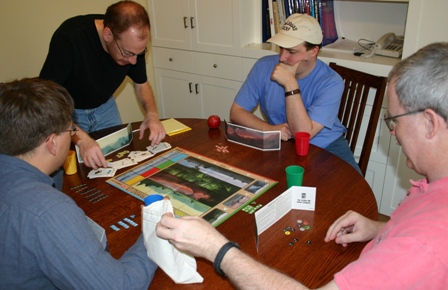 This game of Tyranno Ex took quite a long time to play. 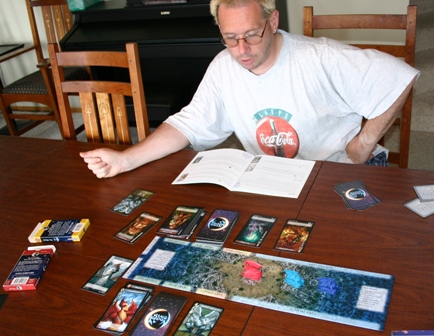 Mike and I played Blue Moon again. This is a non-collectable two-player card game with big cards and some fantastic artwork. The game, however, I could take or leave. Most games Mike and I play (we've played 4 now I think) end up in a draw or an unsatisfying victory due to deck exhaustion. I would rather played a pre-constructed Magic or Game of Thrones game. 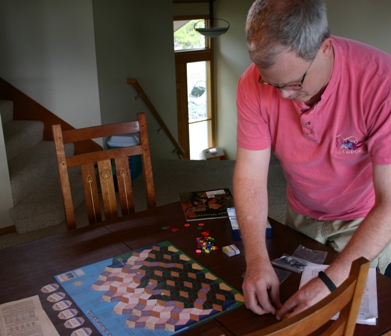 As George and I left, KC was setting up for a game of Base Camp Delta for the diehards that stayed through Tuesday.

I want to extend my thanks again to Doug for offering up his house to our group, and to the rest of the group for welcoming me into their fold. These guys (and Rita!) are a fantastic group to hang out with and I'm blessed to be a part of it.