Let's move on to day 2, Saturday, at Sun River. This was my heaviest day of gaming, both in terms of the number of games played and the style of games. I'll provide a bit more commentary this time on a few of the games played, including a Settlers variant, Wallenstein, and Bus. 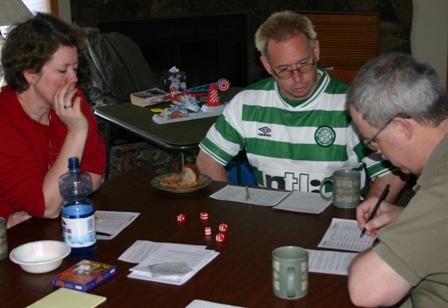 I woke up relatively early and went for a run around Sun River. When I came back around 8:45, I found Mike, KC, and Rita playing Solo Dice. I saw this played at the two-player tourney at GameStorm and need to try it at some point. 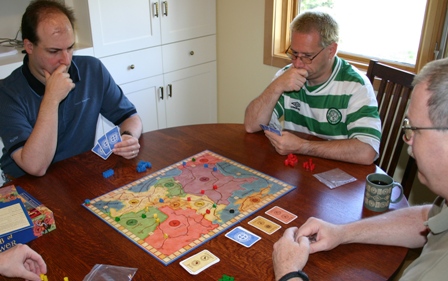 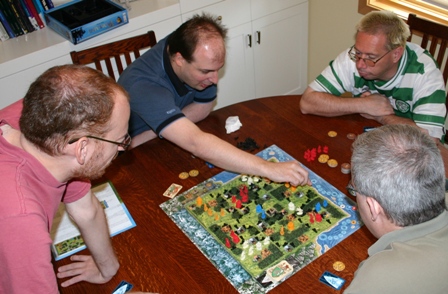 Dave, Chuck, Mike, and KC battle it out in Domaine, one of my favorites. Hard to be in two places at once, but I was sorry I missed out on this game. I was too wrapped up in my highlight game of the weekend however.

Doug was eager to try out one of the Settlers variants from Das Buch, a collection of 15 expansion scenarios. He chose the Great Race, a variant where the only objective is to build a city in one of 8 possible locations to claim a stake of gold at the end of a chain of islands. No victory points, no longest road, just get to that freakin' gold mine as fast as you possibly can. 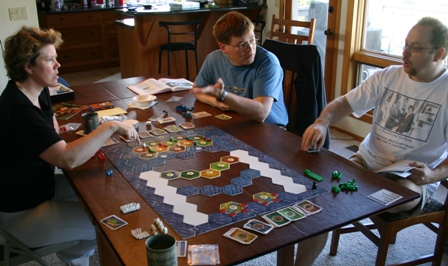 Rita, George, Doug, and I start the Great Race. All players start at the edge (top-left) of the board and try and build a city at the other end (bottom right) on one of the red chit spaces.

The game starts in traditional Settlers fashion on one end of the game setup. Quickly players start to explore with their ships to travel to what could be an island or more open sea there's an exploration element to this gama ala Goldland or Entdecker. There's very little blocking allowed in this game, as players can build roads alongside each other and may rent ports from other players (by giving up a random resource card) to launch ships. 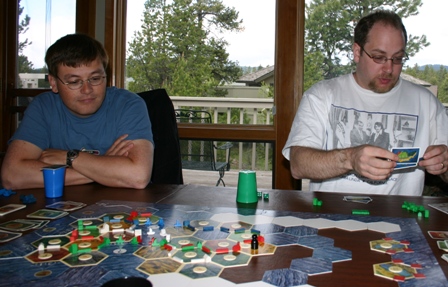 Part-way through the race. Doug is green and a bit behind at this point, though not as far behind as I am. Rita and George are blazing the trails.

One disadvantage of getting too far ahead too early is that you must commit to a path that could lead you to less productive land spaces (they are drawn randomly along with the die roll marker). I was a bit slow out of the gate but was able to avoid the less useful spots that George uncovered.

What made this game so much fun was how close it got near the end and the raw tension that created. 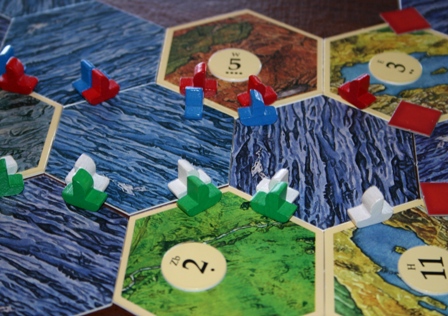 Near the end I reached the gold just before Doug, and you can see that Rita is barely ahead of George on the other island.

We all reached the final islands near simultaneously, but Rita's lack of ore production cost her dearly as she either needed to trade with unwilling opponents or do expensive trades with the bank (I don't think she even had a 3:1 port). I didn't have any settlements on 6 hexes, and a string of bad rolls (for me) starved me of resources for 4-5 consecutive turns. Doug turned out to be the victor he did a great job of getting some cities built early on key resource hexes and this proved to be the difference. Playing this variant convinced me to pick up this collection of expansions (good price at Boards & Bits!). This was definitely the highlight game of the weekend for me. 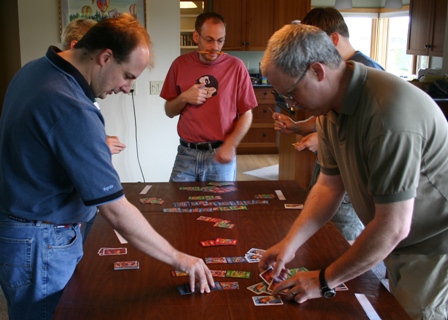 Dave ran a Brawl tournament next, which I found to be quite fun but didn't float everyone's boat. This is a real-time, simulataneous play card game. I enjoyed playing this much more than Frenzy, a similar, newer, but inferior card game. 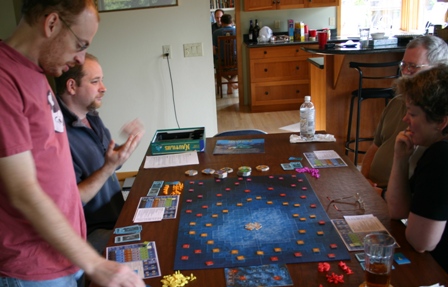 Dave, Doug, KC, and Rita start a game of Nautilus. I've seen this come out a few times but have never played it. Seems long but has some pretty parts.

I offered up Wallenstein as the next option, and got thumbs up from Chuck, Mike, and George. This is one of my favorites, and I am usually in a few online games at Mikael's great website. Face-to-face play means you get to use the cool tower... 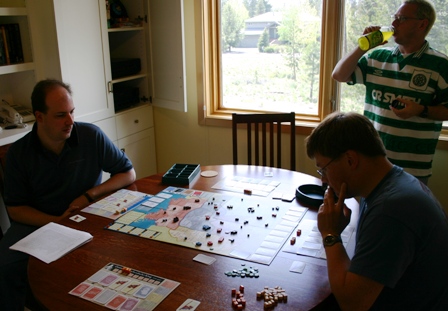 Sorry for the poor lighting on this one.

For those that don't know Wallenstein, think of a cross between Risk, Diplomacy, and light traditional wargames. The setting is central Europe in the 1600s during the 30 years war, and players play mercenary commanders in charge of a few regions/states within the German region. Each turn players plot their fixed set of moves (reinforce, move, take gold, take grain, build buildings) in each of their regions under control. There's a bit of diplomacy involved, a lot of strategy, and plenty of fighting.

Battles are resolved via the Wallenstein tower, an innovative device that has hidden shelves that capture some of the little wooden blocks as they cascade from the top down to a tray. So if I have 10 soldiers and fight a province with 5, we take all of the soldiers, plus any leftover in the tray, and drop them into the power. If more of mine come out than his, then I win the battle and any of my leftovers go to the conquered province.

I had a strong start at this game, taking control of the north and getting some solid buffer zones. I had a decent position in the southwest as well, and this lead to a decent lead at the end of the first year (25 points, with second place at 19). An event at the end of the first year, though, foretold how the rest of the game would go for me. I failed to harvest enough grain to survive the winter, and I lost my most valuable northern province to a farmer rebellion, costing me five points. I needed these points because of my early rush tactics, and new I would be the target during year two. If I managed to build a big enough lead, however, my buffer zone in the north would allow me to maintain my lead and hopefully lead to victory.

I certainly became the target in year two, and as luck would have it lost my most valuable province again to a freakin' rebellion, losing another 5 points in the process. I finished dead last with Mike winning the game. 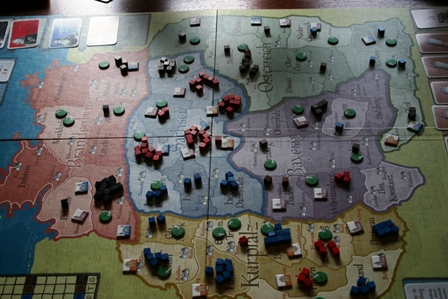 Final positions. I was black, and you can see my anemic position in the north (three provinces held). Those two revolt markers are were I lost to a rebellion, even with 4 soldiers in the province. 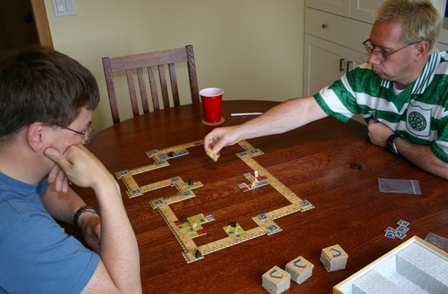 George and Mike play the two-player Carcassonne: the Castle. 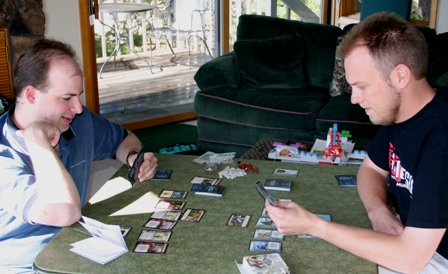 Hey, a picture with me in it! Chuck and I had a rematch of our Game of Thrones CCG battle earlier this year. This is the best CCG I've played since 7th Sea; I need to teach it to Jacob. And if you are a fan of the books, this is the best place to get solid artwork. 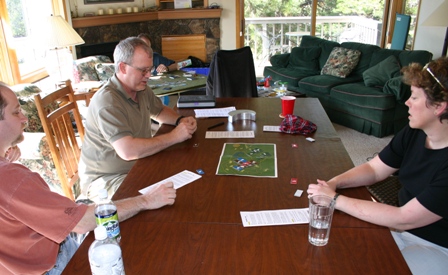 KC, Rita, and Doug play KC's prototype NW Trek. This game was played with a rectangular tile set instead of the Cairo-style tiles. 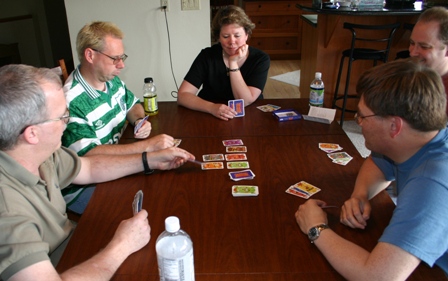 KC, Mike, Rita, Chuck, and George play Zirkus Flohcati. I played this light cardgame down in Dallas last year, but haven't since. 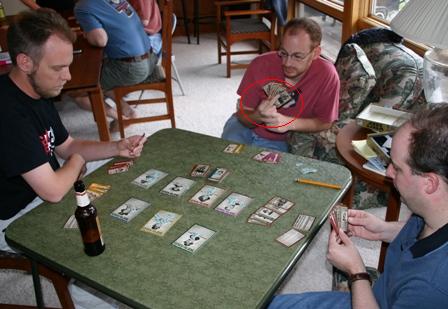 I played Wyatt Earp, one of my favorite rummy-style games, with Dave and Chuck. I got smoked. This usually happens when I play Dave. 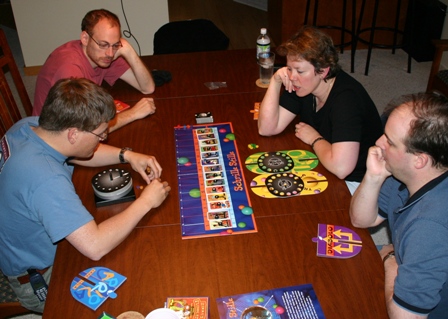 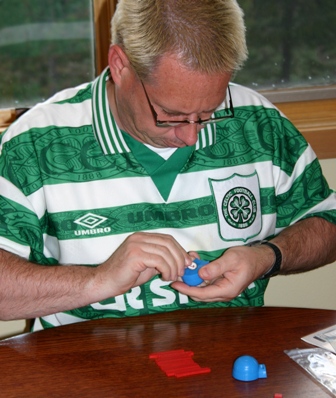 Mike helps assemble KC's new Igloo Pop game. I guess you fill up these igloos with a certain number of beads then label the igloo. Looked to be a pretty tedious job.

My last big game for the day was a try at Bus, the great transportation game from Splotter. We played with a variant (KC made up a special board) that provides more options for choosing player turn. This makes player seating position less of an issue than in the original game, and I like this variant much better. 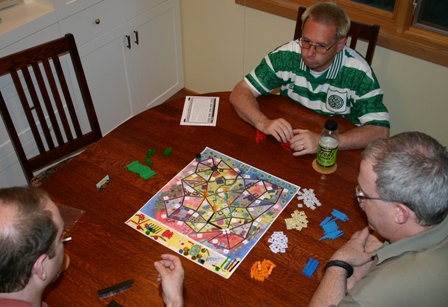 Doug didn't realize he was getting into a thinking game he was hoping for something a bit lighter. He humored us though and hung in there until the end. I played a decent game, holding the lead for the majority. Towards the end, however, I petered out as I was unable to get and available passengers. KC played a great game and pulled ahead by one at the end. 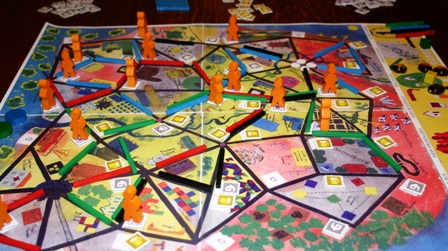 The final board configuration in Bus. Note the street markers used at the top right to track player order; this is the variant. 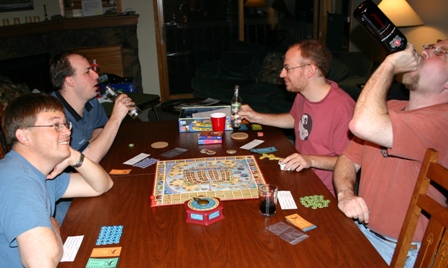 Things got a bit rowdy during this playing of Merchants of Amsterdam. 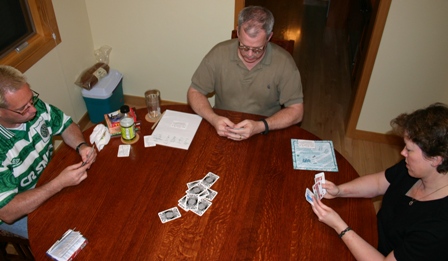 We closed the evening with a game of Mu, a trick taking card game that I'm eager to play again. This is not a light card game the bidding and trump rules are complex, and the scoring even moreso. Just my kind of game!