Twice a year the RipCity Gamers group journeys to Sun River for 3-5 days of gaming goodness. Doug and his family are kind enough to offer up their vacation home to a bunch of gaming geeks this tradition started back in 1999 and has continued ever since with gatherings (hah!) in May and November. I missed the event last November, but was eager to accept the invitation this time around. George and I drove up Friday afternoon, arriving around 4pm. Doug, Dave, and Mike had arrvied about two hours earlier and we got started pretty quickly.

Rather than my normal format for session reports, I'm going to make this one more photo oriented and post comments on the games I played with the pics. I'll make some final commentary when I do my entry for today's (Sunday's) gaming. 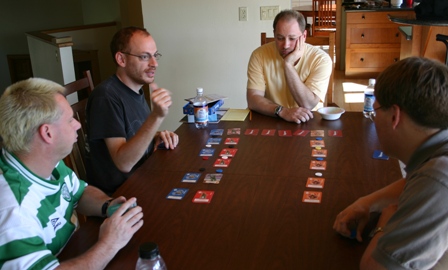 The five of us (clockwise from left: Mike, Dave, Doug, George) started things off with a game of Titan: the Arena. I somehow managed to win this one, though I'm not quite sure how. I think this was a case of nobody realizing how good my bets were until the 3rd round or so. 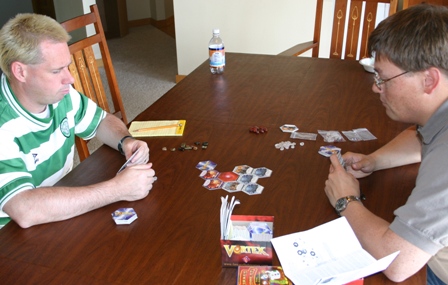 Mike and George dueling at Vortex. I haven't played this one yet, though George spent some time explaining it to me on the drive back today. I'm definitely interested in giving it a try. 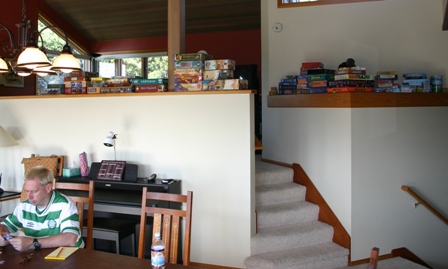 Check out the shelf-space for a sampling of the games folks brought for the weekend. This was before KC and Rita showed up, so there was a pretty sizable collection there. Less than in prior years I'm told though. 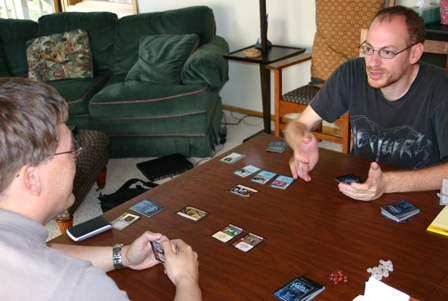 George and Dave playing A Game of Thrones CCG, I believe with the Ice & Fire premium starter decks. More on this later I got a chance to play on Saturday. 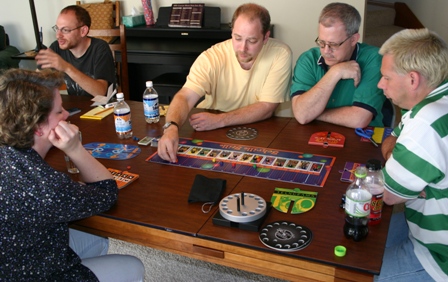 KC and Rita arrived and while George and Dave played AGOT: CCG, the rest of us played my favorite party game: Schrille Stille. I can't remember who won this game I think it was KC or I. Truth is, I don't really care this game is always a blast and a great way to start an evening of gaming. 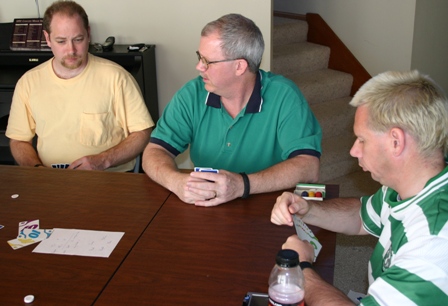 Next, KC introduced us to his latest prototype, Tres Amigos. This is a light trick-taking card game, reminiscent of Euchre but with a few nice twists. The game needs some tweaking still, but it was certainly fun. The theme is lifted from the classic comedy. 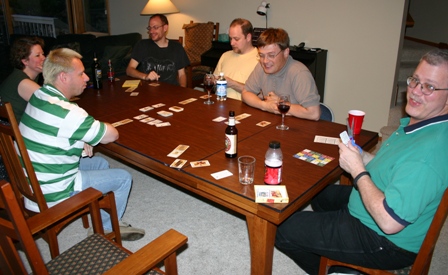 What better game is there for seven people than Bang!? I can't think of any... though it can be brutal when someone leaves the game early. Like when the deputy (me) takes out the renegade (KC) before he takes his first action, while sitting in jail. That's why you see KC cutting out pieces for one of his prototypes. Fortunately we were playing the High Noon expansion so he was able to come back to life for an encore. This time the sheriff (Mike) and his deputies (Rita and I) were victorious. 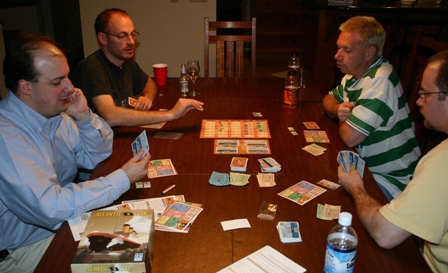 After Bang! we started some more serious gaming. This crowd played Atlantic Star, the remake of Show Manager. Which was a remake of Premiere. Not that this means anything to me as I've played none of them. 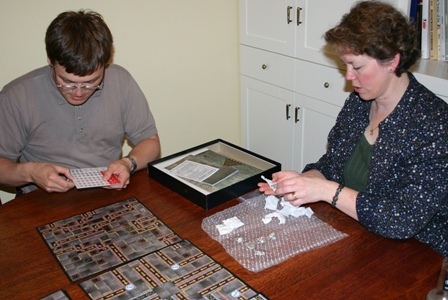 KC offered to teach us all Robo Rally, a game I recently acquired from KC. 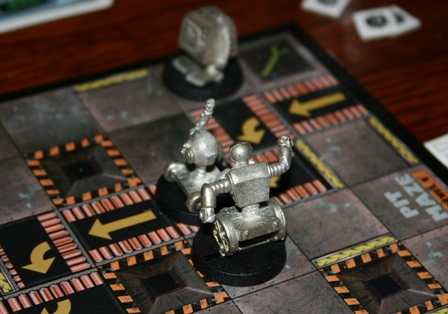 Robo Rally is a programming game where players attempt to guide their robot through a series of checkpoints while avoiding hazards on the factory floor and while distrupting the progress of the other robots. This is a great game that I look forward to playing again, but it seems like it could be quite long. We only played to one checkpoint and the game lasted almost two hours. Much of this was setup and rules explanation though. 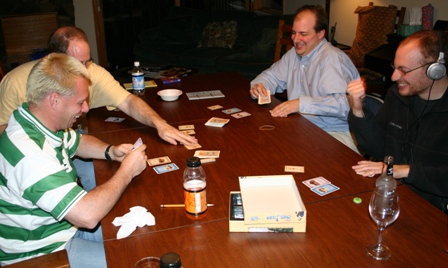 Mike, Doug, Chuck, and Dave enjoy a game of San Juan while we finish our Robo Rally session. I believe Dave won this game. Side note: a few of us brought our iPods, so there was a near continuous stream of music wafting through the house. At this time in the evening, my iPod was in play. Notice the headphones on Dave I think they may have come out when my random shuffle brought out the "Pina Colada" song. 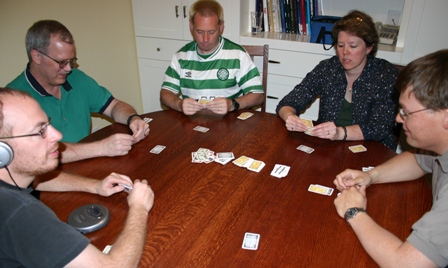 My last game of the evening was Foppen, one of my favorite trick taking games. I managed to get through the game in the black for the duration; everyone else was negative for most or even all. Good hands I suppose.

Update: Oops as George pointed out, this is actually Attribute here. We also played Foppen, but that's not what I'm showing here. 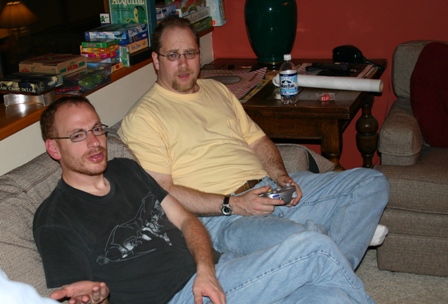 Perhaps my photo taking has gone a bit far, as Dave and Doug are clearly annoyed with this shot of them playing the GameCube. 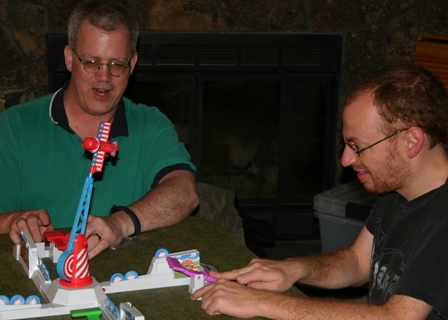 KC and Dave finish out the evening with a serious game of Loopin' Louie.