Not much gaming happening lately. Busy travel schedule again (though things look to be quieter in May/June), and my gaming date in Las Vegas feel through last week. I did manage to get in a playing of San Juan at work last week with a couple of co-workers, and I taught KC's prototype Northwest Trek to the family Friday evening.

Two co-workers, Jason and Arron, took me up on an offer to play San Juan over lunch at the campus center at Corillian. Jason had played Puerto Rico before so was very familiar with the role-choosing mechanic; Arron hadn't played PR but had at least read the rules, so within 5 minutes or so we were underway.

I experimented with a lot of producing/trading in this game, certainly to my detriment. Unlike PR, in San Juan everyone can sell any goods, so it often isn't as advantageous to choose the Trader role. Arron stuck to prospector most of the time and did a nice job getting violet buildings out, but his lack of experience with the card combos hurt him as he didn't get a good multiplier. Jason picked up the game very quickly, going nuts with lots of production buildings then laying out a Guild Hall, which gave him (I think) a total of 14 bonus points. He won the game running away, I was a distant last place.

The boys asked me to teach them one of KC's new games, so I pulled out Northwest Trek, a fairly light and simple geometric tile-laying game. 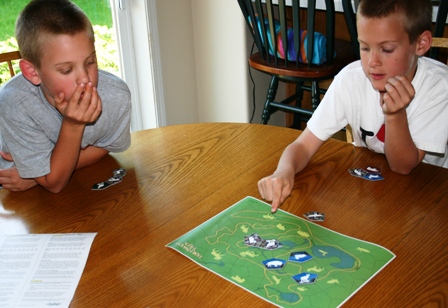 Jacob and Matthew starting a game of Northwest Trek with Julie and me. We played with open tile hands for most of the game so that I could help everyone.

As I have mentioned before, Northwest Trek uses Cairo tesselation a cool geometric trick which creates some challenges in placement because the tiles are vertically asymetric. We are working on some different board/piece decorations to make it easier to orient the pieces for placement. 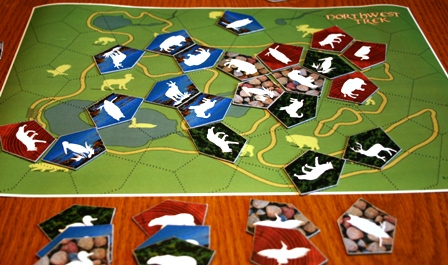 No surprise Matthew managed to beat all of us with a strong showing four sets of animal photographs with 6, 4, 4, and 3 in the sets.

Would you be interested in downloadable versions of these games? If so, leave a comment here. KC and I are gauging interest in making DTP-style versions of 1 or 2 of his games available.