This report is almost a week late in coming, but better late than never. Spent
last week in North Carolina and Colorado, and I head to Vegas this week for a
conference where I'll be speaking.

Last Sunday a few folks came over for some casual gaming. This wasn't a
scheduled event so I was surprised at the strong turnout. Peter, Ken, Brandon,
Mike, Kevin, KC, Rita, and Jenna all joined us. Brandon, Jacob, Matthew, and
Jenna spent most of the time playing anything but boardgames.

Kevin and Ken arrived first (Brandon went upstairs to play with the boys), so
we quickly broke out San Juan, the card game based on the innovative boardgame
Puerto Rico. I had played with Jacob
once before so had a decent handle on the rules; in any case, this is a very
easy game to explain and learn.

I got off to a strong start, getting a silver mine early and a few
production/trading enhancement buildings. It wasn't a very close game - I got
to 12 buildings first and had a sizable advantage. I'll attribute my victory
to the fact that Ken and Kevin were just learning. 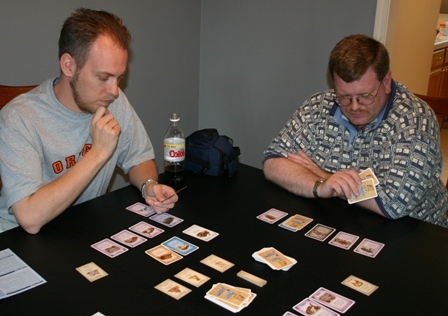 This is a quick, light, but fun game that I look forward to playing a lot in
the future. Looks like I even convinced a couple of co-workers to join me for
a game over lunch next week!

While waiting for our game of San Juan to finish, KC, Rita, and Peter played a
quick game of Pizzza, KC's light family game prototype. Players are in pizza
school and try to make the best pizzas. This is a tile laying game with a bit
of hidden objectives thrown in, and is a blast to play. 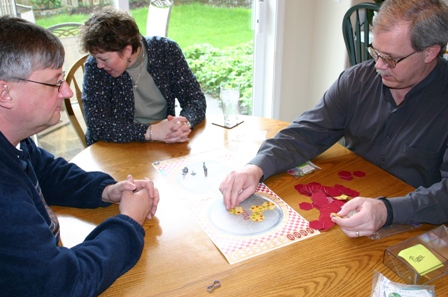 Schrille Stille plays great with 6, so that came out next. This is not a
game of deep strategy and if you can't handle a bit of chaos, say away from
this game. Boy, is this game fun! Even after the amusement of the voting
mechanism wears off, there is some serious tension as the game draws to an
end. We had lead changes on all four of the final scoring rounds, with players
bouncing from last to first and back again over the course of two turns. I
think Kevin came out on top this time. 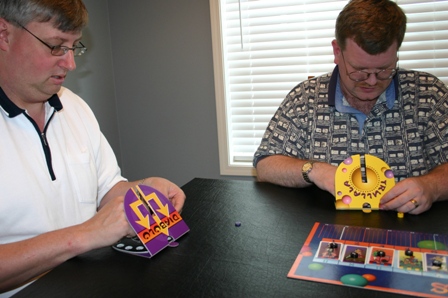 This game truly is a party game, and would be welcome with most casual or even
non-gamers in my opinion.

Several folks wanted to play Ticket to Ride, so we broke that one out. Mike
Deans showed up about the same time, and we had 6 people and had to split
things up a bit (Peter had to go). Kevin, Ken, Rita, and KC played Ticket to
Ride while Mike and I decided to learn and try Blue Moon. 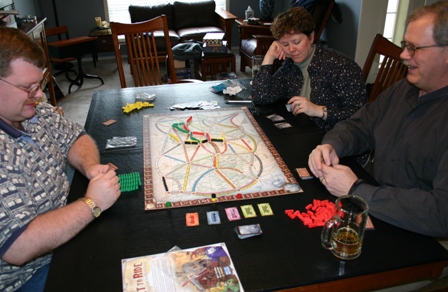 I think everyone was feeling good about this game. I certainly look forward to
playing it again.

Mike and I decided to play Blue Moon out of the box. The rules are
straightforward, and if you are familiar with combat-oriented CCGs you will
pick up this game quickly. Blue Moon is not a collectable card game though -
it has a base set with expansions (and more due this year), but there's no
notion of rarity, booster packs, etc.

Each player represents a faction at war with each other. On a turn, a player
will always play a character to duel against the opponent's character. Each
character has a specified strength in earth and fire, so when you lay down a
character you must declare the element in which the character will fight.

The opponent must either respond in kind with a character at least as strong
as the opponent's character, or retreat. When a player retreats, the other
player wins a dragon to his side. Three dragons start out the game in the
center (neutral) space. If a player can win all of the dragons plus one to his
side, he automatically wins the game. Dragons only live on one side or the
either, so when you win a dragon and the opponent already has one or more on
his side, one of those dragons just moves back to the neutral space.

There are other optional cards that can be played with the characters:
leadership cards are use-once in nature and give a benefit usually unrelated
to the character (like allowing the player to draw more cards). Booster and
support cards usually improve the character currently played or limit the
opponent's actions in some way.

If a player runs out of cards or cannot play a character from his hand when he
must, then he automatically loses the hand. This is the way all of our hands
ended, so clearly card management is a key part of the game.

This is a fun game that I hope to play some more. I'm not sure if it is
significantly more compelling than playing, say, the latest pre-constructed
starter decks for Magic: the Gathering, but there are some nice differences.
First, the artwork is extremely nice. Second, the cards are much larger
(probably twice as big in area) giving it a different feel. The gameplay is
also a bit simpler in that there seem to be fewer timing issues.

While waiting for the Blue Moon game to finish, the rest of the crowd played a
shortened game of Liar's Dice. 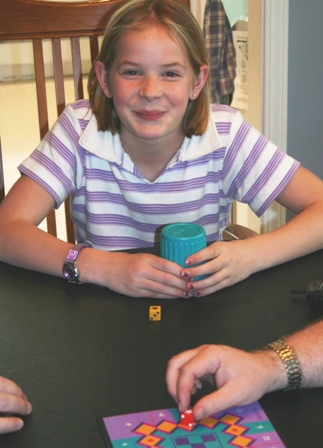 I think Jenna was down to her last die at this point, but she still seems
happy!

I can't remember how this one turned out, but I do know that everyone enjoyed
the game. I haven't played it so look forward to giving this one a try at some
point. 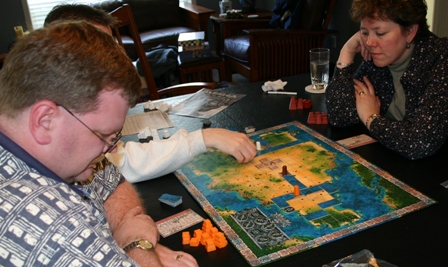 The last game of the day for me was KC's latest prototype, Base Camp Delta.
The theme is pretty cool here - mountain climbers trying to reach the summit
of Mt Everest and the other peaks surrounding it in the Himalayas. 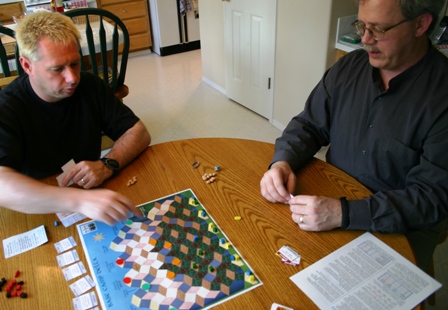 This is a racing game but with a few twists. Teamwork is key here, and in the
spirit of cooperation of climbing teams, even your opponents climbers will
help yours. So when climbing, it helps to have others above you and with you
to facilitate those tricky stretches. 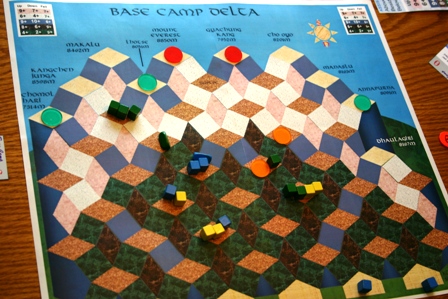 Close-up of the board in Base Camp Delta. Note the tokens representing hidden
values for the different peaks.

There's a certain press your luck element to this game - climbs are attempted
with dice rolls (d10) and checked against a difficulty scale based on the
terrain, plus any bonuses from helping hands and cards played. Each climber
can make two climbs per turn (a player has 5 climbers), but as soon as a
single climber fails, the turn is over. If you manage to finish a turn without
a failed climb, you get to draw an extra card.

Those that dislike dice rolling games may cringe when they see a game like
this. If you like Formula De or other racing games, but want to include some
other mechanics such as surprise objectives and resource management, then
you'll probably enjoy this game.