Jacob and I had some spare time this afternoon while Julie and Matthew went shopping for a birthday present. Looking into the game closet for a two-player game, I pulled out Senjutsu, a two- player game we purchased at GenCon Indy last summer. This game didn't receive broad distribution, but I have seen it locally at Rainy Day Games. I strongly recommend this game if you are a fan of chess or stratego - you can order it online directly from the manufacturer. 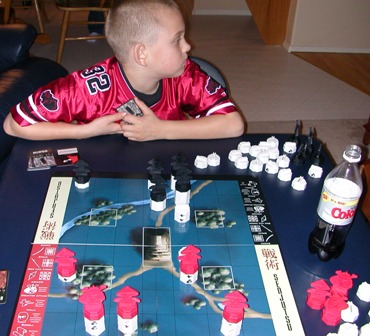 Each player has 10 warriors, 3 of which are officers. Warriors can move orthogonally while officers can also move diagonally - officers also pay a better reward when eliminated. At the start of the game, players arm each of their warriors with three weapons, resulting in a highly customizable setup (learn more at the Senjutsu home page). Similar to Stratego, one of these weapons is a scroll that, if captured, results in an immediate victory for the capturing player. There are three ranged weapons - swords, spears, and bows, each with their own abilities (bows are by far the most powerful but are also scarce). You can also equip your warriors with armor (absorbs an attack), a counter-attack (used to win hand-to-hand combats), and a special Ninja that, when abandoned, acts as a bomb and will destroy a capturing warrior. The arms are stackable blocks that are only visible to the owning player.

When a warrior is eliminated, he leaves behind all of his arms - either player may then recover these by moving a warrior to that space. A warrior can only carry four arms at a time, though there are no stacking limits.

Jacob and I had a fun match. We both started defensively, firing long-range bow shots to try and pick off enemy units, though we had both put adequate armor on our front lines. As we moved out to confront each other, warriors started to be eliminated - Jacob was ahead 1 or 2 warriors at one point. I was able to penetrate deeply into his lines though, killing off a warrior and capturing his stack, then using that stack to eliminate two more close by and withstand a counter-attack. This was the turning point in the game, as it was only a short while until I captured the scroll.

This is a very fun, quick two-player game that I highly recommend. The parts are very high quality and it plays in less than an hour (15-20 minutes of that is setup time).