We had a fun weekend of gaming. Julie and a friend made a date to go night skiing at Skibowl Friday night, so it was just the boys and me for some gaming fun. Saturday evening, Ken and Brandon came over, with Brandon spending the night with Jacob and Matthew. Sunday, while Jacob was at a baseball clinic, Matthew and I played a few two- player games.

My wonderful mother was kind enough to give me a $50 gift certificate at Amazon. I have a huge backlog of books to read, so I immediately went to the Toys R Us section to see if there were any good deals on games. I strongly encourage folks to periodically check out the Toys Outlet section - there are often very good deals to be found. I recently mentioned the deal I found on Roller Coaster Tycoon, but I was also able to purchase a Crokinole board ($9.99 plus shipping) and the Attack! boardgame ($19.99).

OK, so why did I purchase a $10 Crokinole board? Sure, it is no substitute for a "real" solid wood board, but all we currently had was a beat up square Carom board. I figured this would be a great, low-risk way to see if the family enjoys the game before forking over $200+ for a good board.

This board is nice! Sure, it isn't nearly as friction-free as a good board, but it works great for the kids and it has come out every day this weekend. I taught the boys how to play Friday evening and we had some fun 3-player matches. I recommend this board highly if you want to give this dexterity game a try.

I borrowed this game from a co-worker, so Jacob and Matthew wanted to give it a try before returning it. This is a puzzle game with very little interaction - you can see what the puzzles are like at the online site. I enjoy the game, but would be just as happy playing solo as I would with a group. I'm glad a tried this before buying it, since I doubt it would come out much at our house. We stopped after 5 rounds (the pizza showed up!).

After having some pizza, Jacob, Matthew and I dove into a game of Attack!, a pseudo-WWII game. I place this squarely between Risk and Axis and Allies in terms of complexity. 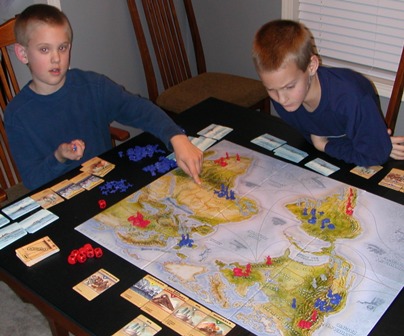 One thing I like about this game (vs. Risk) is that it can be slower to develop, since the players (at least in the three-player game) can start to build up some buffer. There are interesting choices every turn (moving, building, deploying a navy) and it was very easy for the kids to learn. Unfortunately we didn't get a chance to finish this game, but I think it will come back out soon.

On Saturday night when Ken and Brandon joined us around 4pm, we brought out Crokinole first. 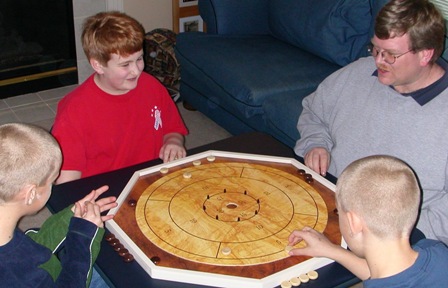 Ken and Brandon get their first taste of Crokinole. Ken and Matthew defeated the team of Brandon and Jacob.

This was followed by a no-limit hold'em tournament that Ken won (the tourney finished with me heads up against Ken but with over a 4:1 chip lead, so I conceded).

The kids went upstairs for some three-player computer action (mostly Age of Mythology, but a bit of Call of Duty as well), so Ken and I took advantage of the quiet to play a heavier two-player wargame called Liberty. This is also a Columbia Games block game, and the more I play in this system the more I like it.

Liberty is a wide-scale American revolutionary war game, where one player plays the part of the British (and American Indians) and the other plays the Americans (and friendly French). I seem to recall that the Americans won this war, and the game may be tilted to produce this outcome as well. 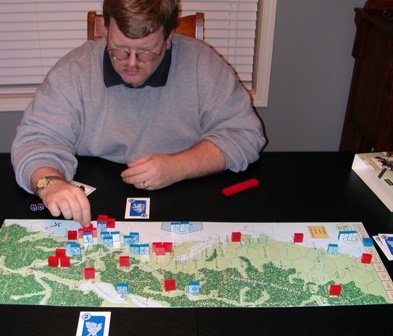 This game is rough going for the British (similar to the position the Scots have in Hammer of the Scots) - they need to capture a good part of the eastern seaboard to win, and it can be extremely difficult to eliminate the opponent given the flexible retreat rules. My strategy of running away from most of the fights unless I had a clear advantage worked well, and I was gradually able to eat away at Ken's cities, nearly getting a decisive victory myself. It became clear though (after 4+ hours of playing, but this was a learning game) that the game would most likely end in an American victory so we stopped early. We both enjoyed it very much though and look forward to another play where we switch sides.

Matthew and I had a few hours together alone on Sunday, so we tried a two- player game of Crokinole to 200. Matthew is improving rapidly, but I managed to beat him by about 50 points in this game.

Around New Years I picked up two starter decks for the Mirrodin Expansion, a cool set of cards centered around artifacts. Using pre-constructed starter decks is a great way to continue to enjoy this wonderful game system without shelling out $100s to build competitive decks. We played two hands, with the black-red deck winning both times (we traded decks between games. 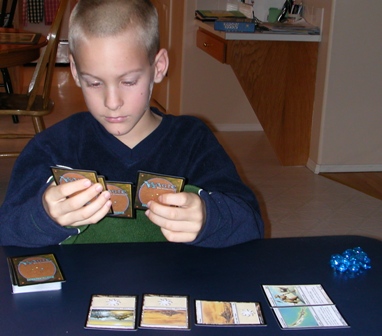 This has been sitting on my shelf for quite a while without a play, so we broke it out to see how it compares to the original. This is a fun expansion (actually an entirely new game) that I highly recommend. The scoring is much simpler and the artwork is beautiful. Matthew claims that he likes this better than the original Carcassonne. 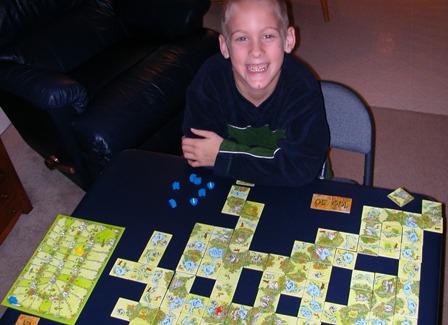 Matthew should be happy - he beat me by about 30 points in our first play of Hunters and Gatherers.