Our new friend Kevin McKenzie was still in town on business (we gamed with him last week), so we invited a few folks over for some gaming at our home on Wednesday night. Attendees were Ken and Brandon Rude, Mike Deans, Kevin Graham, KC Humphrey, and Kevin McKenzie.

KevinM, Julie, and I played this last week, and Kevin was eager to give it another try. I was of a similar mind, but Bus sounded even more interesting to me so I passed and Mike Deans joined in. 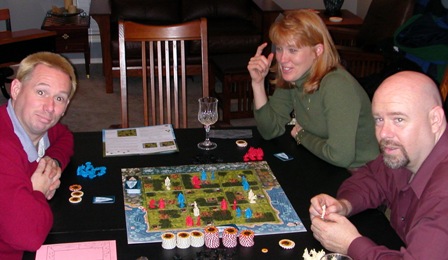 I don't have a lot of detail on how the game went, but it sounded like a struggle between Kevin and Julie. Julie discounted her chances as the game drew to a close, but apparently a mine monopoly belonging to Julie that they had forgotten to score turned out to be the clincher - Julie won the game. 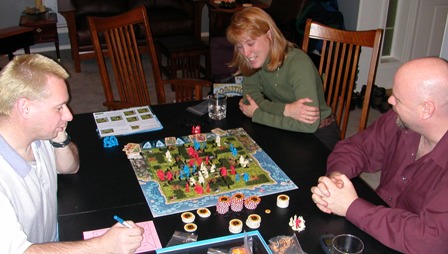 You may have noticed the poker chips in the photos. When we were in Vegas recently for Christmas, I was hell-bent on picking up some high quality poker chips. After some research and advice, we discovered the Gamblers General Store and found a great set of chips (these aren't cheap!). Besides using them for card games (mostly Texas Hold'em), we also use them as replacement money for games that have cheap currency (paper or cardboard money usually).

This was on my must-play list, mostly because it is so highly regarded by Mikael Sheikh, with whom I gamed in New York City last summer. He even implemented an online version of the game that I am now ready to try. KC has had this game on loan for quite a while and he offered to teach Ken, KevinG, and I how to play. 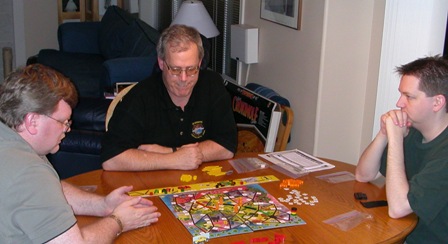 This is similar to some of the other transportation-oriented games I've played, and it reminds me the most of Paris Paris (though Bus is a bit deeper with more choices). It has some very interesting mechanics. The basic idea of the game is to provide bus transportation for folks in the city by building routes that connect to buildings (homes, offices, and pubs). Depending on the time of day, all of the people on the board will desire to go to one building type (morning - work, evening - pub, night - home). There is a [great description of the mechanics of the game over at Funagain (read Ben Baldanza's review from Counter), so I won't go into much more detail here. I like games with an economy of difficult choices and the opportunity to look ahead a bit and strategize. Bus certainly has this, and I liked it very much. I found myself trying to predict what moves the other players would make and trying to optimize my moves. 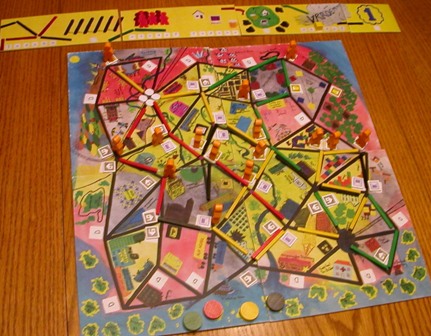 I got off to a decent start and was in the lead or close to it the entire game. I made some bad building choices towards the end, and on my last move I really needed to move 3 people to their homes to guarantee at least a tie. Unfortunately I could only move 2 of them, and my efforts to disrupt Ken's last move didn't pan out because he had a solid backup plan.

I'd like to pick up this game, but I'm very frustrated with the production quality (I'm having similar reservations about the game boards in Columbia Games' block games). The boards were very warped, hardly stayed together, and were difficult to read. Have the newer printings of the game improved on this at all? Leave me a comment if you have opinions either way.

KC (man this guy is prolific!) introduced another one of his game prototypes - presumably he dreamed this game over just in the past week. I didn't play it, but it looked fun and on the surface seemed to have some similarities to Mamma Mia!. 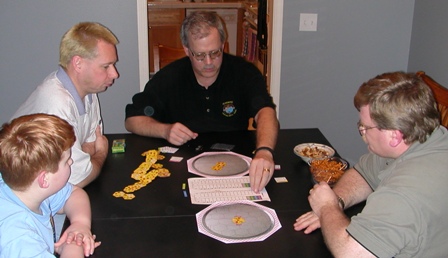 From the comments I heard during and after the game, this sounds like a good one and will be worth a try in the future. 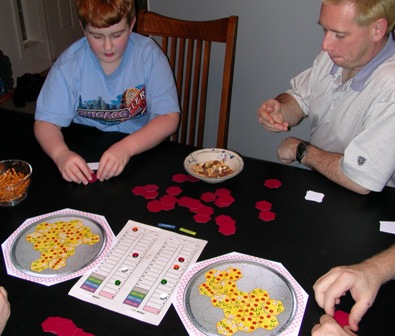 I read some favorable reviews of Scream Machine in the recent issue of Counter so I requested that this come out. KevinG owns the game and offered to teach Julie, KevinM, and I. The theme is building a theme park that will attract the most visitors - that's how the scoring track goes. This is a card game that has some interesting mechanics, but unfortunately the card design makes it very difficult to keep track of ride types and scoring. The designers could have spent some more time thinking about the human factors. A fun little game though, but probably not one I'll be interested in purchasing. I actually prefer Roller Coaster Tycoon to this game, and I know the kids would as well. 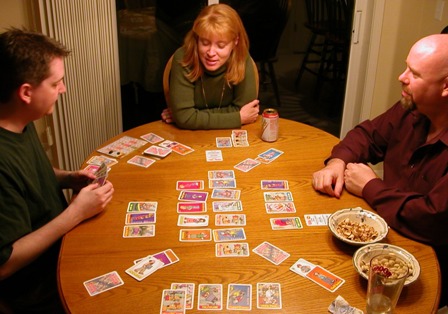