Board games have been coming out a lot at home so far this year. Last weekend, we brought out Age of Mythology again. One of my goals in playing the bigger wargame-like board games with the boys is to get them to start comprehending strategy. Not specific strategies, but rather just the notion of having some long-term goals, and devising some short-term plans to achieve those goals. All too often in these games they just start attacking without thinking about the consequences. In three player games this can be a major weakness, because often the player who avoids conflict will come out on top. 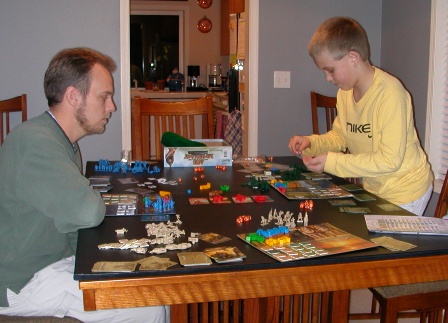 Matthew snaps a photo mid-game during Age of Mythology. Matthew played the Egyptians, Jacob the Greeks, and I was the Norse.

Jacob, at least, is starting to grasp the concept. There was much less fighting in this game, and he set out to try and build the wonder by the end of the game. I opted for my usual strategy of building the most buildings and largest army (mostly by not fighting very much). This was the closest game to date - Jacob finished with the largest army and came close to building the wonder at the end. If I hadn't converted favor into victory points late in the game, forcing it to end a bit earlier, Jacob would have caught me and won the game.

We were given Metro by some friends for Christmas and it quickly became a favorite of Julie and Jacob. This is the sort of game they will bring out after school when I'm not even around - that's how I know it's a favorite! 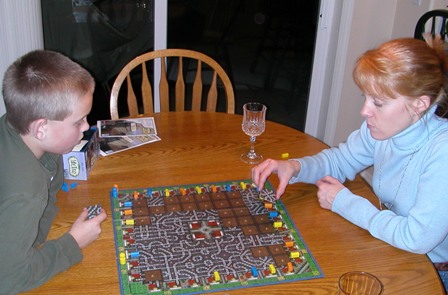 This is a fun, quick, light game that I simply have not figured out. I've come in last or second to last every time I've played, and have never been in contention. Maybe I just think too much. Jacob's strategy of ignoring all but 1 or 2 of his lines, and striving to maximize those seems to work pretty well.