Sunday after our successful game day, Jacob, Matthew, and I decided to play another game of Warcraft: The Boardgame. The last time I played a three player game, we used the standard scenario out of the rules. This time we downloaded and played the Orcs for Sale! scenario published at the FFG website by the game's original designer Kevin Wilson.

This scenario has a fairly symmetric layout and a standard victory point-based objective for players. The added twist is the ability to hire (fully upgraded) mercenary orcs at mercenary camps (any of the two-point objective spaces) for a cost of four gold. Players play each of the other three races (Night Elves, Humans, and Undead). These Orcs are very powerful and can be obtained early in the game. The one catch is that they must always be accompanied by one of your regular units. If they are ever left alone, they return to the pool of available mercenaries. 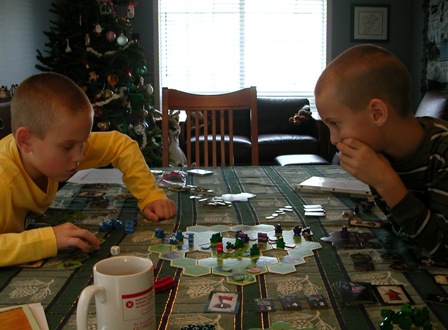 One key element of every Warcraft game I've played to date is resource scarcity due to (random) depletion of gold mines and forests. This forces players to rush to the center and claim additional resource centers. Jacob and I pushed to the center, and he decided to attack me when we were fairly closely matched. I urged him to reconsider since the only benefactor was likely to be Matthew, but he attacked anyway. Unfortunately for him, the dice went my way and most of his military was devastated. It can be very difficult to come back from a setback like that, and this one battle dropped him out of contention for good.

I was able to gain control of the center and fight of Matthew as he came in. It was only a matter of time before I was able to grab my 12 victory points and win the game. 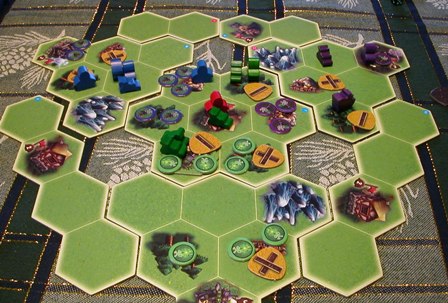 We still enjoy this game, but I'm finding it great on theme but light on strategy. Similar to the computer game, the "rush" strategy seems to payoff and it can often come down to who gets luckiest rolling the resource dice. I'm seriously considering some variants on resource depletion to allow for more strategic buildup.

One other note - we still haven't played this game by the rules based on some recent postings at the Warcraft Yahoo group. These are fairly major mistakes, so make sure you temper my remarks with the clarifications I'm about to give.

Sigh. I thought I was pretty good at reading and interpreting rules, but these were pretty serious misses on my part. I'll report back after another session where we play by the correct rules.