Today was supposed to be an afternoon gaming session at Kevin Graham's, but unfortunately Jacob wasn't feeling too well. We were all suffering from some form of allergy attack (perhaps related to the cold weather here coupled with our heating system kicking in coupled with an air filter that desparately needed cleaning). So we decided to stay home and not risk it across town.

Jacob, Matthew, and I elected to play another game of Age of Mythology from Eagle Games. We've played this 1.5 times and were eager to give it another run. We randomly drew cultures; Jacob was Egyptian, Matthew was Greek, and I played the Norse.

The first thing I need to mention is that in our first 2 games (we never finished the second game), we didn't play correctly. I discovered this early in today's game as I was referencing the rules. In the first 2 games, we played that every player took the chosen action in turn unless it was an attack. This means that if one player chose build, then the others would build after that. I guess I was just too used to playing Puerto Rico and didn't read the rules carefully enough. Only on the gather and explore actions do all players get to take the action. Obviously this changes the dynamic quite a bit, and I think the game is a bit easier when played correctly. 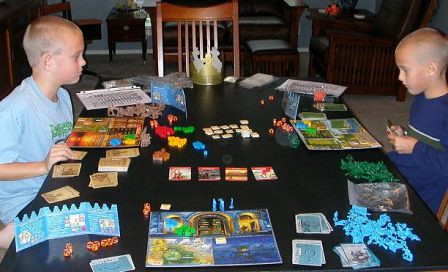 Things started off in a very confrontational manner. Jacob (pictured below) decided to attack quickly - he went after both Matthew and me in the first turn. With his elephants in hand, it made sense since they have an edge up on other mortal units. He defeated both of us and stole resources. He took things a bit too far though, and continued attacking until his own military was depleted, and that cost him dearly as Matthew and I sought revenge. 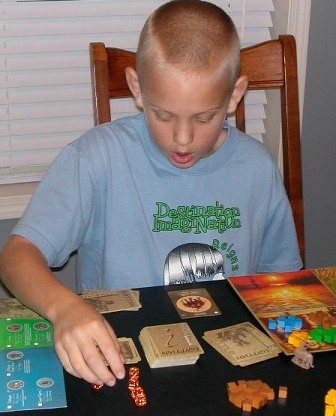 I opted for a build strategy while maintaining just enough defense to deter attacks on me. I was able to make a few opportunistic attacks when either Matthew or Jacob ran out of military units. Jacob and Matthew also need to work on their strategy and tactics for this game - they play "gather all" cards too frequently, and this allowed me to race even farther ahead. They both sensed my advantage and started dumping victory point cubes in the wonder category, assuming that I would never advance far enough to build a wonder. They were wrong... 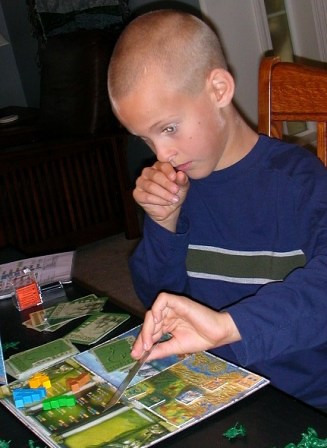 This turned out to be a very lopsided game. Jacob in particular usually stays even with me (he beat Ken and I in Wallenstein last weekend), but his mistakes early on hurt him. I ended up winning all categories (largest army, most buildings, and wonder). Chris 22, Jacob 1, Matthew 1.