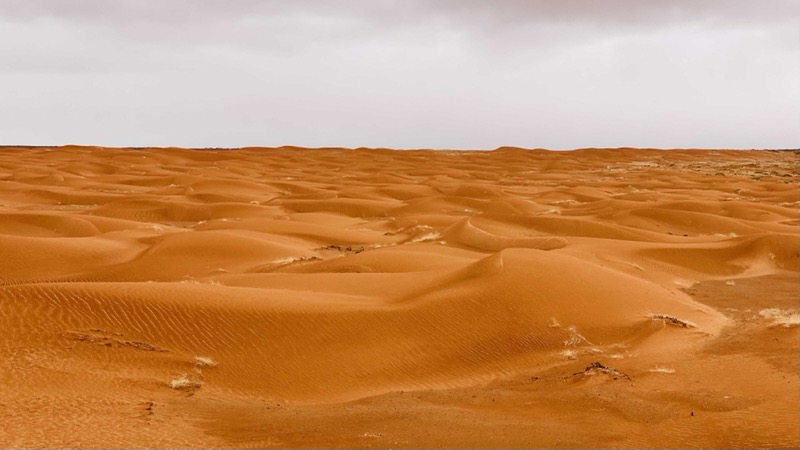 Horseshoe Canyon is a relatively recent unit added to Canyonlands national park and sits mostly on its own on the far west side of the canyon, north of the vast and remote Maze District. Our goal in Horseshoe Canyon was to find what are considered to be some of the most import pictograph panels in the US. 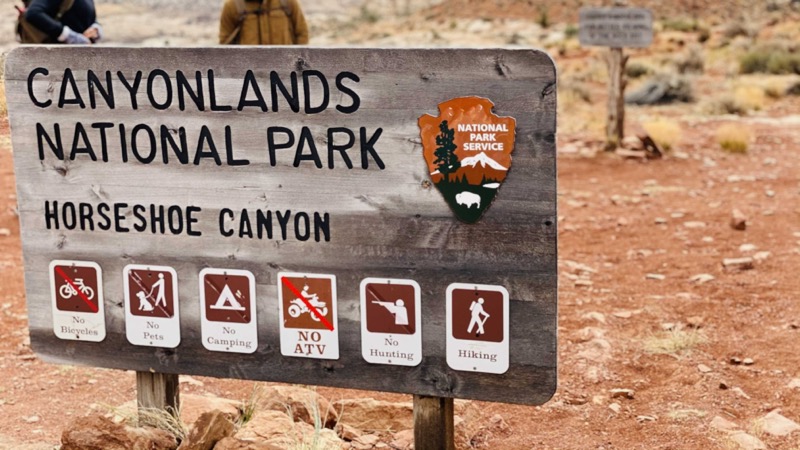 The drive in is not trivial. Probably 25 miles of off-road driving, took us over an hour each way, and with rain (which we had, including slushy sleet) the road can rapidly deteriorate. This drive was a good reminder about the complexities involved with touring The Maze, which would require probably another 60+ miles of driving on roads that supposedly get gradually worse than what we were on. This backcountry is where you see more cool stuff and fewer humans. Well worth it. The dunes you see at the top of this post were one small highlight. 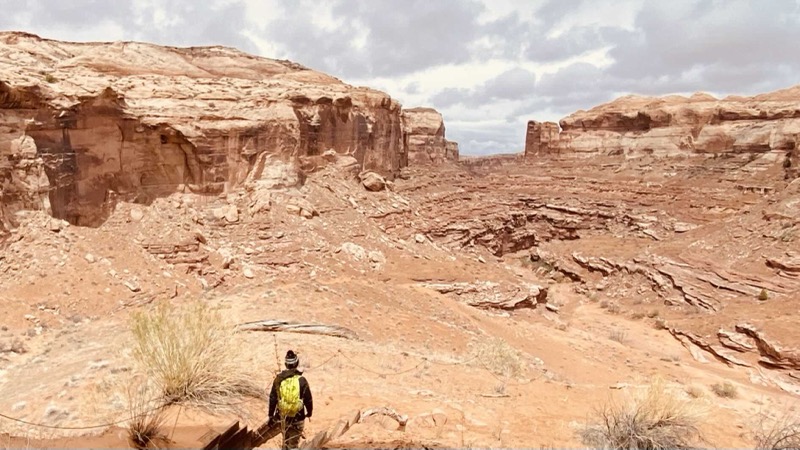 The canyon itself was not dissimilar from canyons we’ve explored in other parts of Canyonlands or even Cedar Mesa. I think the descent was around 800 feet or so, with the base being a mix of sandy wash and riparian cottonwood zones. We saw some very cool wildlife on this hike, but I’m saving that up for another post. Our total hike was between 7 and 8 miles. 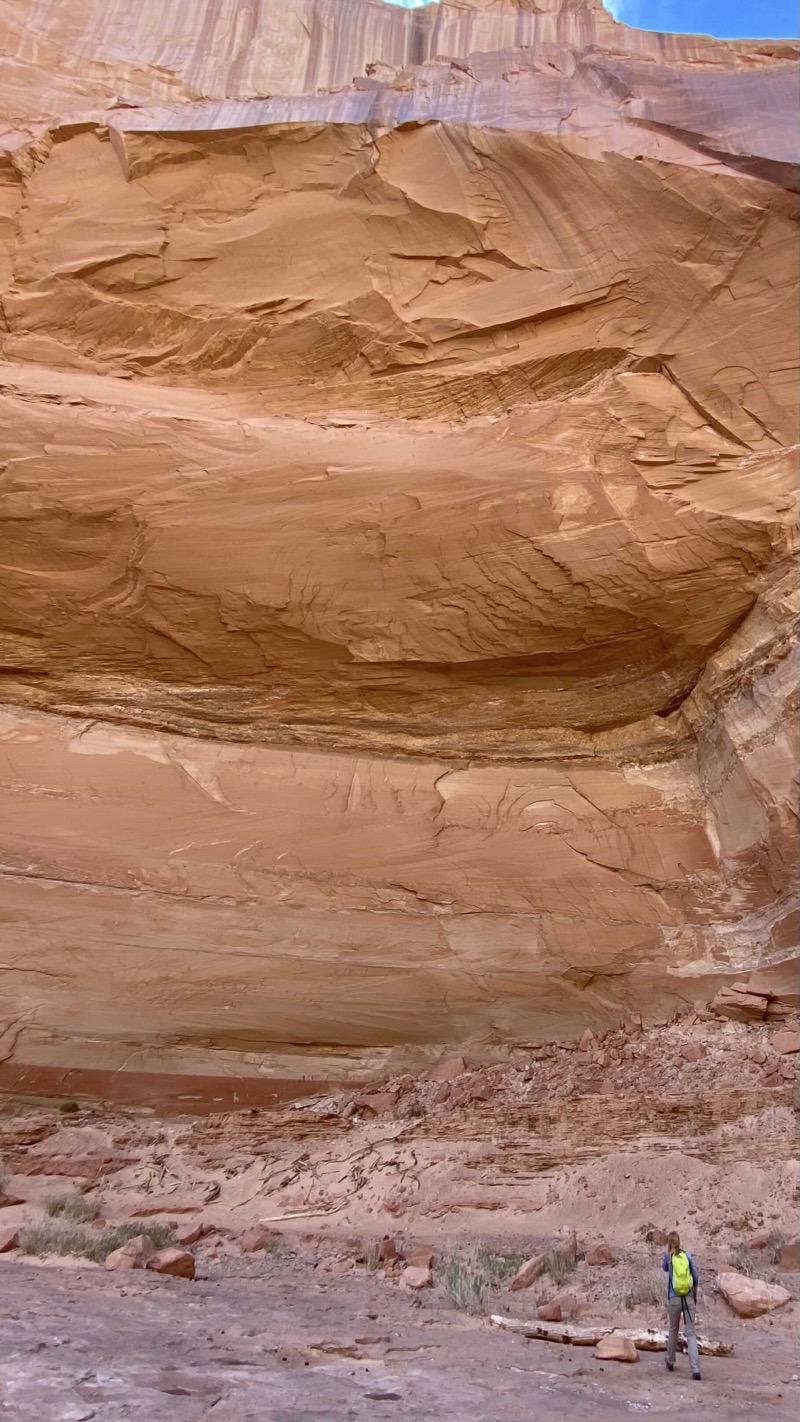 There are at least four distinct sites to visit in this part of the canyon. The scale is large: large canyon walls, large galleries. The style is Barrier Canyon and is supposedly a benchmark of quality for all sites in the Colorado plateau. The photo above is meant to show the size of the canyon walls relative to the panel sizes. Can you find the art here? Look way down just above the red band. 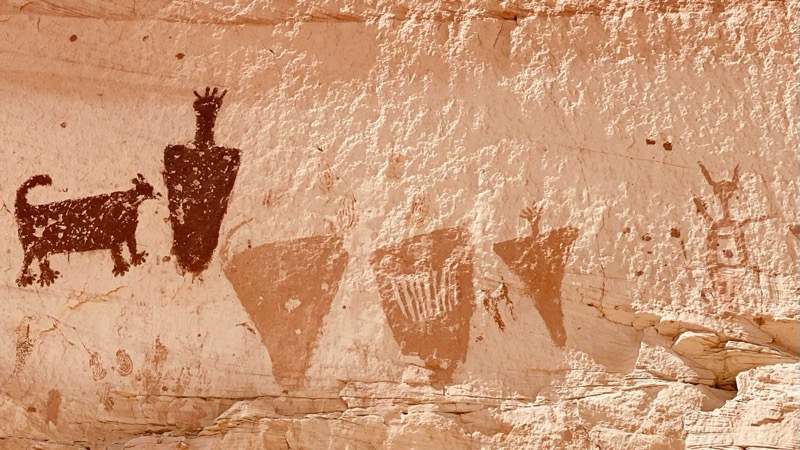 The human depictions were a mix of stick figures, trapezoid people, triangle people, boxy people, and at least one “sassy pants” human. The variety was staggering.

The final panel, at the southern most part of our hike in the canyon, was the Great Gallery. The pano photo above doesn’t give it justice; I cut off part of the left side past the rockfall, and the human depictions are at least life sized. See if you can find sassy pants human. Each section had so much detail. We would keep staring and finding more depictions and more nuance.

We escaped the canyon before the rain hit again. We had a perfect window of cool yet sunny weather during our time in the canyon. The drive out was wet and muddy and became quite slippery at times, pushing the limits of what we felt comfortable doing in the van. A safe arrival at a dispersed campsite near Goblin Valley was very welcomed.