Bruce and I played approximately 1.6 games of Enemy Action: Kharkov. 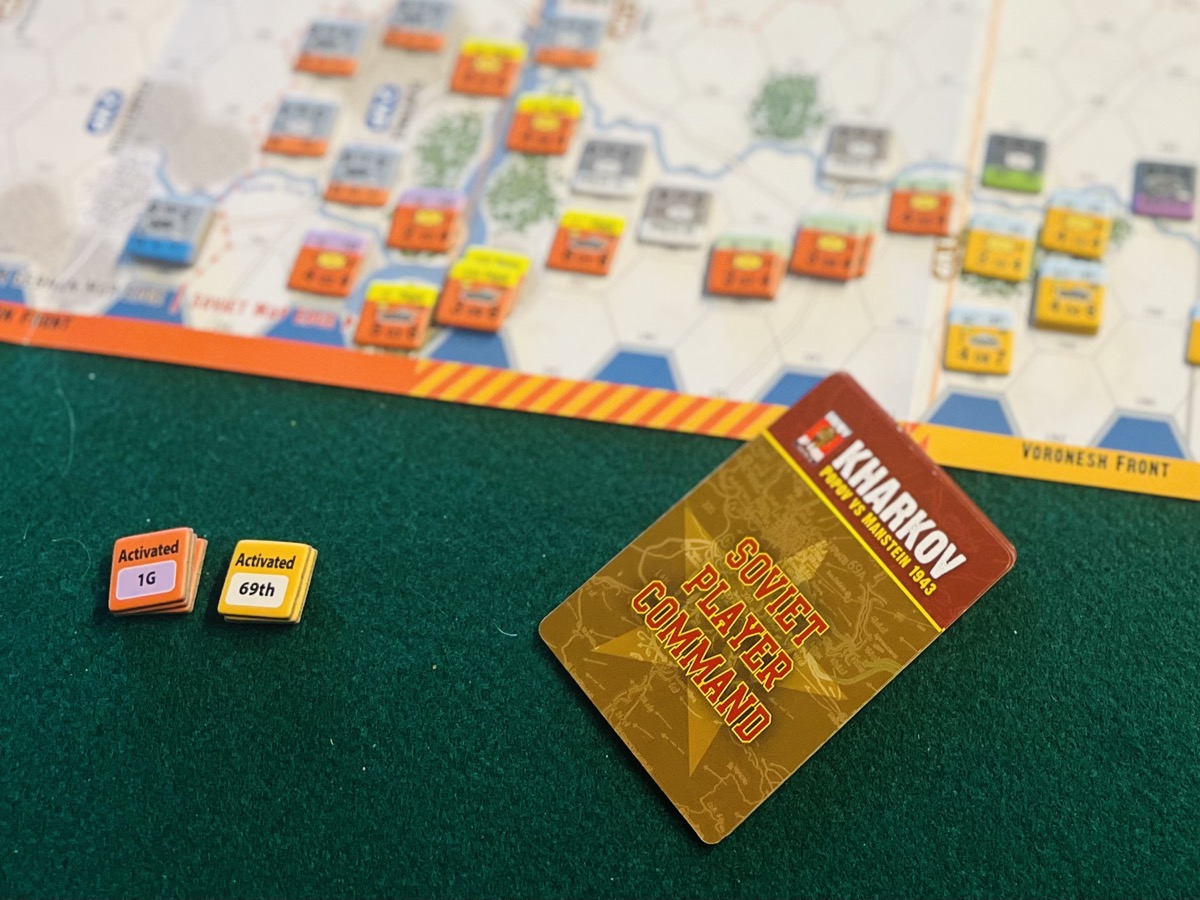 Cards and counters for Kharkov

We’ve been talking about this game in a group chat for months yet I was only mildly intrigued. I don’t have the space to store nor the opponents to oppose in wargames these days, so I’m rarely dialed into the hot new stuff. Add to that some sour experiences with Compass Games lately and you can see why this game mostly stayed under my radar. I guess I had to see to believe. 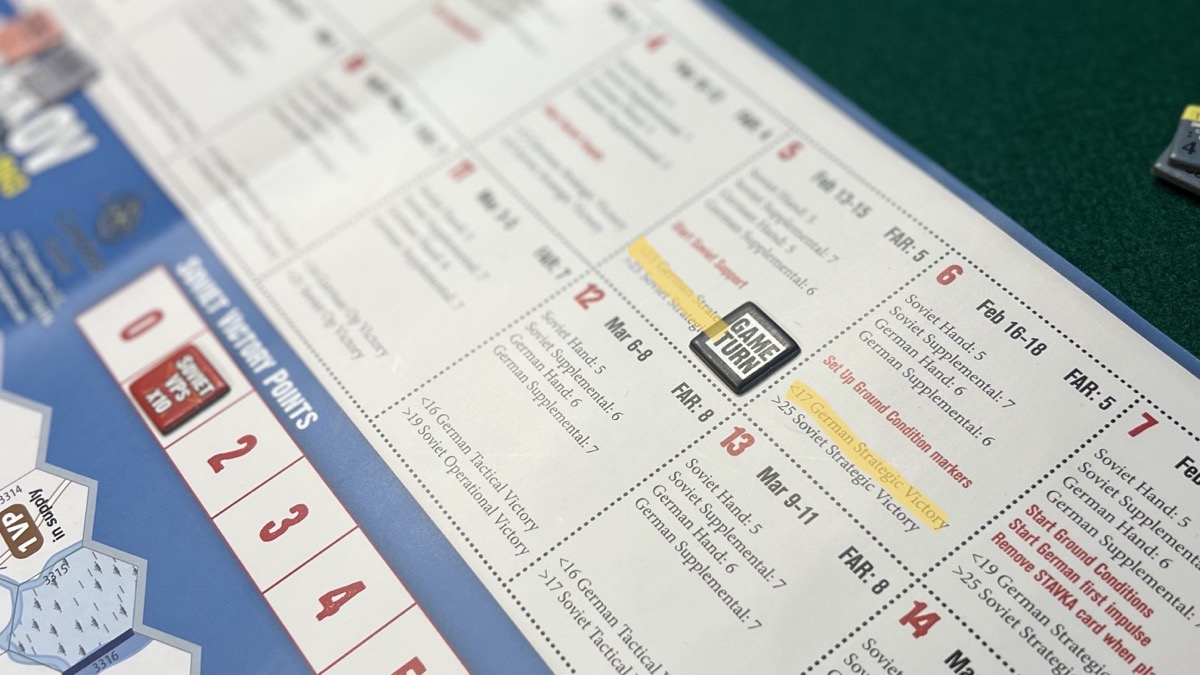 Our first game was me as the Soviets trying to break out, smashing and grabbing victory point hexes. I did some smashing but not nearly enough grabbing and stalled out, failing to reach a minimum threshold of victory points by the end of turn 4. I like that the game ended at that point. The turn track dictates an operational tempo that I failed to meet, so why continue? I’ll talk more about why I failed in a bit.

Rather than pull out a different game we decided to switch sides and give it a go. In the small number of plays Bruce has had the Soviets hadn’t been successful with a breakout so hadn’t been able to see the mid-game yet.

Kharkov is a card-driven game where you have a decent idea of what cards will come into your hand (relatively small card pool that grows over time), but few guarantees on what you’ll get for a given turn and in what sequence. The cards are tied to formations but have multiple uses. Many cards will activate all units in a given foundational formation, allowing them to make major thrusts forward or re-organize to setup a better defense. The most powerful cards let you choose a formation within a given army (higher level) organization. A key catch is that units in a given formation cannot be activated in consecutive rounds by a given player. This means if you want to drive a single formation forward quickly and repeatedly, you have to bounce back and forth between it and other formations. 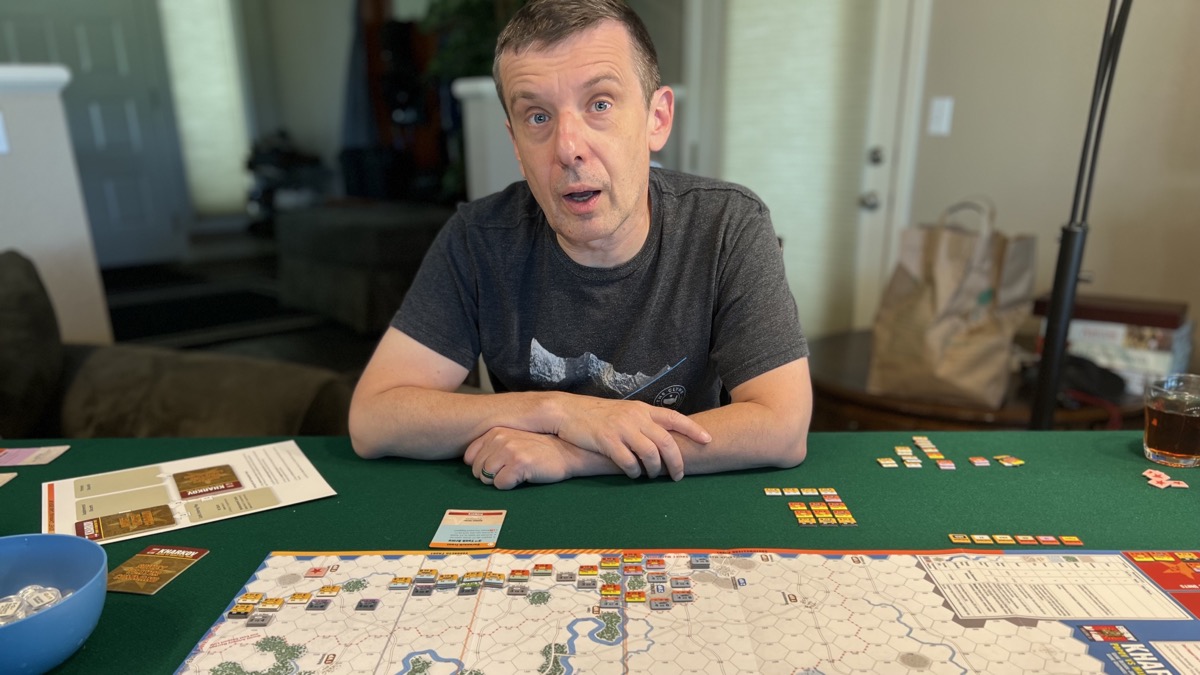 Bruce ready to launch his offensive in our second game

I made the mistake in my first game of using my cards for the given formations, resulting in a broad front movement with not enough penetration. Or rather, not enough quickly enough to take what I needed to take before the German reinforcements showed up. I also had some very poor luck in a few of my early attacks, forcing me to spend multiple cards to make minimal progress. Bruce had better luck early on, but that played only a small part in his success.

His approach for the Soviets early on was to skip activating several lower-value (mostly infantry, little to no armor) formations and using the (seemingly) weakest option on his cards several times: most cards allow you to activate any single unit in a formation. This still counts as an activation for that formation, but allowed him to exploit some of his breakthroughs and run units up to grab VP hexes (towns and cities). 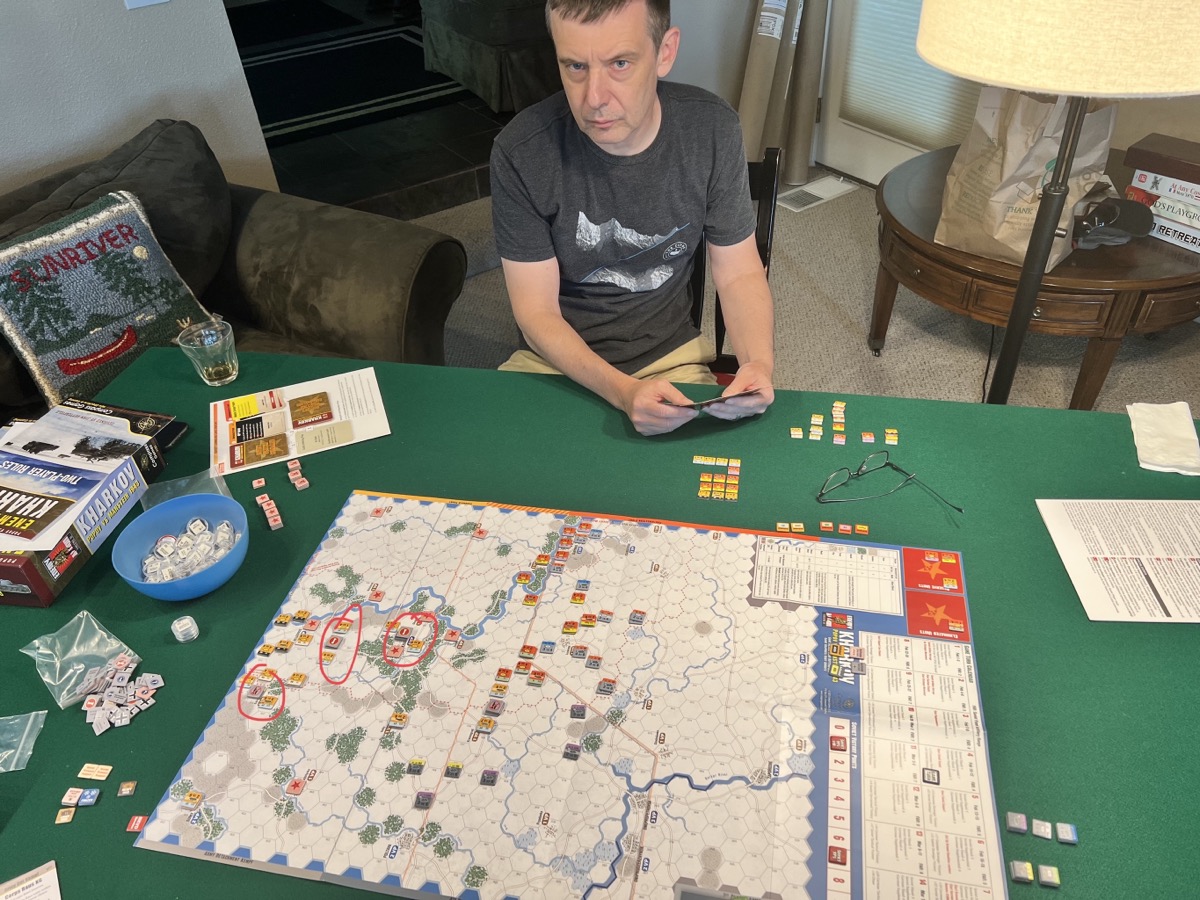 Bruce should look happier than this given all of his accomplishments

Because the Soviets don’t have to worry about supply at all this turned out to be a solid strategy for Bruce, and arguably (obviously?) the way the Soviets must open the game. To make matters worse, he surrounded several of my III SS units which I failed to rescue. This left them behind his lines, gradually withering off the board and put on trains to Siberia.

We had to step away from the game to play a larger game with others, and never managed to return and finish. That’s a shame because we were solidly in the mid-game and neither of us had a handle on who was in a better position. I’m fairly confident that was still Bruce, especially given that I’d never be able to rebuild my very powerful SS formation.

One very attractive feature of this game is that it uses the solo AI system first implemented in John Butterfield’s Bulge game. I enjoy playing wargames “solo” where I play both sides, but a game like this with hidden information (cards) makes that tough. Bruce is understandably concerned about the Kharkov implementation given the wide range of options for the German AI to choose. This makes the AI “bot” more challenging to run. If evaluating options for the other player means going through a difficult algorithm for 10 minutes on each activation this won’t be a fun experience for most of us. Some of these concerns are discussed in this thread; in any case I’m not buying any new games until we return to NY next spring so I can afford to wait and see.

Bruce was a very good teacher and helpful coach as I navigated this new, very enjoyable game.