One of the most important components of my productivity environment is my reference system: where I can dump just about anything for future use on projects, or as a just-in-case repository. “Just-in-case” could mean, for example, storing receipts for medical expenses in case there’s an audit in the future of how we use our health savings account. Reference systems are a core part of the Getting Things Done methodology.

I’ve gone through a few different tools over the years:

Towards the end of 2017 though I started to look for an alternative to Evernote. Two main reasons:

I heard about this app Bear on a few podcasts and Apple news sites I follow and decided to experiment with it to see if it would work for me. I kept my Evernote database intact, but did a full export from Evernote and import into Bear. I turned on the monthly subscription (I can stop this at any time) for Bear to get synch enabled, then started to use the app on my desktop and mobile devices.

The initial sync took a long time to complete, probably over 24 hours. My Evernote database was about 6.6GB so I can see why it would take a while. It did make me nervous though as I watched things materialize. It appears that Bear does multiple passes: first downloading the plain text and note titles, followed by attachments like images and PDFs. It all came together eventually.

My first disappointment with Bear was with the tagging feature. I love how the tagging comes from the note itself (using hashtags, like #finance) rather than metadata as a sidecar of the note. What I didn’t like was how hard it was to put the tags in properly as there was no autocomplete. I adopted the Michael Hyatt Evernote tagging system a few years ago so wanted the same hierarchical structure in Bear that I was using in Evernote. Without autocomplete it was just too tedious. So I flattened my tags and things were OK.

The biggest benefits of Bear? It is super fast and natively supports Markdown. I can automate easily (via iOS tools like Workflow) and the sharesheet in iOS works well at capturing full web pages. This is a huge improvement over Evernote, which can make it very difficult to see the formatting styles in use. I continually had to simplify formatting in Evernote to get things to a readable state. Capture just works the way you expect it to in Bear (I honestly just want the content: text and images) and it even converts much of the HTML back into easy to edit Markdown.

Earlier this year the Bear team released updates to all or their apps that added tag completion in the editor, allowing me to revert to my hierarchical structure. See this screenshot: 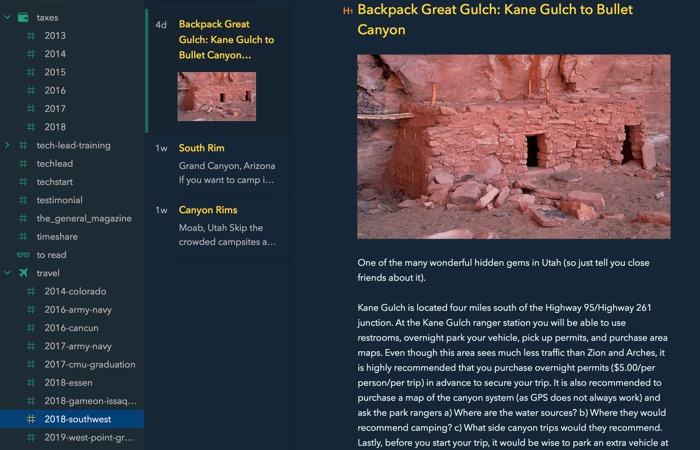 The hierarchical tags are what you see under taxes and travel. So the taxes/2018 tag looks like this:

My main concern is the longevity of the company and therefore the app. The good news is the app has robust export capabilities and I can easily extract the raw Markdown text along with any attachments.