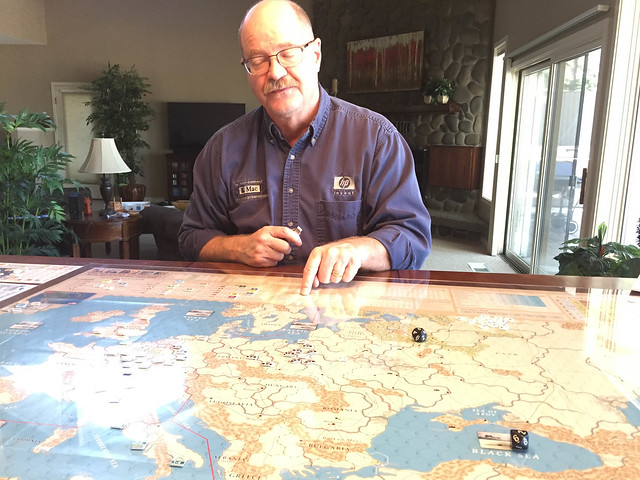 This is a follow-up to my Supreme Commander post from last week.

Ken and I played through about 6 turns of the campaign game for The Supreme Commander last weekend, and the game is really growing on me. This on the heels of playing some Unconditional Surrender! World War 2 in Europe and thinking that there's no way Supreme Commander can measure up. I think these are both very high quality games.

Ken and I wanted to get a good enough grasp so that we can dive in and play all day this coming Sunday at Salishan. I played the Axis powers while Ken took on the Allies. We ignored the Soviets for this play given the unlikelihood of them getting involved in 1939 / 1940. 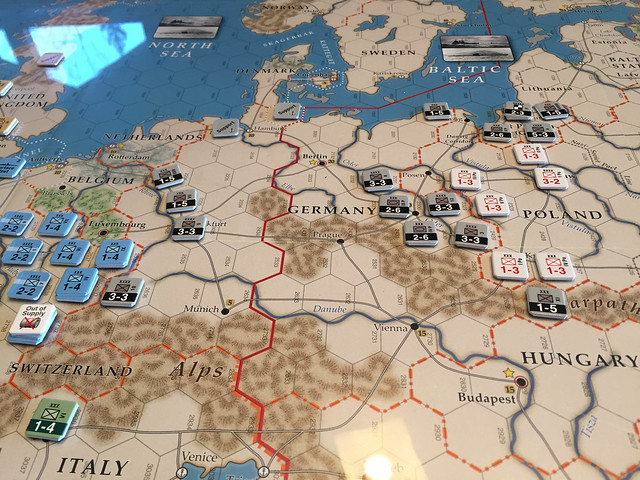 I setup my initial offensive on Poland almost identically to my solo play-through. The keys are to have infantry armies involved in every combat (there is a tech tree in SC and I chose to upgrade the German infantry, thus giving them a +1 factor when an infantry army is involved but not just a corps). A corps is essentially one step of a three-step army and is this relationship is one of the key mechanisms of the game as I called out in my prior post. It is simple to build up and break down armies and in some cases it will be critical to do so (transport, upgrading to new armies). 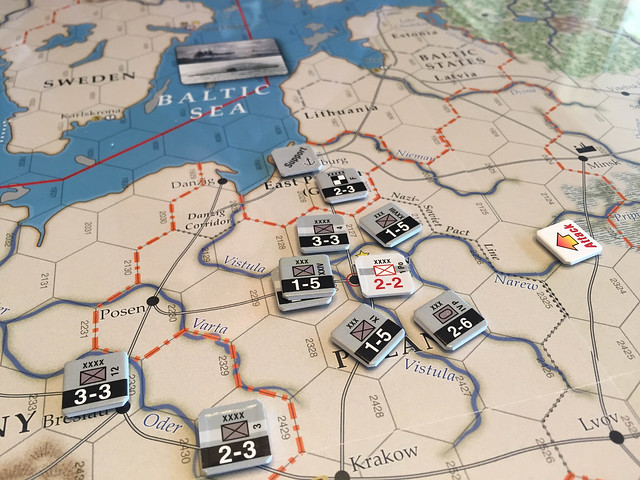 Things were going so well for me on the combat front until I hit Warsaw, and consecutive rolls over three turns of 1 or 2 prevented me from eliminating the last Polish unit. This is a big deal for a few reasons:

Ken and I discussed this a lot and came to the conclusion that there's no way to mitigate this. I was on the highest column on the CRT, was maximizing die roll modifiers, etc. Short story: if you invade Poland you might finish the job on turn 1, you might finish on turn 4. 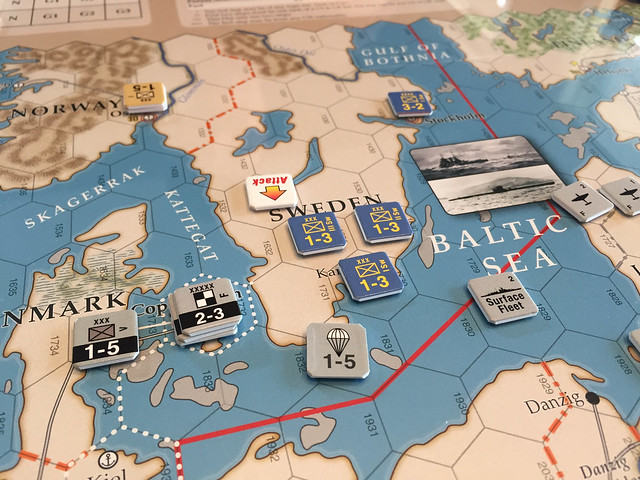 I then turned my eyes north to Scandinavia, taking Denmark quickly but with eye towards Norway and Sweden. All that money I spent rebuilding steps in the stagnation in Poland combined with failed diplomatic efforts meant the Nazis had not managed to expand their navy (subs or surface). This meant that the UK had total domination in the North Sea. So while I would have much rather just gone after Norway, I had to pick Sweden (which had a much stronger standing army) instead so that I could just swim over the Baltic Sea.

Strategically this was a terrible move. With only a single surface fleet to carry my amphibious assault, I was forced to rely on just one corps landing along with an airborne drop. I had less than a 50/50 chance of succeeding, failed, and the entire operation was a bust. I did this as my last action just so Ken and I could see both an amphibious assault and an airborne drop and work through the rules. At least that's my excuse.

Ken spent his time as the UK building his fleet and a few corps, relocating some to the Mediterranean as well as a token force in France. He also hopped over to Copenhagen to try to help the Danes. With the French he quickly built an HQ to solve some supply concerns around the Maginot line and deployed some troops along the Italian border. I should also note that he spent all of his diplomatic efforts trying for the 1 in 10 changes of swaying the Italians towards the Allies. It is a long shot for them, but any roll will succeed with a 1 so it is a reasonable chance for the Allies to take as long as they don't have other diplomatic agendas.

A few things we still need to address as we start our game on Sunday: