I'm hosting a week-long war and board gaming blowout event at our beach house in just over a week. We are selling the house and this is our swan song event. I hosted my first Salishan gaming weekend about 10 years ago so this is a landmark conclusion to what has been an awesome run of gaming weekends with an amazing group of folks.

The front half of the week is dedicated to big ol' wargames. Organizing and scheduling this is a bit intense as we can't be as adaptive and seat-of-the-pants as we typically are when playing lighter games. Many of us are playing new games that have extensive rules, which means a lot of up-front preparation. Yes, I've been studying and "practicing" for a game weekend.

On the docket for me for the week will be:

I haven't played six of these games so for the past few weeks I've been preparing myself with either solo walk-through play, or short scenario plays with Doug.

This post is a recap of my experience trying to learn The Supreme Commander. 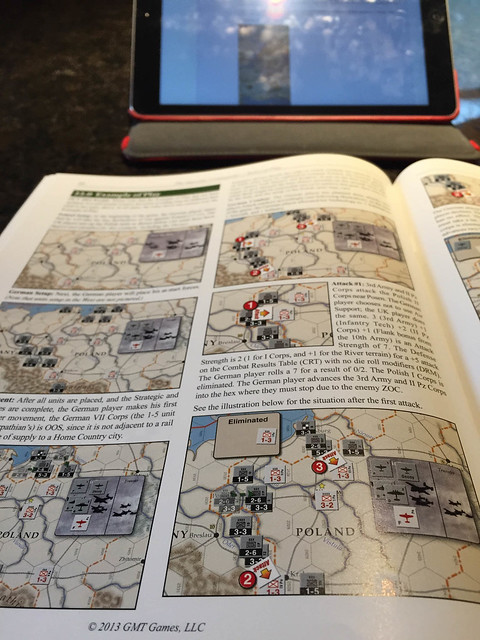 Supreme Commander is a theater-wide strategic game about WWII in Europe. It is in the same tradition as one of the first wargames I ever played (back around 1980 or so): Rise and Decline of the Third Reich. It came out about the same time as another European theater game, Unconditional Surrender but the two games are quite different. I've been exploring Unconditional Surrender with Doug and my brain hurts just trying to keep the two games straight.

I have a hard time learning games of this scope just reading the rules (the rulebook plus scenarios and example of play is 52 pages) so my strategy is to setup an introductory scenario and play through things a bit to see how the different parts work together. 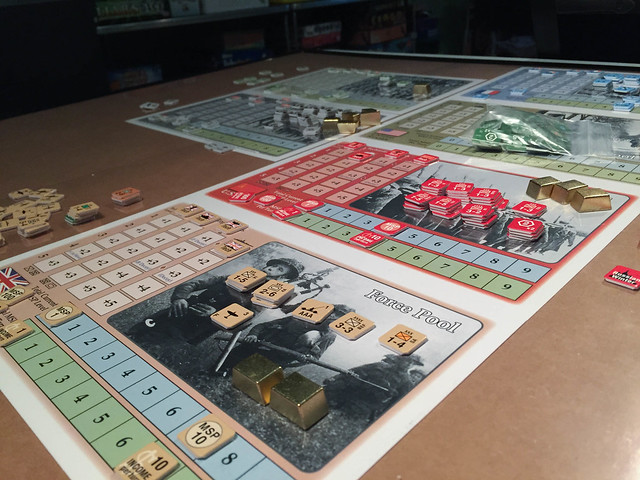 I setup the full campaign scenario, Europe at War, not because I wanted to play through the whole campaign but because it has pretty low counter density and pretty much only involves the (likely, but not required) German invasion of Poland plus a bit of maneuvering by the UK, France, and Italy.

The rules are fairly well written, but man are there a lot of exceptions and special rules. This is generally the case when dealing with a theater game like this that involves diplomacy, economic systems (Lend Lease, Murmansk Convoy come into play for example). There's some oddness to how the factions are setup initially as well, with the German player also controlling Italy but with there being a chance that Italy comes in on the Allied side with some lucky diplomacy. 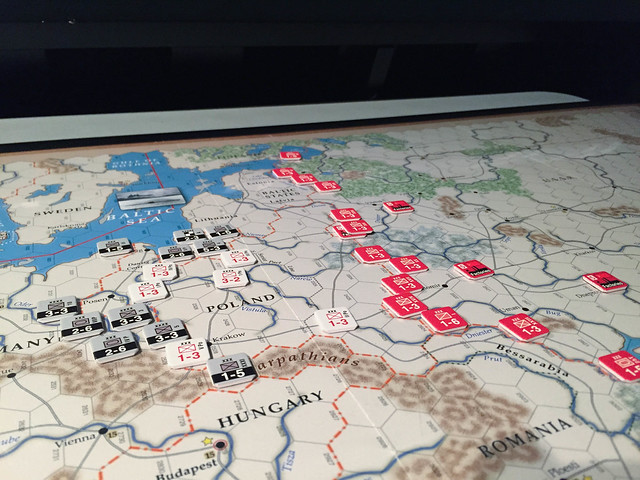 There were many "ah hah" moments while I played through this. For example, I don't think it is possible to move an entire army counter via naval transport. This means it is a pretty stupid move by the UK to build up the British Expeditionary Force army right there in the UK unless you only plan to use it for defense (that's not very expeditionary!). It seems like the right approach is to transport the individual corps units to where you want the army to form, then use the build-up action to bring onto the map the full army unit (or even a step-reduced army unit). Reading the forums on this game, it seems like this build-up mechanic is actually the key way you bring on new elite-type units as well as even mediocre corps units can potentially be built up into awesome guard or SS armies.

In the above photo you can see the east front at the start of the game. I kept the setup similar to the example of play in the book with some small variance so I would be forced to see how different choices impacted the play. 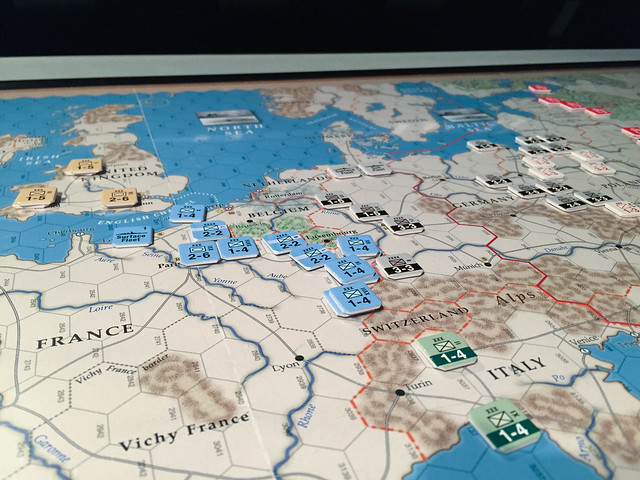 I also went ahead and set up the western front, plus the Mediterranean, as there are some build-up and deployment options for the UK, French, and Italians at the start. Should Italy rush to get more troops to North Africa, or start piling up some forces near France for a possible land grab? I really don't have a clue as I didn't get that far. 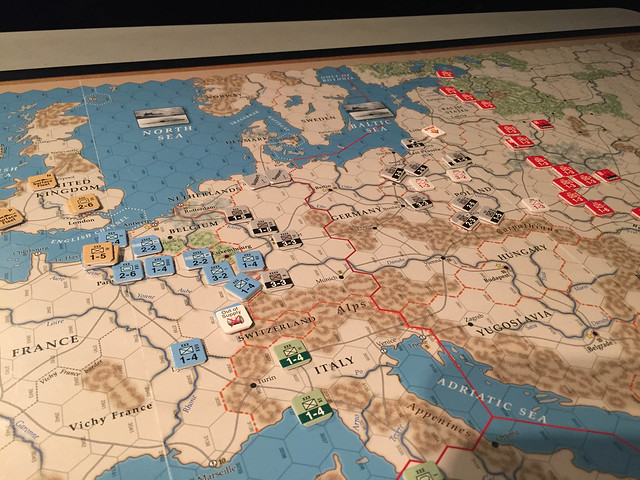 Air and naval power are abstracted pretty well in this game, though I had a hard time understanding how the navies properly operate until I re-read the rules several times. The navies live in ports but can be deployed out to naval holding boxes during strategic naval warfare. I didn't get into the interception rules yet but they look straightforward.

Ground support with aircraft units was easy to run. If only one side has aircraft, they will add a bonus to that side. If both sides do, there's a pre-combat air battle to see who sticks around to help out the ground battle.

I was able to explore the diplomatic actions as well. Each side (not each country) can take a single influence action each turn to try to slide a country closer to alliance. These are costly actions, especially when trying to influence someone that is already leaning towards the other side.

In summary I think I'm ready, and I look forward to playing through some more with Ken this coming weekend. Having another person involved helps immeasurably (1 + 1 > 2) as they tend to fill gaps for the other side and help come up with reasonable answers when questions remain.