I take business trips to NYC periodically and have a routine conversation with Julie before each trip:

Me: Hey Julie, you should come to New York with me this trip!

Julie: Shoot, I really want to but I've got (insert really important commitment here) and I just can't swing it this time.

Note that I'm not being sarcastic when I say "important commitment" here.

This time I got lucky.

My arrangements were to fly out Monday morning and return Wednesday night. Julie matched my flights (and managed to earn Delta Sky Priority on this trip!) with the direct Delta flight to JFK arriving around 3pm on Monday. I had a busy work schedule but free evenings and we endeavored to maximize our experience.

We took the taxi from JFK to the Westin Times Square which took close to an hour. Normally I prefer to take the JFK sky train / subway combo as it is more reliable and usually gets me to Manhattan in less than an hour. I needed to make a few calls on the drive though so the subway was not an option. We quickly checked in to the hotel and cleaned up a bit for our fancy dinner and show.

We walked to the TKTS booth in Times Square to explore our limited Broadway show options. Monday is a dark day for most shows so we opted for Phantom of the Opera and purchased our tickets.

I chose 21 Club for dinner and booked a reservation online for 5:45pm. This was a new spot for me and is somewhat legendary, though I suspect it's quality has diminished a bit over the years. The place is dripping with character; checked red and white tablecloths, abundant staff, quirky adornments, and a clientele smartly dressed (no jeans or sneakers allowed, coat required for men, they dropped the tie requirement a short while ago). Our service was phenomenal and my Maker's Manhattan very tasty. The food was average unfortunately and not memorable. We skipped dessert to make sure we could make it to our show. 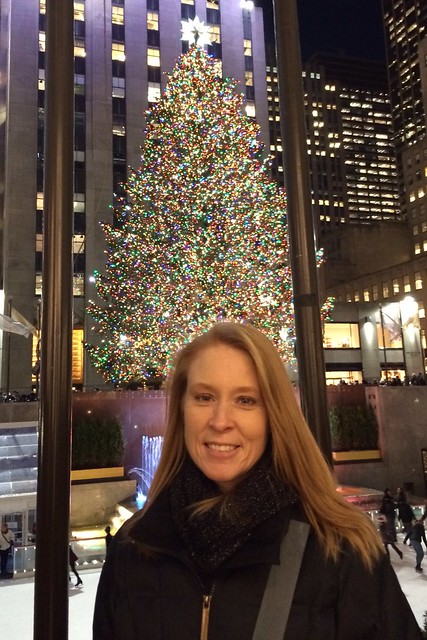 We did make it to Rock Center though and took in all the Christmas splendor thereabouts. The building light show at Saks was also fantastic.

Let's talk about Phantom of the Opera. Julie and I are convinced this is some sort of cruel joke played on tourists and large groups. I've been to a dozen or more Broadway shows going back to 1982 and this was by far my greatest disappointment. And this is the longest running show in the history of Broadway! The theater is huge and felt impersonal. Embarrassingly, Julie and I had to consult Wikipedia after the show to make sure we understood what was going on. Much of the plot development happened during operatic singing that was often impossible to hear and understand. I can't really comment on the acting as there didn't seem to be much going on in that department. The only saving grace was the lighting and stage production. The scenes in the underworld with the Phantom and his boat were breathtaking. Julie and I had plenty to discuss after the show over Guinness, Jameson, and dessert. Very disappointed and we were determined to right the ship on Tuesday.

I spent time in the hotel room late Monday night working on a better plan. If I screw this up Julie may never return to NYC with me! My first step was to book a table at Auereole near Times Square. This is a well reviewed, prix fixe "progressive American" restaurant. They are clearly used to the theater crowd coming through and were anxious to accommodate an accelerated schedule to make sure we could make our 8pm show.

Dinner was phenomenal. Julie had a salmon gravlax followed by beef "POT AU FEU". I had Matsutake wild mushroom broth and pork tenderloin. The beef filet in Julie's dish was some of the most tender I've ever had. Dessert and wine also did not disappoint.

I skipped TKTS and bought tickets (full price) the night before for Beautiful: The Carole King Musical, which is currently in previews (I think this means it won't be officially reviewed by critics yet). We were 5 rows from the orchestra on stage right and had perfect seats for this show. How was the show? Best I've ever seen, but I'm also a huge Carole King fan (I've been known to sing So Far Away in karaoke, so be careful). The easiest comparison is with Jersey Boys, as it tells the story of someone growing up in greater NYC in the late 50s and 60s, the songs they write (or perform), the lovers they find and lose, and ultimate redemption. What made this show special was the lead Jessie Mueller and the other primary cast. If you aren't a big Carole King fan you'll be blown away by the songs that the King/Goffin and Mann/Weil teams wrote throughout their careers. This for example. We lucked into seeing Once
when we visited in spring of 2012 with the boys and that went on to win 8 Tony Awards. I suspect Beautiful will have a similar future.

I think I redeemed myself. Maybe I'll be able to bring her back again next year.