Life is a bit less hectic these days, which means gaming activity has picked up. I've managed to host a few different gaming sessions and even attended one at Mike’s last week. Let’s recap:

Jacob and I played a two player game of this after Thanksgiving, playing one species each. As many have said, the rules are clear and concise, components are outstanding, and I think there’s a good game in there. Unfortunately I suspect it isn’t optimized for two players, two species. If we try it again with two, we’ll each play two species to introduce more competition and flavor.

The mechanics remind me a bit of the Splotter game Bus - plot your moves out for the turn, and pay close attention to the sequencing and what your opponents are choosing. I supposed you could say the same about Agricola, Pillars of the Earth, and Caylus, but it felt like Bus to me. Jacob ran away with tundras as I underestimated the value of controlling and scoring those each turn. Excited to try this with 3 or 4 players.

Played this at Mike’s last weekend. Somewhat dry game but there’s depth there, though I’ll need a few more plays to rule on this one. I had a hard time seeing card combos and strategies emerge - probably not surprising in a first learning game but I usually latch on a bit faster to at least a few concepts. Will be interesting to see strategies emerge on this one. 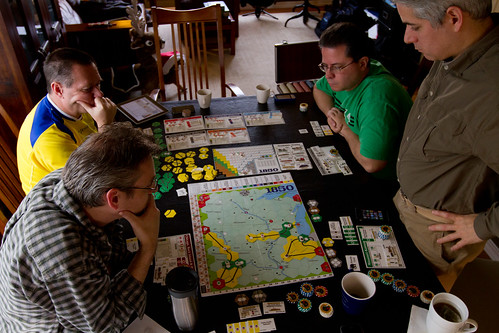 I hosted a wonderful 18xx session two weekends ago, playing 1850 with five players in about six hours. Great study in contrasting approaches - Chris S was a great operator and engineer (he’s a very skilled and experienced 18xx player) while Mike played the role of investor playing a minimal operating role in the game. They both finished within spitting distance of each other (a virtual tie given the likely banking errors throughout the game) while I pulled up the rear. I missed an opportunity to shift an engine and dump a company about 2/3 through the game and had to make some difficult choices to keep myself in the game (meaning - I still finished last, but could have ended up much worse without some financial engineering). The great thing in my opinion about 18xx is that I generally have as much fun losing in 6 hours as I do winning. Not as much, but just about as much.

Doug brought over his unplayed copy of 7 Wonders last night as I hosted a regular Tuesday night gaming session. This game is very easy to learn, plays in about 40 minutes, and looks to be a keeper in the mid-filler range. We played twice and in both games scores were close but the player collecting the sets of technologies managed to win. We deduced that even if you aren’t going after that as a primary strategy, you need to be in the technology game or else you’ll cede too many of those cards to your opponents. Mike and I even tried to bury several of them in the second game but Doug still managed to win by focusing on them. Not sure I need to get this game but I do look forward to playing again soon.