Next weekend I'll be spending about 3.5 days in Sunriver with Doug and crowd at his "WBC West" event. This will involve mostly wargaming with a little bit of lighter fare thrown in at nights. Doug and I will also be seeing Wilco play in Bend on Saturday night.

Going to an event like this where I'll be playing new (to me) wargames requires some preparation. Two games I want to play are Napoleonic Wars and FAB:Bulge. At a minimum preparation means setting up the game and working through a sample solitaire turn or two, but Jacob's eyes lit up when I suggested we play a wargame on Saturday afternoon / evening. He chose Napoleonic Wars and I set out to read enough of the rules to get us started. I let Jacob play the French - slightly less to manage in a 2 player game as he starts off only controlling France and Spain, while the coalition player runs Russia, Great Britain, and Austria. 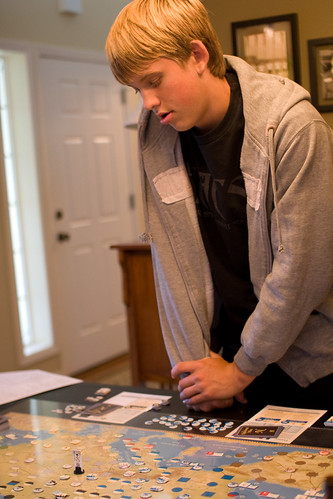 As expected the first few rounds were slow going. A round consists of a series of impulses (usually card plays) by each nation in a fixed order. Like many other card-driven games (CDGs), the player usually has the choice of activating an event or playing the card for operation points which can be used for movement, drafting new troops, and influencing diplomatic relations. Jacob turned east from the start, marching Napoleon's army towards Austria. I had to respond by gathering Austrian forces and bringing Russian troops in to reinforce, ultimately joining the Austrians and Russians together in a single army. Meanwhile, the British harassed the French and Spanish in the seas, taking control of the Atlantic and Med by the 3rd round or so. 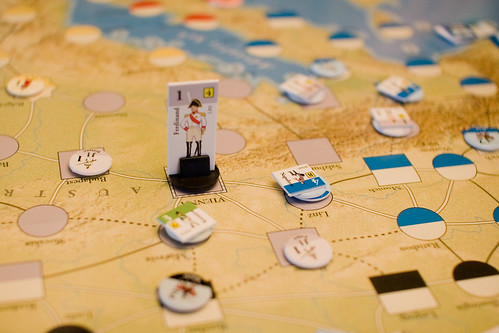 We got sidetracked later Saturday evening watching the Olympics and resumed our play on Sunday morning. We knew we would get one turn in max after the first turn ended, so when the peace phases came up and we had to choose how many cards to give up to influence the die roll, I had a choice to make. Jacob was in the lead by one point by virtue of a key he took in his last move in Austria and sacrificed a card to add one to the peace roll (if a 6 is rolled on a single D6 the game ends). I could have given up 2 cards from any of the 3 countries I controlled, but opted to give up just a single card and let the die roll, knowing we would have to end the game anyway. Of course a 6 was rolled and the game ended with Jacob victorious - not a satisfying ending but appropriate. We learned enough to get down most of the mechanics and Jacob looks forward to another play. I also still need to introduce him to Hannibal.