Apologies for turning these Europe posts into a drawn out series of publications not unlike a pulp serial series. Life has been busy again and blogging usually is the first thing to go when priorities compete for my attention.

I already posted about the non-Bulge related tourism we did in Belgium, so what remains are three posts on our visits to various significant locations related to the Battle of the Bulge from December 1944 - January 1945.

My readers range from folks who know little more than that the Battle of the Bulge may have happened in WWII, to those that know a lot more than I. My deep(er) study began about a year ago after some email conversations with Tim Cockit and Max Michael where they provided recommendations after a few trips they made to the Ardennes. My primary sources were:

The first two were easy to read overviews of the battle from the Allied and German perspectives, while the Tour book is the indispensable guide book that I brought on the trip. You can fill in some more details by reading the fine Wikipedia article on the Bulge.

By the fall of 1944 the allies had resigned themselves to waiting out the winter along the German Westwall (Siegfried Line) after heavy fighting around Aachen and the Hurtgen Forest. The Allied supply lines were over-extended and most divisions were significantly below their full strength levels. The result was a focus on stabilizing existing lines as much as possible and awaiting warmer weather and stronger supply before the final push to Berlin.Hitler had no plans to sit still and wait for the Allied advance.

Starting in September Hitler began formulating his plan code-named Wacht Am Rhein (watch on the Rhine) an assault through the Ardennes region of Belgium and Luxembourg designed to split the Allied troops in half by marching to Antwerp. The objective was to isolate the troops under Montgomery to the north from the rest of the Allied forces in France as well as Patton's army marching from the south. Hitler originally planned to launch his offensive in late November, but a combination of delays from his Generals and too-nice weather delayed the assault until December 16, 1944.

For the allies, the Ardennes front was the "Ghost Front" where soldiers went to get away from the real action and where new recruits learned the ropes on patrols will little chance for real confrontation. For over two months the Allies had mostly rested and stared at the other side and avoided conflict. The Ardennes front stretched from Echternach, Luxembourg in the south to Monschau, Germany in the north. Before daylight on December 16 the Germans opened with artillery fire and shortly thereafter infantry in white snow gear marched on the allied lines. Tanks followed the infantry through the ghost front, and it took the allies some time to realize that this was a general assault and not isolated incursions on the line.

The German offensive succeeded in pushing a bulge in the American line, pushing near Dinant and Namur on the Meuse River but running out of time, supply (mainly petrol) were eventually stopped by the Allied forces. The tide turned around Christmas 1944 but the fighting in the battle would continue through the end of January with significant casualties on both sides well after the battle was lost by the Germans.

This was a devastating battle for both sides - over 80,000 casualties for both armies with nearly 20,000 Americans killed. This was the largest pitched battle of the war for the Americans and the death toll surpassed any other engagement in the war.

From the train station in Liege we set off for the village of Monschau which marks the northern edge of the German assault. Almost on cue, snow started falling as we worked our way up the 2 lane highway through the hills to the Belgium / Germany border. It was Easter Sunday and the road was full of families driving into the hills for cross country skiing and other wintry fun.

Monschau was mostly spared in the battle - apparently General Model was fond of the historic latticed houses and wished to preserve them from destruction. This area was very active before the battle started with skirmishes occurring frequently in the area leading up to December 16. In the village of Hofen on the southern edge of Monschau we stopped at Gasthaus Schmiddem, a B&B nestled on the Rur river. This is where soldiers from the 395th Infantry of the 99th Infantry Division holed up to withstand the opening barrage of rockets and shelling that marked the start of the battle.

Moving south through along the ridge highway marking the border, we stopped at a national park in the Schnee Eifel (now called Schneifel, Schnee == snow) about 100 yards from the Wahlerscheid road junction. This became known as Heartbreak Crossroads - American troops of the 9th Infantry Regiment (the "Manchus") had been engaged in a staggering assault on this fortress for several days leading up to the start of the Bulge. They captured the crossroads only to lose it with the opening assault of the Bulge, but they significantly slowed the advance as a result. 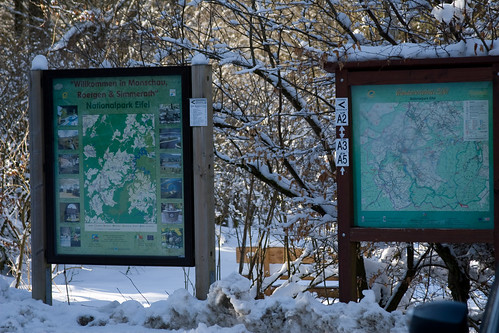 The crossroads today is little more than a west-bound junction into Belgium from the north-south highway in the Eifel. The Americans would finally retake this critical road junction in February 1945. 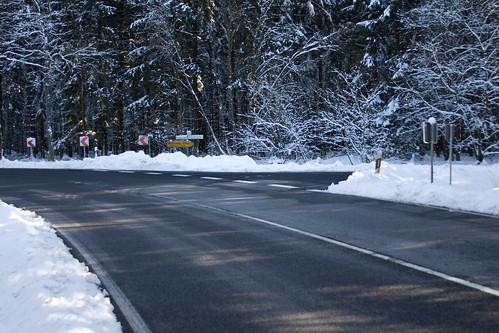 Next up was a stop in Hollerath to visit a local war memorial featuring a broken church bell found in the ruined church after the battle. One bunker in this village served as the forward command post of the 12th SS Hitlerjugend Panzer Division at the onset of the attack. 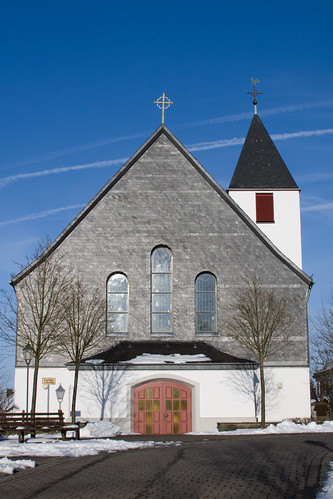 The weather was crisp and clear and the town was eerily quiet on this Easter Sunday. We entered the church as well and saw some beautiful modern stained glass. 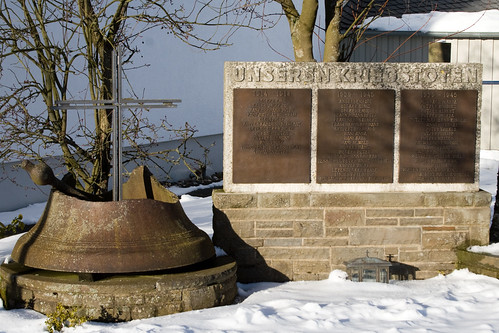 Our last stop in the Eifel was to a picnic area south of Hollerath and was our most dramatic visualization of what the terrain may have looked like during the war. This was the eastern-most point (the start) of Rollbahn (highway) A, the panzer assault route leading west through Krinkelt-Rocherath across the Elsenborn Ridge to the Meuse River. From where we parked we could stare into the forest line marking the Belgian border where American troops were positioned at the start of the battle. The road into the forest was nothing more than a dirt trail in 1944, and as you can see the dragon's teeth marking the Siegfried Line still remain in force. 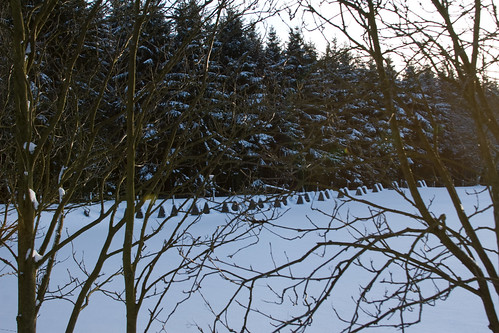 This was about all of the stopping I could cajole the group into for the day, so it was time to make the final scenic drive into La Roche en Ardennes, our home for the next three nights. 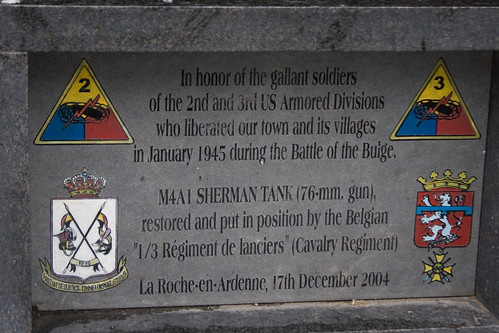 La Roche is probably most famous as one of the link-up points of the American and British forces towards the end of the battle shortly after the (re)liberation of La Roche in January 1945. There's a nice Sherman tank near the town center, along with an British Achilles tank destroyer perched above town looking down on the river. 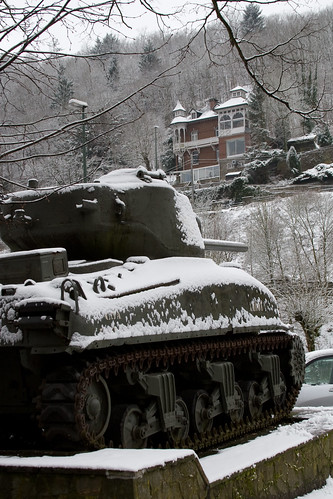