Jacob invited a friend over for some Magic: the Gathering action. After playing another prototype with Carey I joined in for some fun theme-deck action. I then forced To Court the King on the both of them with the claim "It's just like Magic, but with dice. And there's nothing to collect." 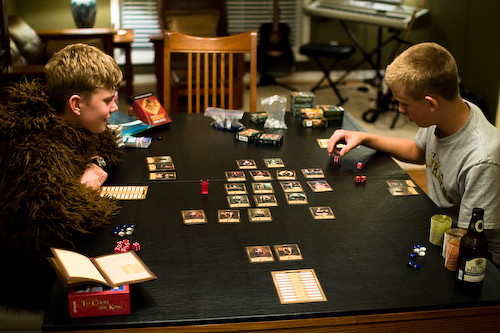 That was good enough for them (like I gave them a choice) and we got through most of a game before it was time to check out the candy loot from Matthew as he returned from begging. There seems to be some depth to the game as the choices on how and when to use the characters are non-obvious. Still, it seems very tactical which will be fine by me if we can play it consistently in 30 minutes. Jacob and Bigfoot seemed to both like it.