I played games for the first time in 3 months last week, a trend I will continue tonight as I make it to my first RipCityGamer session since July.

Carey came over in the afternoon to playtest one of his new designs, a supposed race game called Bridgetown Races. I say supposed because I wouldn't classify it as a racing game - it is more of a logistics or traveling salesman game. 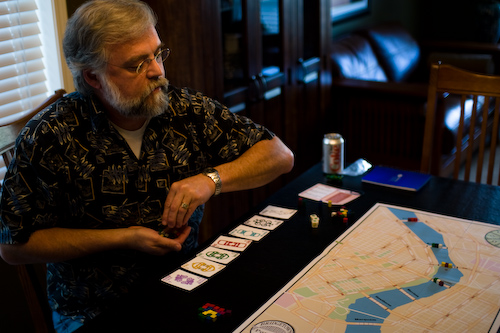 This was a fun experience and reminded me of what I like the most about publishing games - playtesting and collaborating on new designs. I can't design myself out of a box, but I sure can be critical when I need to and Carey was great about taking feedback and innovating on the spot. We played once with his current design then made some drastic changes and tried it again with good results. He's still polishing and enhancing as there's work to be done - the game needs a bit more arc to it the board spacing needs some work.

Ken and Brandon stopped by on Sunday (no baseball due to rain, something we were all hoping for this time around) for some overdue gaming. We haven't picked up our D&D campaign since early this year and we are all anxious to get some free weekend time to dive in again. We had limited time on Sunday so we elected to play Shadows Over Camelot. 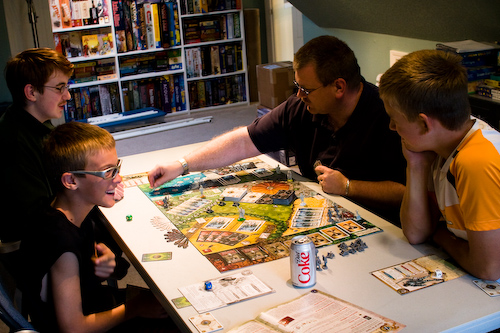 We had a good time but the finish was anti-climatic as we non-traitors fell asleep at the wheel and allowed 11 siege engines to accumulate at Camelot, making it easy for traitor Ken to finish us off. Just like that, game over 60 minutes into the game. Bah. At least it left us time to play another.

Iliad has been sitting on my un-played list since I acquired it in a math trade earlier this year so gave that a try. This is a fun (but a bit long) game reminiscent of Havoc and Condotierre. We had a great finish to the game, with a "Gorgon" battle coming up last and a great sudden death battle for the finish.

There was a clear king-maker opportunity at the end for me, especially if I took the chance to do some real analysis. I opted instead to just give Jacob the battle victory and see where the final results would fall out (Brandon was in the lead so letting him win would be a mistake) and Jacob did indeed turn out to be the victor. It was a fun finish to a fun game, though shortening it a bit might be nice. We played for about 90 minutes.

Tonight I'm off to Mike Dean's for our game group's regular Tuesday gaming session so I'll report on that soon.