Gaming sessions have been few and far between over the past 2 months. I looked at my game journal and noticed an entry on May 1 (my session at Mike's) and one play of Battleground: Fantasy Warfare with Jacob on May 15. Needless to say I was excited to host a few friends for gaming last night.

We had a special guest: Peter Drake from Lewis and Clark College. Peter is a professor of computer science there and will be using 24/7: the Game as a game to implement for a spring CS course next year. He is using agile development techniques (eXtreme Programming I believe) and wants to have periodic visits from a real onsite customer, so he reached out to Sunriver Games. Last night was a chance for him to meet the designer, get a copy of the game, and join us for some gaming.

I invested no time ahead of the session learning anything new (I'm itching to play Winds of Plunder) so I suggested the classic Union Pacific. Most of us have played the game many times, but we still managed to screw up the rules. We forgot to have each player secretly lay down a company share at the start of the game. When the first scoring round came up, nobody had any shares out so nobody scored. Probably not a big deal. 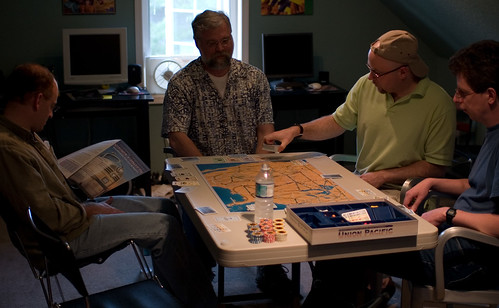 I always enjoy this game, but lately I wonder if I should just be playing Ticket to Ride (or one of the expansions) instead. There's less tension in UP than TtR I think, and it can become all too clear who is going to win as you hit the second to last scoring round.

Peter wanted to learn how to play 24/7 so Carey taught the game and we played a four-player partnership game. Dave and I absolutely crushed Carey and Peter, nearly doubling their score. There's a decent amount of luck-of-the-draw in the game but I always enjoy it. We had some nice discussions about how to best implement an artificial intelligence (AI) for the game, something Peter will likely include in his class. 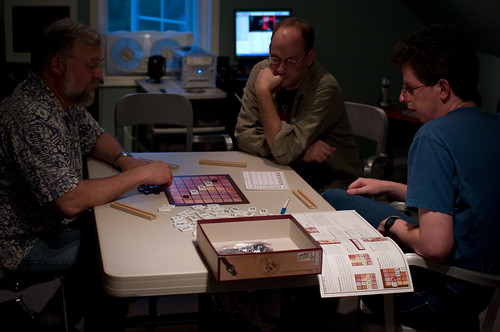 We completed the evening with a game of Loco!, the Knizia card game. I played this once before and enjoyed it then, but playing it a second time makes me realize just how chaotic the game is. We all struggled with choices on what cards to play - either we just don't get the game, or there really aren't good approaches to the game with four players. I think I would have enjoyed a game of Tichu or Die Sieben Siegal more.