With Jacob snowshoeing / backpacking up on Mt Hood, and Julie/Matthew driving halfway to the coast to transport a friend, I rang up Ken to see if he was up for some 2-player gaming. He was open to just about anything so I setup Combat Commander: Europe, scenario 5. This is the "saving Castle Wolfenstein" scenario or something similar - the Germans are defending a chateau in Belgium and the Americans are storming the castle. Not unlike scenario 2 that Jacob and I played recently. I like "unbalanced" scenarios like this more than the 1st scenario where both sides are on a generic recon mission. Of course they aren't really unbalanced because of the initial conditions - in fact, I'm finding the scenarios so far to be incredibly well balance. Either luck, coincidence, or they did a fair amount of scenario playtesting. 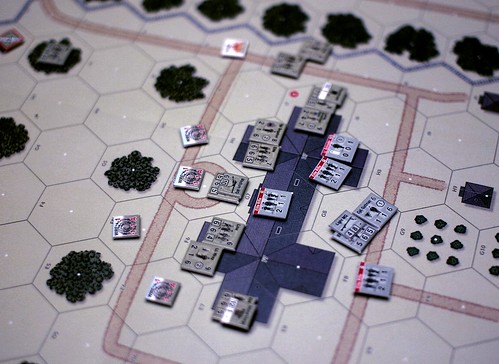 This was a marathon game, lasting nearly 5 hours with very little teaching and downtime involved. I used a selective disclosure method of teaching the game which works quite well when you have an accommodating partner. Ken and I are similar in that we both prefer not to grok the whole game at the start and just get into it. We didn't bother discussing artillery or ordinance until we got cards that forced me to teach him.

The game play was incredibly tense - the best I've experienced so far. I spent all of the game in the 22-27 VP range until Ken took over the chateau (worth at least 15 points), which gave me a very slight 3-4 point margin. The problem was I was fast approaching my casualty surrender limit. My other problem was that I had a secret 3VP objective of, you guessed it, the very same chateau which made my margin even slimmer.

We managed to trigger two separate sudden death trigger tests, but neither one played out to my favor. So it became a waiting game to see if another time trigger would happen or if Ken would draw an advance card to wipe out my surrender unit. Well, it didn't and he did, so game over. I'm glad Ken's first try at this game was so involved and rewarding - I suspect he'll want to come back for more. Prediction: CC:E and CC:A are going to be my two most played games in 2007.