Jacob and I have been on a roll lately, playing Combat Commander: Europe twice and Command & Colors: Ancients three times over the past 2 weeks. I'm most excited about CC:E, so let's talk about that first.

Coming on the heels of trying out ASL SK#1, CC:E hit the sweet spot the game Jacob and I were looking for. The card-driven nature of the game is the right solution to the ASL problem of "oh my there are so many choices I might have... how do I decide?" This game is nowhere near the ease of play as C&C Ancients or Memoir '44 - this is a real war game folks! It has counters with little numbers on them, challenging timing rules, and concepts for routing and rallying similar to ASL.

Still, we both found the game very approachable and fast-paced if not short. Our games are averaging around 2 hours 30 minutes right now, though we may get it down to 2 hours with repeated play. We started with the Fat Lipki first scenario, with Jacob playing the Germans and me the Russians. 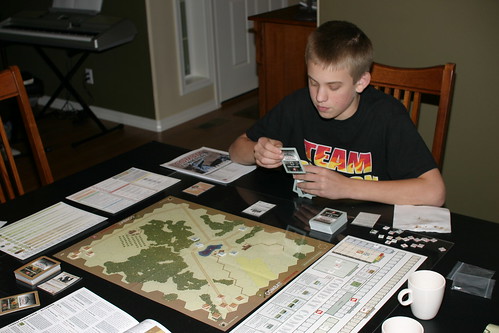 This scenario has a small number of units with both sides on recon. One thing I really like about the game is the variable / hidden victory objectives which should greatly enhance replayability. This time around we both had the main building (objective 5) in the middle of the map as our secret objective so that's where all the action was. I snuck out a marginal victory of 3 points by surrounding Jacob from the woods across the road. I also brought some units around the back side near his original starting point, which turned out to be a smart move as he marched a unit off my side of the board (that scores VPs for him) then brought him back in the next turn on his side. I don't quite see how that fits the simulation, but it is an interesting game mechanic.

Our second game was scenario 2, with the Americans and Germans fighting it out in the hedgerows. This really is a hopeless scenario for the Germans, but the starting conditions are balanced such that it is very playable. We found this scenario to be much more engaging, especially because the units involved gave us more options from the cards (radio and artillery for Jacob as the Americans and some ordinance for the Germans). This was another close game but in the end Jacob was able to overrun my position and get the requisite victory points. I'm rating this a 9 after two plays. 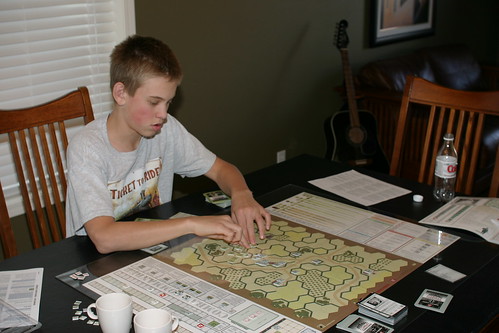 Jacob and I are getting to be pros at C&C: Ancients, with most games finishing in less than 40 minutes. Friday night we played the Lake Trasimenus scenario, with Jacob playing the Carthaginians and me the Romans. This is a tough one for the Romans to win I think - or at least that's going to be my ongoing defense as I can't seem to beat Jacob in this game. He won 6-3.

Today we played back-to-back scenarios of Himera from the 1st expansion. This scenario pits the Carthaginians against Syracuse, and has a great setup: a Syracuse leader and cavalry sneak into the Carthaginian camp then proceed to wreak havoc. Both of our games turned out to be decent simulations, with the Carthaginian camp getting nearly wiped out in both cases (I played Carthage both times) and solid counter-attacks from the right in both cases. The first game was over fast, with Jacob taking all 6 flags before I got my first. I made a few serious tactical errors, attacking without room for retreat when I could have easily left myself some buffer. On our second go-around I fared much better, losing 6-5. I think I would have won had I delayed a counter-attack on the right and instead escaped with Hamilcar and the calvary from the camp on the left.

The three scenarios we played lasted 35, 30, and 40 minutes. Setup time is down to about 10 minutes.

So the real question is this: because we're having so much fun with C&C: Ancients, should I even consider getting BattleLore?