Jacob and I are starting to get a bit hooked on Command & Colors: Ancients. We played a game Thursday night then brought it out again this afternoon. It sure is nice to play a wargame multiple times in a row like this - I must remember that and try it more often. Amazing how the rules stick that way.

On Thursday we played the Castulo, with Jacob playing the Romans and me the Carthaginians. This is a break-out scenario where the Roman player is trying to escape off the Carthaginian side of the board. It also involves a bit of terrain which was a first for me. We did fumble with the rules a bit, especially the benefits leaders bring (they must be attached to give the morale boost on ignoring flags, but an adjacent leader can give the attack bonus). This was a decent first scenario for Jacob as it doesn't involve the elephants; elephants aren't that complex, but for a simple game they probably do introduce the most variable complexity. The game was very tight with Jacob threatening to run off two cavalry units to seal the victory, but I was able to force back his cavalry with a well played attack and momentum advance attack. Still, my position was too weak to survive as he subsequently won the required flags by eliminating a weak stray unit.

Today we tried out the Ilipa scenario, the same one I played with Eric Landes a few months back. This brings elephants into the mix (or, as we prefer to say, Stampy) and is more of a wide open smack-down with a healthy mix of cavalry, medium, and heavy units. 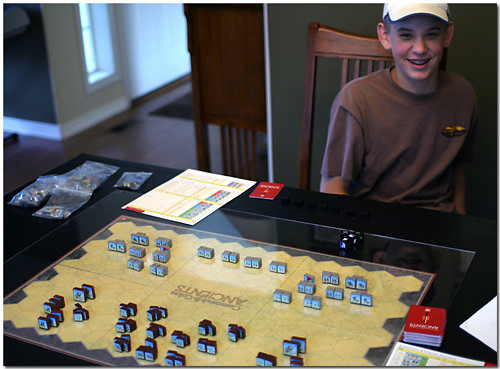 Things did not start at well for me, the Carthaginians. Before I even played my first command card Jacob eliminated my elephant unit on the right flank. Those pesky spear chuckers took him out with successive single-die red square rolls. And I had so much planned for those two. Sniff. 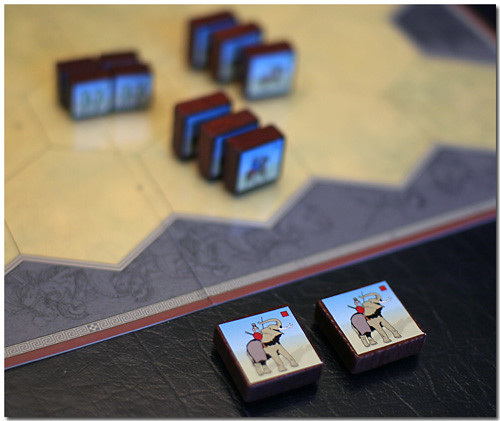 This was the closest game of C&C I've played yet. I surged ahead with six flags to Jacob's four - seven are needed for victory. Jacob caught up with a well played behind-the-lines penetration, but he left a stray unit that I was able to take out with a ranged fire to win 7-6.

I also spent about 3 hours putting stickers on my blocks for the 1st expansion while watching the Colts game. As I finished the Greek blocks and started on the Eastern Kingdom blocks, I realized I had used the wrong color of blocks for the Greeks. Oops. Too late to move stickers too - they are (thankfully) designed to stick tight. So I checked the block count to see how much damage I had done. I was fine with the infantry, leader/chariot, and elephant blocks, but there are quite a few more blocks for cavalry for the EK than for the Greeks. I checked the scenarios to figure out what configuration would allow me to play the most, and assembled what I could muster out of the remaining blue blocks. Not satisfied, I searched Julie's craft drawer and found some blue paint that is more than close enough to work then proceeded to paint 9 extra natural blocks to turn them into blue blocks. This would not work for a Columbia-style block game as it would defeat fog of war, but for C&C this is not problem. This could have been a much bigger disaster if the two sides weren't pretty balanced to start with.