If you follow this weblog (and the now defunct Gathering of Engineers blog) you know that I had a New Years resolution to play through my current owned but unplayed collection of games. This lead to a tracking and execution model of burning down the list. 2006 is now behind me and I'll give myself a qualified success score on the project. I finished the year with 2 unplayed games in my collection (minus games I've moved to my trade/sell list).

In case you want to track my updates through the year, here's a summary: 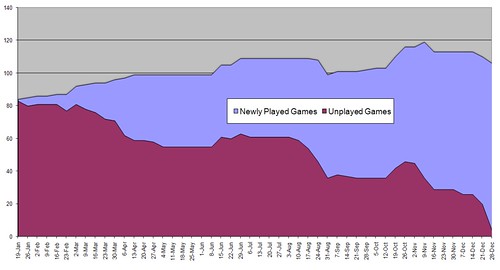 Thanks to the help of a dedicated set of friends and family, I was able to close out the year by knocking 14 games off the list in less than 48 hours. These weren't just little card games either - we played some meaty games like Imperial, Shogun, and El Caballero. Here's a brief wrap-up of each game played with some commentary:

The running commentary in my game group (at least with KC and Rita) is how good this game is and how bad the dice game is. Color me random, but I think I like the dice game a bit more. At least this game doesn't have a simultaneous selection mechanism to choose what room to go to - that would drop it down to a 2 or 3 rating for me.

Employee of the Month

It was hard to get past some of the graphical design / human factors issues with this game, but it was a decent diversion.

Basically Clue without a board, this one dragged on too long for us to finish. There are simply too many permutations to track and everyone found it to be too much work and too little fun. Plus, I don't get the inclusion of a roll-the-die-and-you-might-lose-a-turn mechanic.

I was tired, distracted, and not really paying attention to this game but I still managed to win. That can't be a good thing, but I'll be willing to try this one again.

One of the highlights of the weekend for me. I love it and am now wondering if I should trade away my pasted-up Wallenstein copy.

One of the surprises of the weekend for me, despite KC's frustration is the middle / 3rd player in what really should be a 2 OR 4 player game, not a 2-4 player game. I think there's a fun little chess variant here and I look forward to trying it with my chess club.

Socks in the City

Not much to say here - this was in the category of "OK, let's get this out and be done with it". Thanks KC for teaching and bearing with me on the play. This will go to the trade/giveaway pile.

I found this in shrink at a Goodwill and it will be a nice donation to the school. I don't see any reason to keep this if you already own Amazing Labyrinth, which I do like.

I somehow talked Julie into playing this with me, and we both came away with the same impression. Boring, tedious to lookup the abilities in external charts, and mostly just a stand around and attack game.

Ken and I played this on Sunday morning and we both loved the experience. It played in under 2 hours and we think we could get it down to an hour now that we understand the game. I expect to see this come out quite a bit once Jacob and I give it another try. Julie might enjoy it too.

I did not expect to like this game but came away very satisfied. It looks and feels similar to Tongiaki but it is heavier with less randomness/chaos and some interesting mechanics. It did tend to regress into min-maxing at the end which dragged out the final stage of the game. 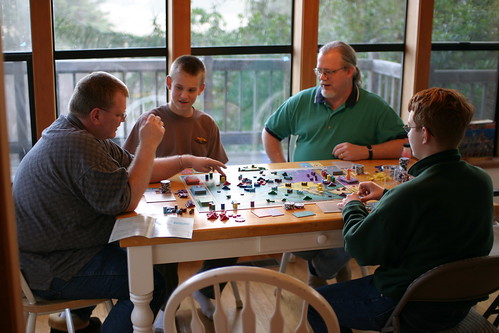 I was able to sit out for an hour of this 2:15 length game because I lost control of the UK to my own son Jacob. I still managed to beat Ken and KC (hah!) but Brandon and Jacob ruled the day and finished 1-2. I'll likely be writing more about this well designed war/economic game hybrid.

It took a while for me to get this game going - the rules are a bit convoluted and I need to write some play tips on the geek to help others. Still, this is a decent stock / train game played with cards that I'm going to keep and bring out some more this year. We played in about 35 minutes. The main question we have is how controllable the game is with bad card draws.

We played the shorter Karatino game... what a dog. I suppose I'll try the Crazy Diamond game before letting this one loose, but I don't have high hopes.

This was just too long and too complicated to consider bringing out over the weekend. I really don't know what to expect with this game but given my groups fondness for 18xx games of late, maybe it won't be too hard to get it out.

We skipped this primarily because I don't have the English pasteups yet for the cards - just a reference guide.

Games Moved to the Trade Pile

History of the World

These are both "old" versions of the games, and I just don't think they'll get out enough in my group or family.

I didn't know how language dependent this game was when I picked it up on sale during a trip through Germany last year.

This was an add-on to my Indonesia purchase at Essen 2005, and I should have skipped it.

This process had the desired effect - refocusing my attention on my collection for playability and not just for collecting. I'm committed to keeping the number of games in my collection approximately flat and I'd like to finish each year with as close to zero unplayed games as possible. The end result is going to mean fewer purchased games in 2007 and focusing on playing the ones I have.