At Origins earlier this summer Tom Vasel was kind enough to give me a copy of Gemblo Lite, the smaller version of the Korean game Gemblo. The publisher is trying to increase awareness of the game by getting world-famous game reviewers and bloggers to talk it up. Tom apparently couldn’t find anyone that met those criteria, so he handed me a copy.

A couple of weeks ago Jacob, Matthew, and I sat down to give it a try. At first we assumed it would play just like Blokus, but there's a subtle difference: in Gemblo, you can play off of any edge of a piece, whereas in Blokus you can only play off the ends. Other than that, the games are very similar though Gemblo does a much better job of dealing with variable player numbers. 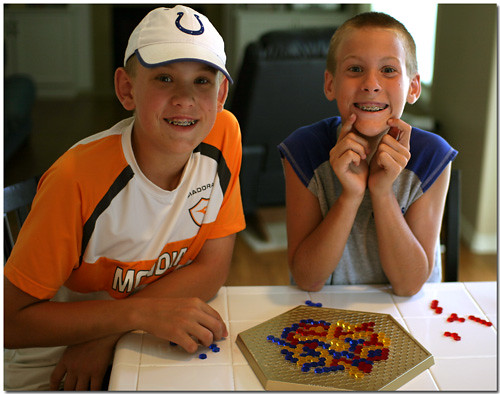 I can't comment on the differences between the light version and the original big version, though I do like the fact that the box fits very nicely on my standard gaming bookshelf. The components in this version are nice, with good contrast between the different player colors and an easy-to-use board that shows what to use for different numbers of players. Our game played in about 30 minutes, and I suspect we could play in 20 now that we know how to play.

If you like Blokus, you'll probably like Gemblo but... I'm not sure why you would need both as the games are more alike than different. One consideration is this: Gemblo Light is smaller and supports up to four players, while the smaller version of Blokus (Blokus Duo / Travel Blokus) only supports two. So if you want a smaller box game in this genre, Gemblo Light is the way to go.