A rarity - we got in some family gaming this weekend! After spending about 24 total hours on baseball fields this weekend (local tournament for both boys), I got some relief Sunday afternoon and managed to sit down and watch the US Open and play a game. We pulled out a new acquisition - Winner's Circle, the Face2Face games remake of Royal Turf.

Julie and Matthew had played this one before, but it was new to me and quite a good game. We played with the default rules where bets are open but only played two races. 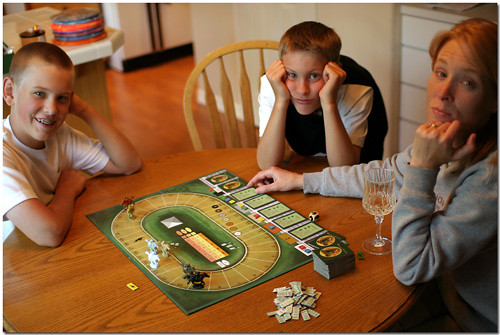 The components are decent - I love the horses and the cards and board are decent quality, though my board had a printing smudge on one corner. My only complaint, which is quite significant, is that it is quite hard to tell which horse matches which starting slot for the 3-4 horses that are close to a neutral grey. I think I have some mild color blindess, but even Julie and the boys had problems at times figuring out which horse on the track matched which card. Face2Face should have placed a number or some other matching / distinguishing mark on the horse to help keep everything straight - you shouldn't have to work this hard when playing a game! 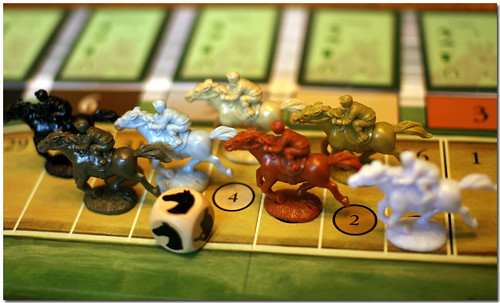 I suspect the hidden bet variant (including the zero bet chit) makes for a better game.