I first saw Axis & Allies Miniatures at GenCon 2005 and after hearing so-so playtest reports from Jacob and Matthew I decided to skip it.  Besides, it was near impossible to buy starter packs after the second day of the convention.

Last weekend KC, Rita, and I took a trip down to Medford / Ashland Oregon to spend some time with Jeff Deboer and the Funagain team.  We had a blast playing games (and prototypes), talking some business, and visiting the Funagain retail store.  I had a bit too much fun, walking away with about 8 or 9 purchased games.  On an impulse I picked up a starter and one booster of Axis & Allies Miniatures, and with Jacob eager to try it tonight we set out to play a quick scenario. He stayed up later than usual but with only 1.5 days of school left, no big deal. 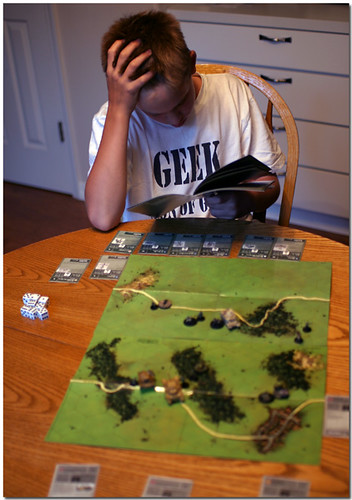 We each chose 83 point armies.  Why 83?  Well, that’s all the armies the Axis could muster up with what I purchased.  As it was, I played the Axis with a blend of Germans, Japanese, and Romanians.  Jacob played the US, Brits, and Chinese.  So much for historic realism.  Guess I need to go out and buy more boosters.  Do you think that’s what WOTC wants me to do?

The game was quite fun – very simplistic combat system that I think we got mostly right.  There are no complex timing rules as damage is deferred to a casualty phase, though I suspect things might get dicey with some of the special abilities like most collectible games (no evidence to back that up yet).

Our armies were knocked down quickly – we each lost three of our starting 8 units in the first turn, and were down to 2 or 3 units each by the end of the second.  This was partly due to the fact that we both wanted to dive into combat to see what the game was about.  We still aren’t clear about the disruption / damage rules, but I’m sure I’ll be able to find some clarifications online.

I’m wondering if it would be worthwhile to pick up a set of commons and uncommons on eBay to get decent armies.  It looks like this can be done pretty cheaply (about $30 total).