Hereafter referred to as just "D&D", Dungeons and Dragons 3.5 is the most recent version of the 30-years-and-running juggernaut roleplaying game from Wizards of the Coast. This was really the game that started it all for me back in the late 70s when as a 6th grader I was given the Basic D&D (2nd ed) set and taught myself, ensnaring several close friends in the process. From there we learned Advanced D&D (I still remember getting the Dungeon Masters Guide for Christmas, probably around 1980) and were cross-sold by our local game store into the multitude of Avalon Hill wargame titles. I continued to play through high school and a wee bit in college, finding time to attend GenCon after my freshman year of college (and a summer spent as a cook and drug store clerk in Aspen). I also played the original Star Wars RPG in college (Mr. Ladewig, are you listening?).

I introduced basic roleplaying to Jacob and Matthew at an early age, probably 8 (Jacob) / 6 (Matthew). D&D and Star Wars RPG are probably the only games both boys will play any time, anywhere, with no hesitation. They love the sense of adventure and make believe and the development aspect of their characters. They approach the game very differently: Jacob devours the books, learning about new classes and special tricks he might employ with his character, while Matthew loves to just go along for the ride. This isn't just an age thing, as Jacob was reading the books when he was younger than Matthew.

Ken, Brandon, Jacob, Matthew, and I have had a Forgotten Realms campaign going on for what is probably close to two years now. I'm the dungeon master and have assembled a series of one-shot adventures into a completely illogical amalgamation of events for the four characters, but we still have a good time. Emphasis is on light story and heavy action, though I'm starting to sense that the boys are getting more interested in story and character development.

Given our busy schedules, we are lucky to get together once a month to play. I suggested last December that we carve out a weekend to go out to the coast and play through a scenario in one marathon session. We didn't quite get the whole weekend, but last Saturday afternoon we drove out for about 24 hours of gaming, returning Sunday evening. I don't have the time to write my own adventures, so I was running an off-the-shelf adventure from Goodman Games called Shadows in Freeport. I love the tag-line from their Dungeon Crawl Classics line of modules:

Remember the good old days, when adventures were underground, NPCs were there to be killed, and the finale of every dungeon was the dragon on the 20th level? Those days are back. Dungeon Crawl Classics don't waste your time with long-winded speeches, weird campaign settings, or NPCs who aren't meant to be killed. Each adventure is 100% good, solid dungeon crawl, with the monsters you know, the traps you fear, and the secret doors you know are there somewhere.

True to the brand, this adventure was a crawl in the classic sense - no negotiating with NPCs to determine motive and only a single puzzle to solve. The rest of the adventure involved killing unread and various demons. 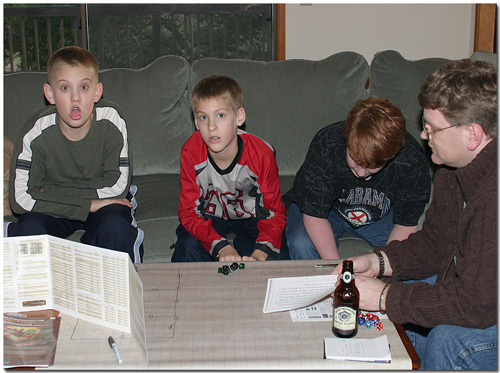 The theme of the adventure was a bit of a challenge for Matthew - the theme was a bit on the scary side for him what with the ghosts and spectres and 16 different flavors of demons. He's fine but definitely needed to sleep with me on Saturday night.

Most of the techniques I used to run the game I've learned from other DMs at RPGA sessions at conventions. I use a square grid mat with wet erase markers (four colors) and a wide assortment of miniatures (yes, that is a Chewbacca wookie you see below). I have miniatures from when I first played D&D, minis we've painted at conventions, and a wide range of D&D miniatures (plastic pre-painted) that I simply adore for running campaigns. I've never played the D&D minis game but they sure work for roleplaying. 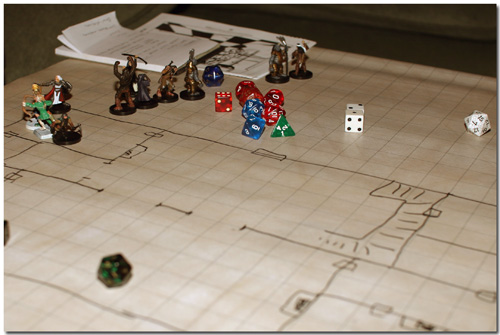 We have a pretty good handle on the rules but I play infrequently enough that I spend way too much time referring to manuals during sessions. Fortunately Ken, Brandon, and Jacob are all at least as knowledgeable as I so provide much in-game help to resolve unknown issues.

The good news - everyone survived (there were some very challenging encounters for these guys!) and we now have a party of 9th and 10th level characters ready for their next challenge. Ken is preparing to run The Shackled City in a new campaign, which will be a nice change. We need to find the right transition to switch in to the new campaign with new 1st level characters.

While Ken and I prepared dinner Saturday night, the kids worked in a couple other games. We keep a carom board out at the coast, and the boys played a simple flicking game similar to crokinole. 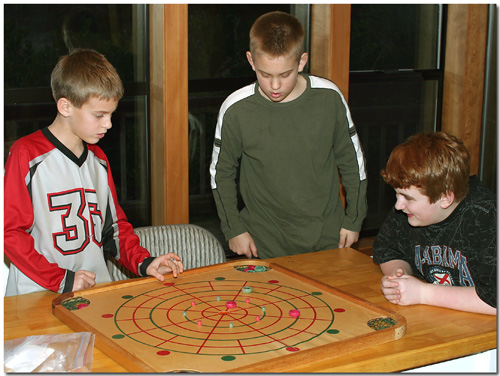 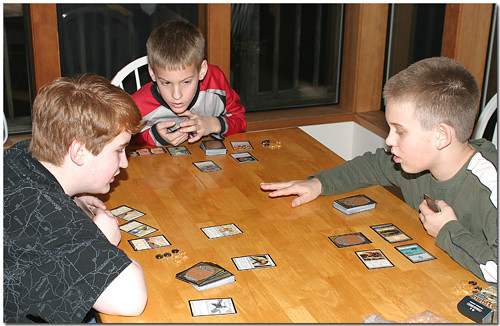 Hopefully this gives some insight into our D20 roleplaying life. I'm not going to turn this into an RPG session blog, so don't expect to see too much here unless I try out new systems or play at conventions.