I took advantage of a free evening without the family here to invite over the crew for an unscheduled game night at my house. George and Mike responded and we dove into a game of Railroad Tycoon at about 7:40pm.

The game started with Mike concentrating in the northeast with a small bit of competition from me to the south, and George going it alone in the midwest around Chicago. I managed to pick up some early card bonuses that put me in good shape income-wise, allowing me to only take out three shares in the game. Mike got some similar early payouts from deliveries and remained close behind me for the remainder of the game. George's choice to work out of Chicago may have cost him too much in debt, but he certainly faced no competition there. 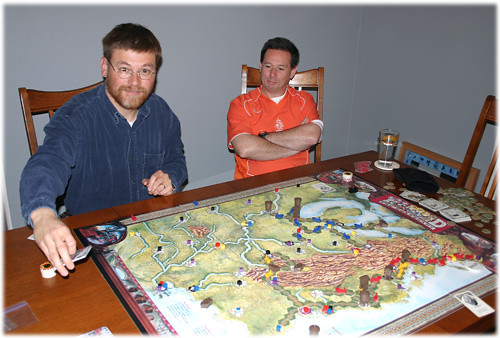 Things got very interesting around mid-game as I tried to ensure I would get my 6 point bonus for the greatest number of links. Mike was going for the longest single route which indirectly put him in competition with me and put my bonus in jeopardy. I managed to get some breathing room allowing me to build out enough links to surpass him by one. In the end I pulled out the victory with Mike about 5-7 points behind and George a distant third.

I remain bullish on this game but wonder if the board is too spacious as is for three players. There always seems to be one player out on his own and it is easy to avoid conflict. Still, it was fun and we finished in about 1 hour 20 minutes - an excellent time/fun ratio.

George only had about 30 minutes after tycoon, so we decided to try out 10 Days in the USA. This is a fun, light little game designed by Moon and Weissblum that should come out more frequently at home and at school. Maybe too light for serious gamers, but there's a nice bit of tension as players try to complete their routes. 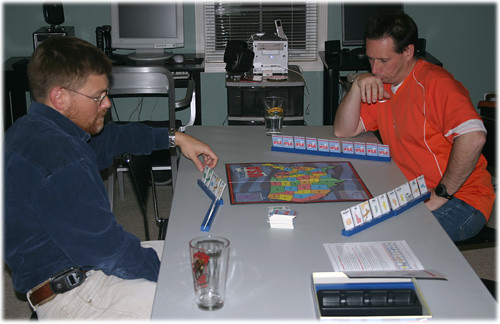 Given the choice I would still rather play Transamerica, a similar game but with a bit more player interaction and strategy.