Thursday evening was the official start of Christmas vacation for me. I made the 2 hour drive out the coast yesterday afternoon and arrived to find a houseful of family and friends.

This is a great crowd to try out some gaming with, and folks jumped at the chance to play Union Pacific. I had to refresh myself on the rules but we were in full swing within about 15 minutes. Geoff took a strategy of diversified ownership of about 6-7 lines and managed to finish 1st or 2nd in all of his holdings throughout the first two scorings, putting him squarely in the lead with me in second place. Karen and I shared / alternated ownership of a few lines and held our own, but in the end Geoff pulled off the victory. 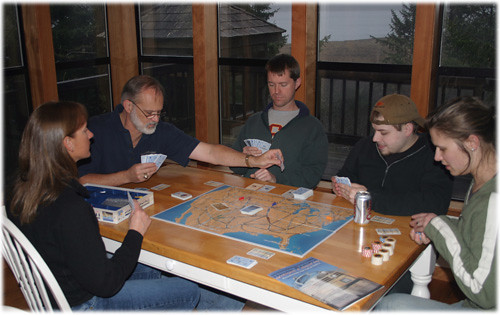 Next it was time to bring out some of my ancient Magic: the Gathering decks and have a three-way match with Jacob and Matthew. Jacob played a green growth / enchantment / regeneration deck that was too slow to get started - he was shy creatures throughout the game. Matthew played our favorite deck, a black/white denial deck with a healthy dose of Hypnotic Specters, Mindtwists, and some big flying creatures like the Serra Angel and Sengir Vampire. I played a white weenie deck with a bunch of banding / first strike white creatures, and a small dose of red for direct damage.

Matthew played his deck well and managed to get out the angel and vampire, making short work of Jacob and me.

We then got a group of six to play some Time's Up, easily my favorite party game right now. Teams were Julie/Karen, Dave/Mike, and Chris/Geoff. Geoff and I had a good thing going, maintaining a solid lead into the final round. We slowed down a bit as we played the final no-words round but held off the charge from Julie and Karen to pull out the victory. 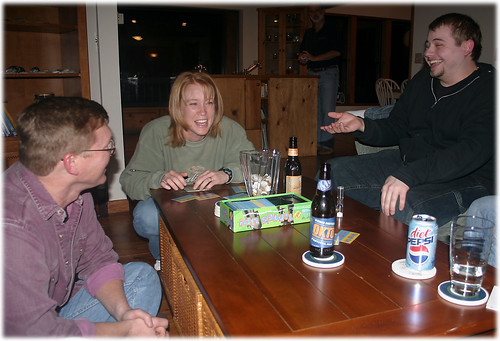 Finally, we rounded up the whole crowd for a game of Wits and Wagers, the new party game from Eagle and North Star Games. I plan to post a complete review next week, but suffice it to say that everyone had a blast and there was much laughter and groaning. Average rating from everyone was about 7-8. A good sign was everyone asking to play a second game immediately after the first. 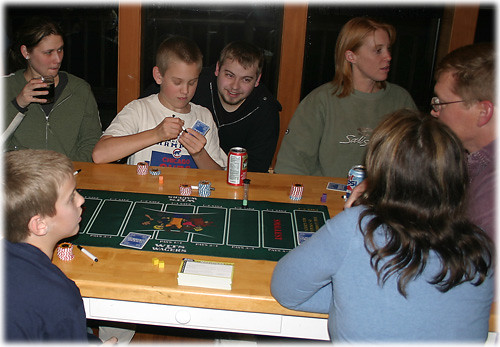