For my first Essen Spiel report I thought I'd focus on the Sunriver Games booth. This was such a learning experience for us rank amateurs, but I think we pulled it off with very few snafus.

Julie, the boys, and I arrived in Essen just after noon on Tuesday, October 11. We checked into our room at the Hotel Arosa and started to notice some other gamer folks hanging around the hotel, including Lorna, Doug, and Mimi. After grabbing a bite to eat, we walked over to the Messe so that I could check out the booth and see if our rented furniture had arrived. 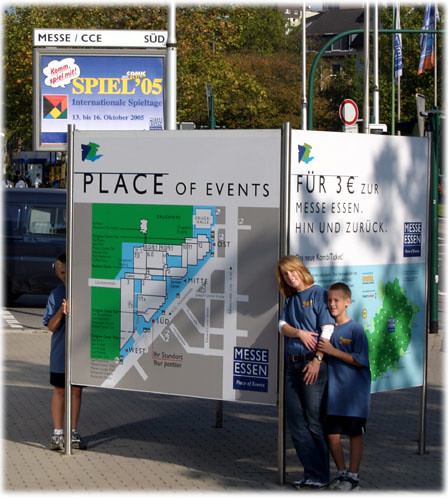 It was a bit strange finding my way into the hall - I figured one of the main doors would be open to those with exhibitor passes. I finally approached the security guard at the drive-in gate near the south entrance, showed him my pass, and he let me through. I was surprised at how little had been setup yet - most notable was the Settlers of Catan Bus, but very few of the smaller exhibitor booths showed signs of any action yet. 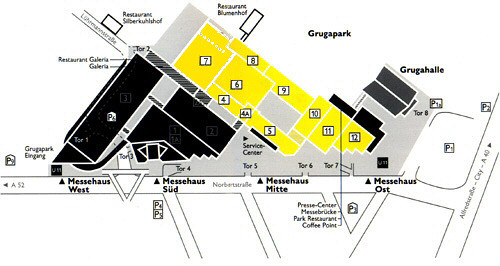 I quickly found the way to our booth (4-52) but was slightly disappointed to see no furniture there. I was stumped about how to resolve this, so I wandered around for a while looking for someone official. Nobody looked official. The most common site was folks drinking beer while constructing booths. 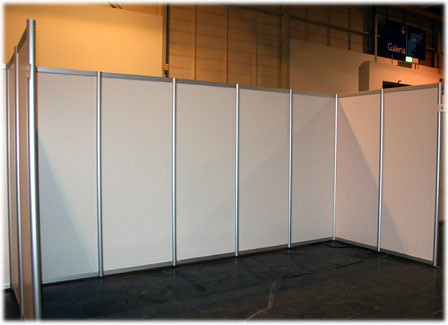 Eventually I referred to my layout map and discovered the service center over by Hall 5. Inside the center I found a very helpful woman who noted my request for furniture, confirmed my reservation, and spent some time on the phone with someone. About five minutes later she told me the furniture would be there within an hour. I wasn't going to setup Tuesday anyway, so it was good to know it would be in place for setup on Wednesday morning.

Wednesday morning we used our rental car to drop off all of the Havoc product. You can drive a car into the parking setup area if you have an exhibitor pass and a 50 euro deposit, which you get back as long as you leave within an hour. We hauled our goods the short trip through hall 5, through the 4A hallway, then to our booth in hall 4. Still no furniture. I walked back to the service center and they were surprised the furniture wasn't there, got on the phone, and indicated that perhaps it was left at the wrong booth and that they would fix it promptly. By the time I returned to the booth, a mover was carting our tables to our booth - they were sitting just behind our booth at another (4-62 I think).

Booth setup took very little time as we didn't have much to do. The biggest challenge was cutting down our fabric table covers to fit the tables. In hindsight we wish we had brought a larger hanging tarp or cloth to drape from the booth wall. To this we could have attached banners, price information, etc. without risk of damaging the walls. As it was, we taped them to the booth walls but had a hard time getting the residue off at the end.

KC and I took a break from setup to attend the press event. There were definitely some lessons learned here. You need to let the Spiel folks that (1) you have a new product you are releasing at Essen, and (2) register to show that product at the press event. This would have allowed us to setup a small table on Tuesday or Wednesday morning with our goods and have a formal presence at the event. As it was, we lurked, passed out cards pointing to our booth, and left some press flyers for folks to take (they were all taken within about 15 minutes). So we did OK, but lesson learned for next year.

We stayed around the hall till early evening as we had a decent amount of traffic without the show even being open - we probably sold 10-20 copies of the game on Wed afternoon. It was also a chance to checkout the used game vendors in hall 4 and see if there were any good deals.

Thursday morning presented a few logistics issues as we tried to coordinate pass purchases and get as many of our demo team in as early as possible. I was able to buy three more exhibitor passes and hand those out, but there was no easy way to buy 4-day passes for general admission ahead of time. Things worked out fine despite the huge crowds on Thursday morning. By 10:30am our demos were in full swing. 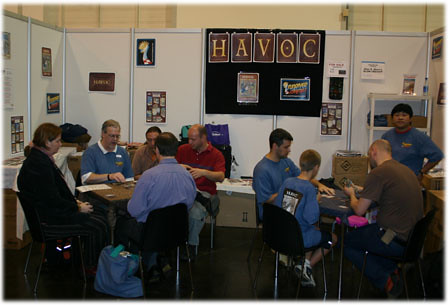 We sold about 80 of our 310 games on the first day, which was a big surprise. We extrapolated this out with some projected growth and though we might sell out as early as Saturday evening. Thursday would turn out to be our best day, which I think is indication of some of the pre-show buzz we worked up and the niche attraction of Havoc: the Hundred Years War. We would do reasonably well with walk-up sales, but due to the remote nature of our booth most folks that came by were looking for us.

We had a number of "celebrities" come by the booth. Mik Svellov… 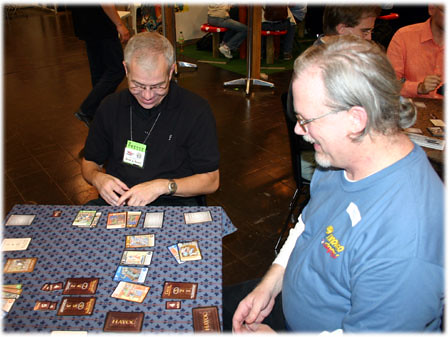 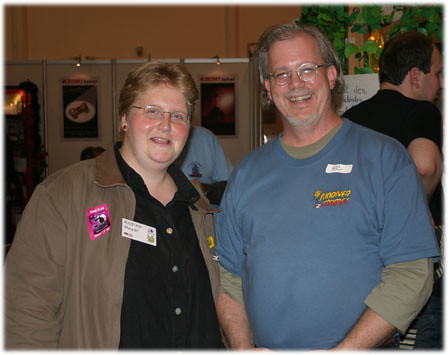 and Derk Solko came by and interviewed Jacob and Julie. 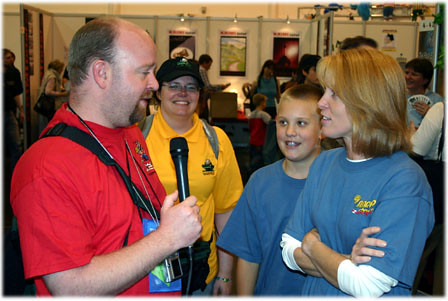 KC, Julie, Jacob, and I would have been overwhelmed giving demos were it not for the help of our demo assistants. Doug, Mimi, Lorna (all pictured below), Mike, Richard, and Ben: thanks for your time and dedication to making this event work. Ben and Mike both knocked our socks off by giving demos in German. I think Mike even surprised himself. 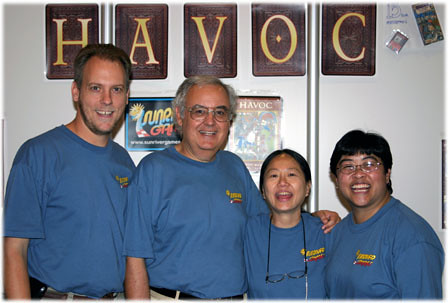 Cleanup on Sunday evening was more about getting a TON of boxes ready to ship back with Funagain than actually cleaning up our booth, though we did need to expend some serious energy cleaning the booth walls of residue. We wrapped up by around 7:15 and worked our way back to the hotel for a final evening of gaming. 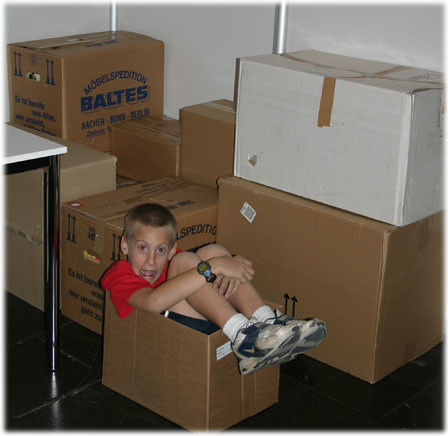 Well, that about wraps it up. The event was a great success on so many levels, new friendships were forged, and we met our objectives with Havoc. We are already planning for our trip next year, and if things go well we might even have a booth again with another game to sell. 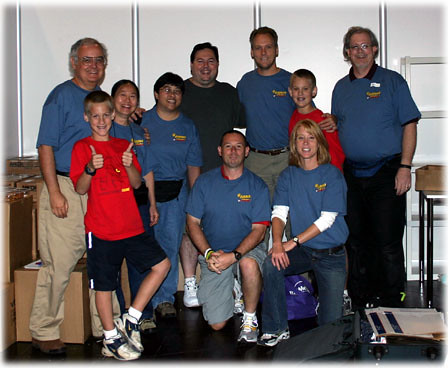