It was my turn to host a Rip City game night. My travel schedule has forced me to bow out of several of the last events and have someone else host in my place, so it was nice to finally have things work out. We had a decent crowd of seven tonight.

Ken showed up a bit early so he, Matthew, and I tried out a round of Drive, the card game from SimplyFun for 2-4 players. I never seem to get to play a full game of this because I'm always on my way to somewhere or something else. It is a fun, easy to learn, light card game that seems to work just as well with 2 or 3 players. Haven't tried it with four yet. 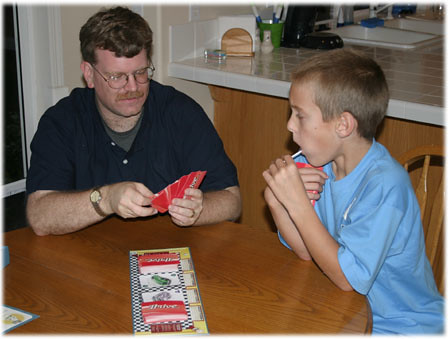 Matthew fed me too many nice cards so I managed to win the hand easily. Ken says he'd rather sit to the left of Matthew next game.

The rest of the crowd starting arriving promptly at 7pm. Caylus was the universal choice for tonight, so Mike brought along his copy so we could run two games concurrently. We opted to squeeze both games onto our dining room table to allow Mike and I to teach it together to everyone. Well, I taught it verbally while Mike mimicked my sample plays and pantomimed some of the verbal commentary. Quite amusing. 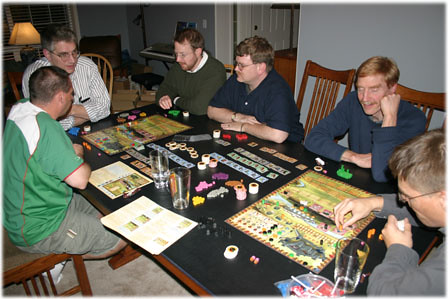 I mentioned before that I enjoyed Caylus but had some concerns about a runaway leader problem. I felt much better about this playing, partly because I won (!), but mostly because I'm beginning to think the game justly rewards solid play. I was much more prepared in this game and I think my adaptive strategy paid off. Jim struggled with the rules, while George played a solid game and would likely give me a much better fight in a second playing.

I tried to play contrarian, avoiding the castle when I suspected others would go there and getting some early buildings out. Going to the castle when you can build at least two sections seems to be a great way to economize on turns (I managed to build three at once in the second scoring phase). I only made one minor planning error in the game - you've got to pay attention to your resources and plot out your move. This becomes especially important as the number of options grows.

We started the instruction around 7:20pm and the game at 7:50 or 7:55pm. We finished about 10:15pm. I think with experienced players, a 3-4 player game should always finish in less than 2 hours. Both games finished within 2 minutes of each other. Ben apparently pulled out the victory in the other game.