If I'm already this far behind on Germany / Essen posts, it won't hurt to insert a post with some weekend gaming. Plus, three of these games are Essen releases that many of you are probably interested in.

Saturday and Sunday were spent assembling another batch of Havoc releases - we are in a pretty good rhythm and should finish the rest of the product by next weekend. Saturday evening we took a break, left Matthew in charge of Jacob and Brandon, and headed for nearby Newberg to visit our friend George's new digs at a house-warming party. George is a gamer, so of course we brought games. And Havoc.

First up was the new Railroad Dice 2 game from Wassertal, a remake of the original game that is apparently quite different (I never played it). I tried this once at Essen, but the game was aborted as we played it so horribly wrong that, well, we weren't even playing the game. The main objective is to build connections from your home station to each of the other stations, and transport passengers from remote stations back to your own. This earns "money" (the same tokens are used to track passengers and income). 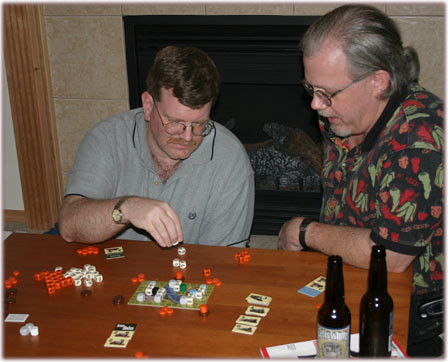 In my aborted game, we didn't realize that all connections had to be direct and couldn't pass through other stations. This made the process of reaching all the stations rather simple and anti-climatic. Anyway, we appeared to play correctly this time around and I found the game to be solid and enjoyable. Space is very tight and the economic system of buying locomotives, connecting towns, using complex dice, and transporting passengers made the game feel like a very light weight and streamlined Age of Steam. Our main complaint - replacing a simple die with a complex die when it is in the middle of a cluster. We are thinking of using a pencil with gum on the end of it next game.

Next up was a large group game of Liars Dice, one of my favorite light party games. We played with a Perudo set and Newberg rules. Ask me about them sometime. 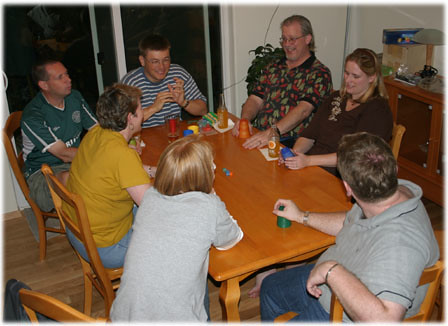 This game was a load of laughs - I held strong for a long time but lost some dice quickly and ended up in bad shape for a final showdown with Mike (3 dice to 1). This is a near impossible situation to be in and he pulled out the victory.

Julie, KC, Rita, Ken, and I then drove back to Sherwood. All of us but Julie were still up for one more game, so we pulled out the Essen hit Shear Panic. I sort of missed out on buying this game - Peter Loop asked me to buy a copy for him at Essen, but they had sold out before the show and only had pre-orders left. I was lucky enough to snag a copy from Tom (who lucked into his copies as well) but unfortunately this copy needs to go to Peter. I say unfortunately because this is a pretty nifty little game.

I didn't know what to expect, though I had an inkling after playing Leapfrog at a work lunchtime event with Eric. The game oozes them - how can you not love these little sheeps? The game passes through several phases where you try and maneuver your two sheep into a position to score the most point. The most important scoring round is the last one, when the sheep are being lined up to be shorn. You don't want to be near the front of the flock at this point. Witness my yellow sheep in the photo. 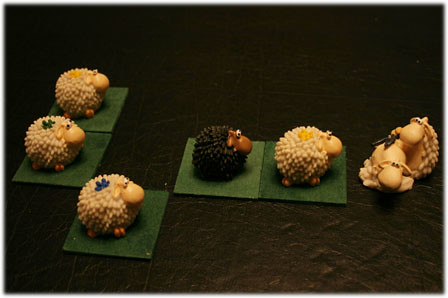 Players have a card of actions they can take throughout the game that allow them to change the configuration of the flock. Sometimes the flock gets segregated (as in the photo above), forcing a regrouping of the sheep according to certain rules. This is not a light game, though it needs to be taken lightly. I really wish I had picked up my own copy, but with KC, Eric, and Peter (and Mike?) owning copies I guess I'll be able to play it enough.

Sunday afternoon after finishing assembly, KC, Rita, Ken, and I sat down to try the much hyped Caylus, another Essen release. You can learn about the mechanics in a review at the 'geek - I'll just share some first impressions here. 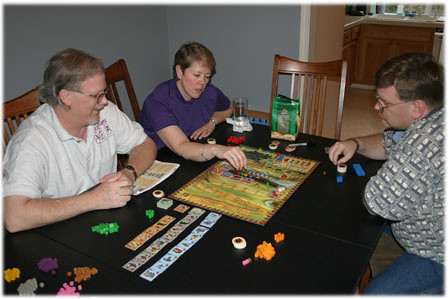 At first we all had the impression that this is an excellent game. Sometimes you just get that feeling - the mechanics work well together, things just make sense. We all struggled with our choices, experimented with different (mostly unsuccessful) tactics, and made huge mistakes (well, everyone but Ken I think). 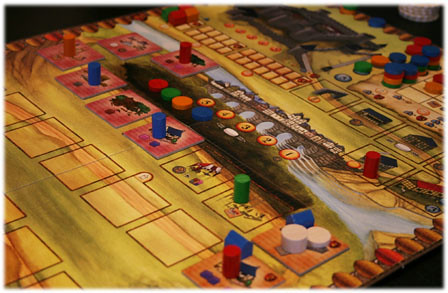 As we hit the mid game, I started to feel a little less enamored, mostly because Ken was far out in the lead and appeared unstoppable. This is more a result of how the rest of us played the game, I think, then a flaw of the game itself. There were no luck dice rolls, no arbitrary reasons why he jumped out. He focused on getting building ownership early on, while the rest of us were probably a bit too preoccupied with the castle. This provided a strong annuity in prestige for Ken that he carried to victory.

Money is very tight in the game and must be watched carefully - I was reminded of both St. Petersburg and Oltremare in that regard. I made very similar mistakes in my first play of those two games and I suspect I'll play much better the second time around in Caylus.

I really do hope this game is as good as everyone is claiming it to be, but I'll reserve judgment for a bit. I'm sure it will come out again this coming weekend.